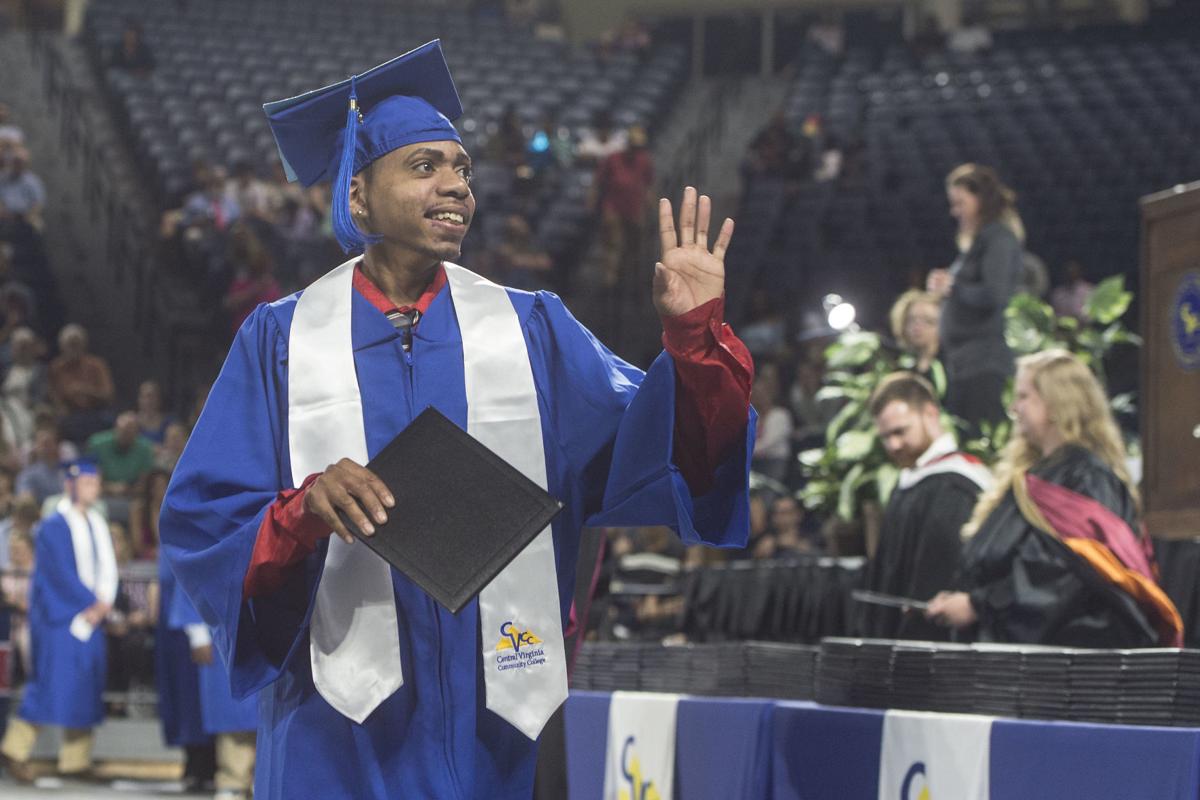 LYNCHBURG, VA - MAY 10: CVCC graduate Jeffrey Jones waves to family and friends during graduation at the Vines Center on Thursday, May 10, 2018 in Lynchburg, Va. (Photo by Jay Westcott/The News & Advance) 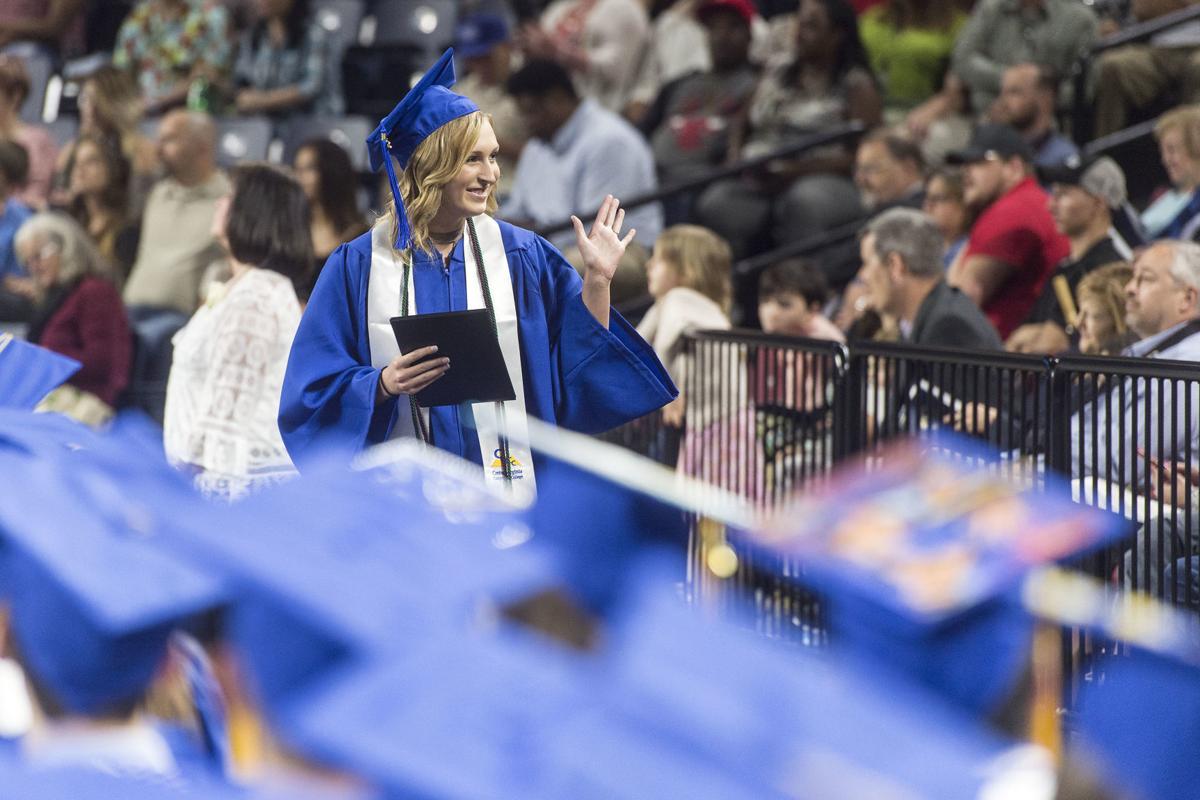 LYNCHBURG, VA - MAY 10: Katy Godsey waves to family and friends after receiving her diploma during CVCC's graduation on Thursday, May 10, 2018 in Lynchburg, Va. (Photo by Jay Westcott/The News & Advance)

LYNCHBURG, VA - MAY 10: CVCC graduate Jeffrey Jones waves to family and friends during graduation at the Vines Center on Thursday, May 10, 2018 in Lynchburg, Va. (Photo by Jay Westcott/The News & Advance)

LYNCHBURG, VA - MAY 10: Katy Godsey waves to family and friends after receiving her diploma during CVCC's graduation on Thursday, May 10, 2018 in Lynchburg, Va. (Photo by Jay Westcott/The News & Advance)

The announcement about construction at Liberty University’s Vines Center now has officials at two dozen schools adjusting their graduation plans.

The university said in a Jan. 15 news release that construction to replace the center’s current leaking roof before the 2020-21 school year will begin in the spring — the throes of graduation season — and continue through the summer. The university is working to find suitable alternate graduation ceremony locations on its campus, according to Central Virginia Community College and Campbell, Bedford, Amherst and Appomattox county public school officials.

Chris Bryant, vice president of institutional advancement at CVCC, said the community college is contracted to hold its May 14 graduation at the Vines Center, but last week the university told CVCC there are three other indoor locations it can use. Bryant said CVCC is working to determine which will be the most appropriate for its needs.

“Our relationship with Liberty is a strong, strong relationship,” Bryant said. “We definitely will take them up on their offer to have a different venue.”

Ryan Edwards, spokesperson for Bedford County Public Schools, said the district has been holding its three high school graduation ceremonies at the Vines Center since at least 2005. Edwards said the district was informed of the construction conflict on Jan. 15, seven months after signing the contract with LU. He said the division notified seniors’ households that evening via email and phone.

Edwards said he was unaware if the change could impact the cost of the graduation ceremony or the district’s current graduation date of May 30.

According to a Facility User Agreement between LU and BCPS dated June 13, 2019, LU agreed to grant BCPS the right to use the Vines Center and its facilities for its graduations on May 30 from 7 a.m. until 8 p.m. at a cost of $4,400 per ceremony. This cost includes Liberty University Police Department services, an event manager, custodial staff and sound production staff. In addition, the school division agreed to pay for an additional $350 video-streaming service provided by LU.

According to the agreement, BCPS’s total user fee of $13,550 was due to LU no later than 14 days prior to the event. The agreement states that had BCPS canceled the contract, the district would have been responsible for paying at least 50% of the user fee. No ramifications are outlined in the agreement to address a situation in which LU breaks the facility user agreement. Edwards said BCPS will provide more information to its community once alternative graduation plans are finalized with LU.

Scott Lamb, senior vice president of university communications for LU, said each facility user agreement may contain similar language, but the details are specific to each individual event and facility.

Clay Stanley, assistant superintendent for instruction for Campbell County Schools, said Campbell County was informed of the conflict on Jan. 15 as well. Stanley said the university is in the process of finding an alternative location on its campus for the June 5 and June 6 commencement ceremonies of Campbell’s four high schools. Campbell County high schools have been using the Vines Center for graduation for at least 10 years, Stanley said, with Brookville High School having the longest history with the venue.

Stanley said there is no current plan to change the dates or times of the graduations.

Amherst County High School’s graduation ceremonies have been held at the Vines Center for more than a decade. Amherst County Public Schools Superintendent Rob Arnold told The News & Advance last week that LU is working to find a “suitable alternative venue for us on the Liberty campus” to host the high school’s May 23 graduation.

Carrington Pritchard, administrative assistant to the superintendent for Appomattox County Public Schools, said Appomattox County High School’s 2020 graduation will be held on LU’s campus on the original planned date of May 18.

“LU has informed us that they will be honoring our original event contract, but with a location change due to construction on the Vines Center,” Pritchard said in an email.

Lynchburg City Schools also intended to use the Vines Center to host graduation for its two high schools for the first time this year. Following the construction announcement, LCS moved the ceremonies back to the respective schools.