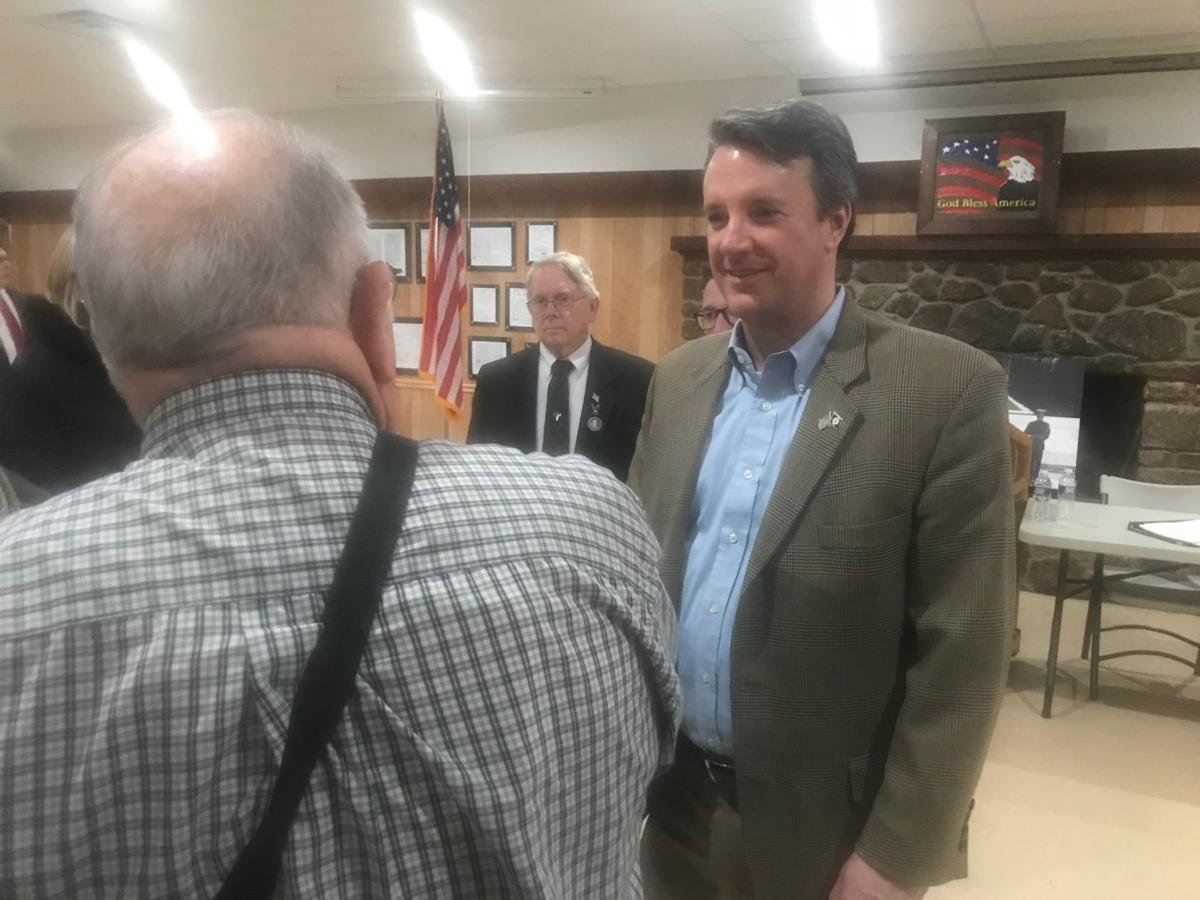 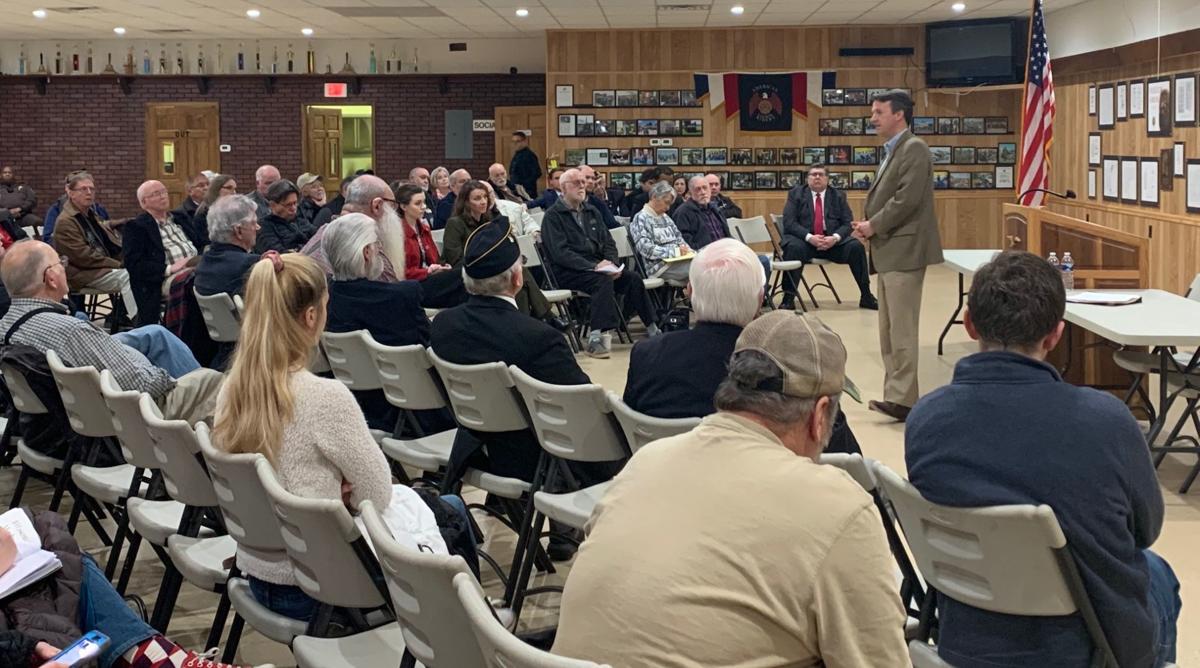 As the third day of the impeachment trial of President Donald Trump unfolded Thursday, Rep. Ben Cline, R-6th District, was on the front line in Trump’s defense during a town hall in Lynchburg attended by about 100 people, including many veterans.

Cline, in his second year of representing a district that includes Lynchburg, Amherst County and part of Bedford County, has vocally criticized the U.S. House of Representative’s push for Trump’s removal, calling it a rushed process that resulted in a bad case and flawed articles of impeachment. The evidence is lacking, he said, and he feels acquittal soon will result.

“It’s destined to fall short so all of this, the politics that we’re going through right now, we could be addressing some of the issues that are more important to voters,” Cline said in an interview following the town hall at the American Legion Post 16. “I hope we can get back to that when this is over.”

Cline said he feels the Republican-led Senate is conducting a fair trial and Democrats’ claim of a cover-up if certain witnesses aren’t called is insulting and could backfire.

“I don’t think they will make much of a case,” Cline said.

Lynchburg resident Judith Wilson was among a few who voiced criticism of Trump.

“The fact is that we do have someone who is consistently doing things that should not be done in our government,” Wilson said. “And he does need to be called to task. That’s the part that I think should be bipartisan.”

Cline said he approaches the matter from an attorney’s point of view and he sees the impeachment as moving forward without a mountain of evidence or a criminal violation.

“They’re stuck with what they’ve got, which is a faulty case. We’re going to see exactly what that gets them,” Cline said. “I don’t think the evidence is there for high crimes and misdemeanors to remove this president from office.”

He said he believes the Senate will send a strong message to the House to self-correct so the impeachment process doesn’t become a regularly used political tool. “It’s a sad situation we’re in right now and I’m sorry the country is going through it,” Cline added.

Wilson said if impeachment is not successful she hopes voters will remove Trump from office at the polls in November.

Ken Smith, a local Army veteran, took issue with some of Trump’s negative comments directed toward the late Sen. John McCain, as well as other remarks aimed at top military leaders.

Smith said he also feels some of Trump’s comments are demoralizing and won’t lead to a better America. “One of the views that I would like you to take back to Washington is we need better leadership, and to support anybody who has this attitude to our military personnel is personally an affront, I think, to all veterans,” Smith said.

Cline said he thinks Trump through his legislative agenda and policies has demonstrated clear support of servicemen and women. “Some of his rhetoric is that of a New York businessman,” Cline said in response to remarks Smith pointed to. “I am neither a New Yorker nor a businessman.”

He also complimented Trump’s “aggressive” foreign policy, including the Jan. 2 killing of Iran General Qasem Soleimani. Cline called the top military general a terrorist who has been committing acts against the United States for years, resulting in hundreds of injured and dead Americans. “I’m glad he’s gone,” Cline said. “It was the right thing to do.”

Cline later said he believes Trump is doing a good job for the country, the economy and fighting terrorism abroad and he is happy to field those questions and explain why Americans need to support him.

During the two-hour meeting, he also spoke on a host of topics including issues facing veterans, climate change, social security and health care.

The Second Amendment and proposed gun legislation in the Virginia General Assembly also drew heavy discussion. Cline, a former delegate who represented the 23rd House district for 16 years before his November 2018 election to Congress, said he fully supports the right to bear arms, which he described as under attack in Virginia with the new Democratic majority in the state legislature.

He said the results of the November election that led to Democrats seizing control of the statehouse is waking up a lot of Virginians and he believes next year they will elect a pro-life governor who respects the Constitution and the Second Amendment. “Which we don’t have right now,” he added.

On abortion, Cline said he is concerned the new Democratic majority could roll back many of the past pro-life successes in Virginia’s laws.

Luchy Alvarado, of Lynchburg, was among a few women who are part of Moms Demand Action, a grassroots movement of Americans fighting for measures that protect Americans from gun violence. She said she’s become more politically involved since Trump’s election and while canvassing among voters she’s heard directly gun legislation, either for or against, is even more popular a topic than health care.

Cline said he recognizes the rise in gun violence across the country is leading to gun control debate and he believes mental health is an area to focus on and ensuring those with mental issues who commit violent have access to treatment they need.

“There are very few proposals out there that would solve the problems that people are trying to address,” Cline said in the interview of proposed gun legislation in Virginia. “Better solutions involve mental health and appropriate funding for treatment and not taking away the Second Amendment rights of law-abiding citizens.”

Cline encouraged residents to get engaged in the political process while rising above a divisive climate, fueled in large part by social media. He urged face-to-face interactions where people can disagree respectively.

”We’re all going to have to get together and pull if we’re going to get this country back on track.”

Although a comment from Judith Wilson about the November presidential election was followed by applause, it is unclear whether the applause was specifically in support of Wilson's comment.