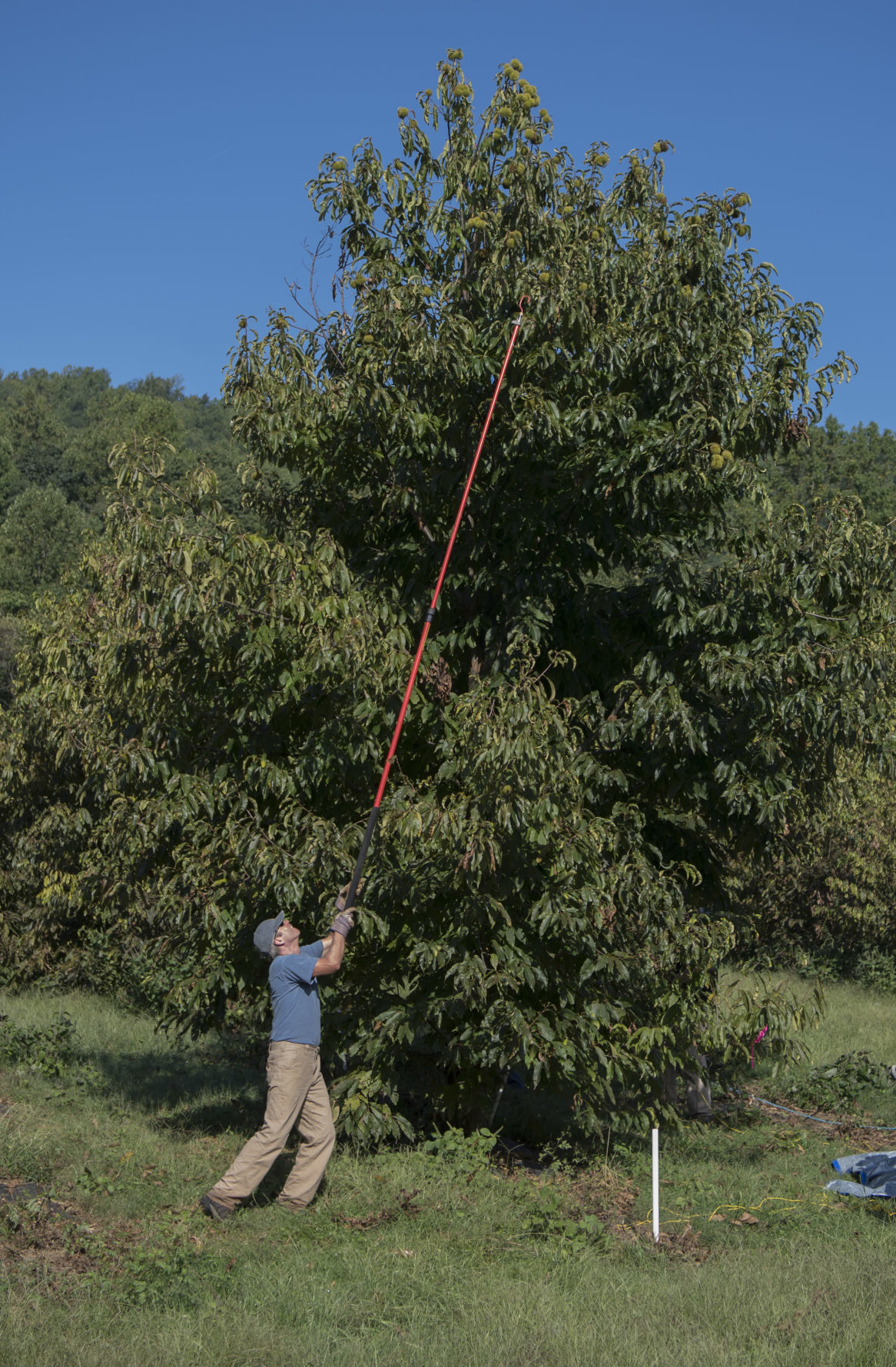 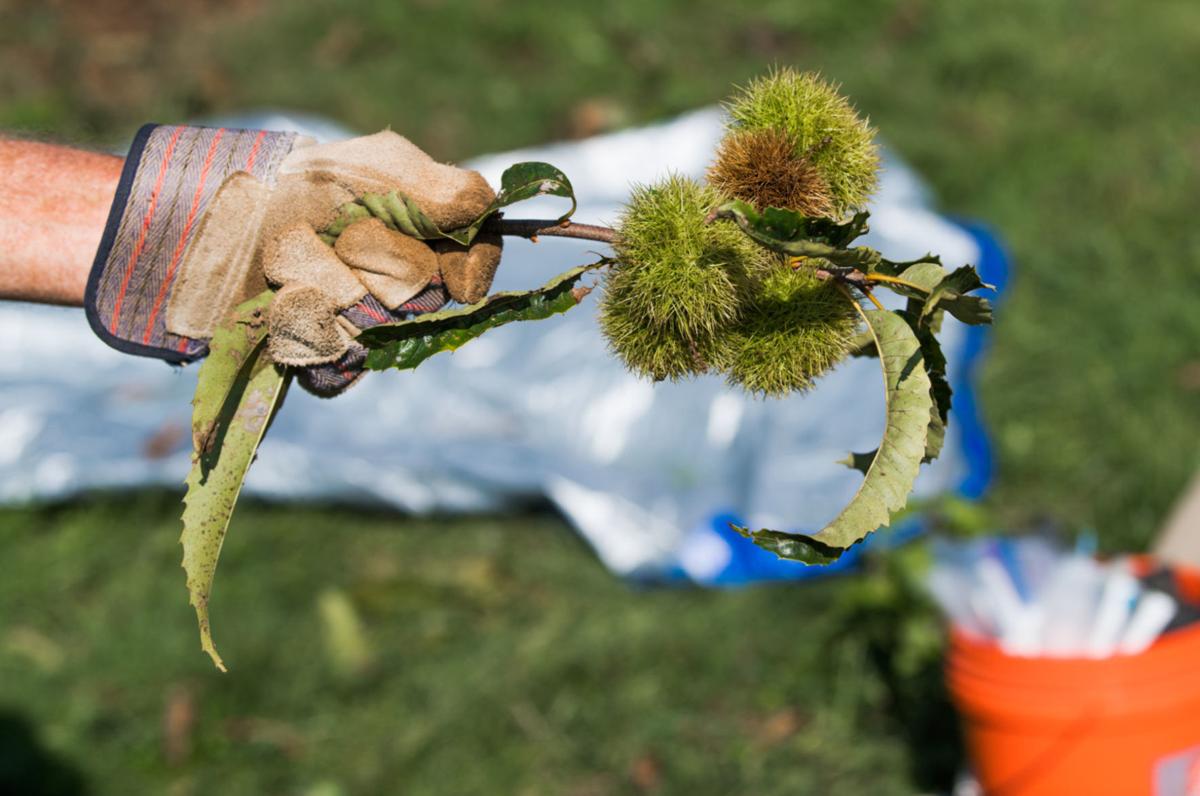 A cluster of chestnut burrs pulled from the tree.

A cluster of chestnut burrs pulled from the tree.

For Tom Saielli, science coordinator for The American Chestnut Foundation, this time of year means the foundation is one step closer to completing its mission: restoring and conserving healthy forests. That starts with finding a way to grow blight-tolerant American chestnut trees that can produce healthy nuts.

“Our mission isn’t to bring back American chestnut trees. If we can pull this off it serves as a template to work on other species also being attacked by pests and pathogens,” Saielli said.

In order to do so, TACF is using a number of modern tools to cross blight-tolerant Chinese chestnut trees with American chestnut trees.

A blight fungus from Asia was introduced accidentally in the early 1900s and killed the American chestnut trees as a mature forest tree by the 1950s. Saielli said the blight is considered “the worst ecological disaster of our time.”

Now, with the use of backcross breeding, a method of transferring one of a few genes controlling a specific trait from one line to a second, and other newer technologies, TACF hopes to produce American chestnut trees that can withstand blight and continue to reproduce.

“We started with a hybrid of a pure American chestnut and a Chinese chestnut tree. So you get about 50% intermediate resistance,” Saielli explained.

The chestnut expert went on to explain at that initial point, the tree wasn’t American enough to be considered a good replacement for the American chestnut tree, so they continued the backcross breeding process.

“This is a B3 orchard, meaning these trees were backcrossed with American trees three times,” Saielli said looking out at the trees in the orchard at Fortunes Cove on Sept. 16.

The trees the volunteers were helping to harvest are about 94% American chestnut. Saielli said he and others from TACF then contaminate each breed of tree they work to produce with blight fungus to test the resistance level.

“We want trees that can tolerate the blight and can continue to reproduce,” Saielli said.

Armed with thick gloves to avoid the prickly burrs, long pruning poles, rope with weights attached to the end, large tarps, and brown paper bags the volunteers were ready to spend Sept. 16 harvesting chestnuts from trees for TACF.

A group of 10 or so gathered around Saielli as he assigned each of the two groups a tree to start harvesting. The greenish, prickly burrs the individuals picked each were about the size of a small baseball. They used long pruners, thin ropes, and their protected hands to get the chestnut pods off the trees and open. Saielli explained they try to pick the burrs early before small, hungry critters get to them and before they fall to the ground and risk molding.

“Since we have so many volunteers if we can sit here and pry them open now, they can go right into the fridge now,” Saielli said.

Otherwise, the unopened pods would be put in a warehouse to finish ripening before the next step in the breeding process. The next step is putting them into a fridge to keep them cold so they can root. Saielli said chestnuts can root without a period of cold the wintertime would normally provide, but they aren’t happy and the happier the seed, the better.

“Then we can do anything from plant them directly into an orchard or pot them. Eventually these seeds will go into a seed orchard or they will be bred with another cross,” Saielli said.

While his mission with TACF is to develop abundant chestnut trees once again, other chestnut orchards in Nelson have the sole goal of production. The Virginia Chestnut, LLC — an informal chestnut cooperative in Nelson — does just this.

The Virginia Chestnuts, a local industry group founded in 2015, is made up of Seamans, Helbert, Hopkins, Breidablik, Bryant Farm and Nursery and Jefferson Farm. The growers of each orchard harvest their product and have the option to bring them to David and Kim Bryant for selling to the public every year.

David Bryant, of Bryant’s Orchard, said every year chestnut growers see improvement in production and this year is expected to be a good year for his 23 acres.

“We expect about 15,000 pounds of chestnuts,” Bryant said

Gazing out over the rows of chestnut trees filled with green, prickly burrs on his orchard on Sept. 25, he chats with Carter Parr, manager at Seaman’s Orchard in Roseland. Unlike Saielli and the volunteers at Fortunes Cove, he and Parr wait until the burrs are ripe on their own and fall before harvesting, processing, and selling them. Chestnuts will be for sale at the end of September, but Bryant said peak sales start in November.

“We’re trying to get folks aware that chestnuts are an option again,” Bryant said referring to the blight fungus.

Bryant’s trees, as he guessed most production chestnut trees are in Nelson, are a Dunstan variety; about 95% American and 5% Chinese. They are blight resistant and produce mahogany colored, medium sized chestnuts.

Parr expects to harvest a couple thousand pounds from his three acre orchard.

“We planted them in 2012 after talking with David. We wanted a little more diversification at Seaman’s,” Parr said

Virginia Chestnuts sell all around the United States, primarily in the Mid-Atlantic region. After harvesting and storing in temperature-controlled storage, the nuts go through the proper cleaning and sanitizing process before Bryant sells the product for consumers to have for the holiday season.

Bryant said chestnuts usually sell for between $8 and $10 per pound.

Challenges include the expenses that go into growing chestnut trees and convincing the public that not only are chestnuts available again, but they can be bought fresh and locally.

“They are a great product. They are gluten-free and fat-free and make for a great snack,” Bryant said.