Fairgoers had plenty of hay to sit on and listen to the live music during the Amherst County Fair in August. The event was held Aug. 15-18 on Sweet Briar Drive near U.S. 29 Business in Amherst. 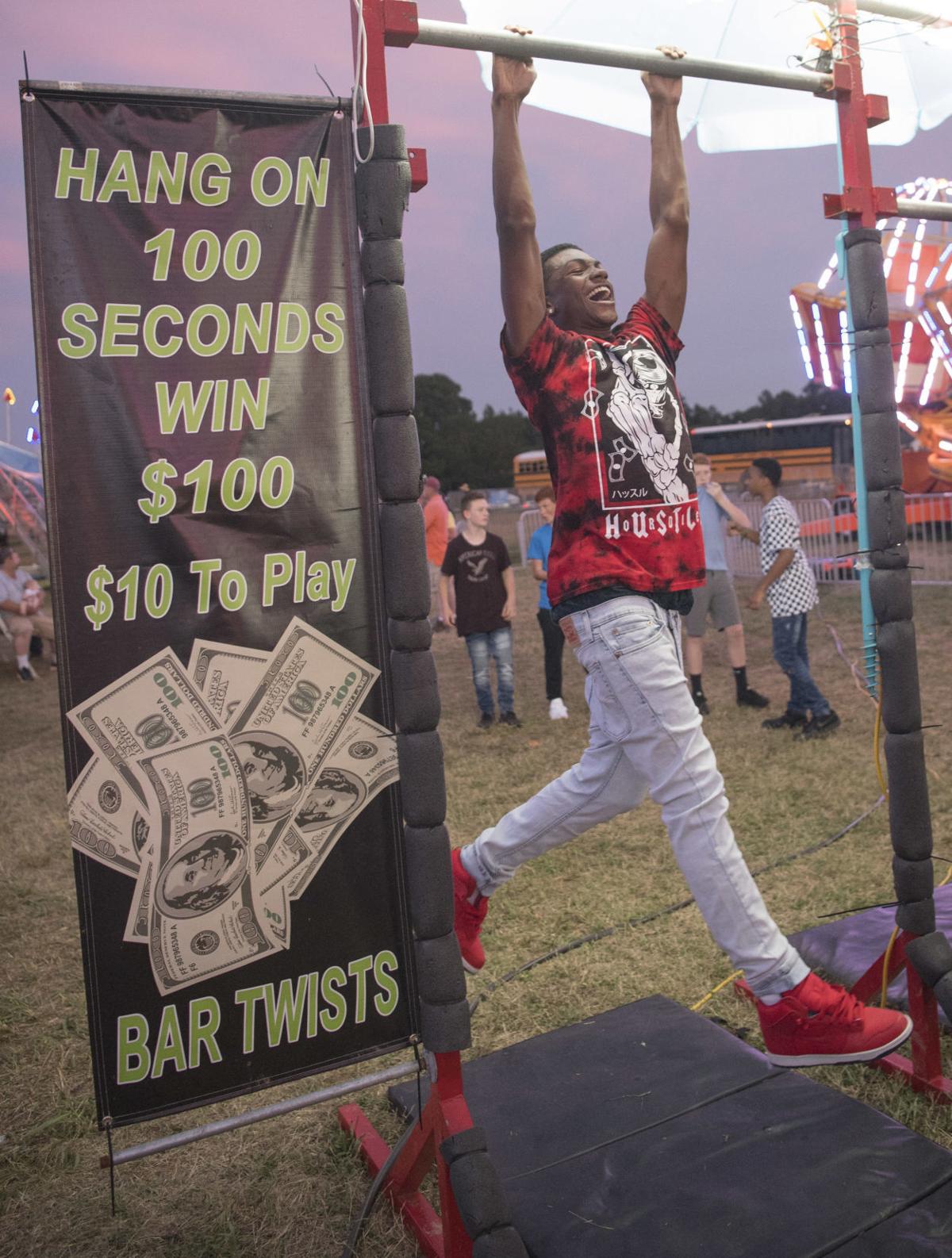 In this August 2019 file photo, Bobby Greene attempts to hang on to the bar for a prize during the Amherst County Fair. 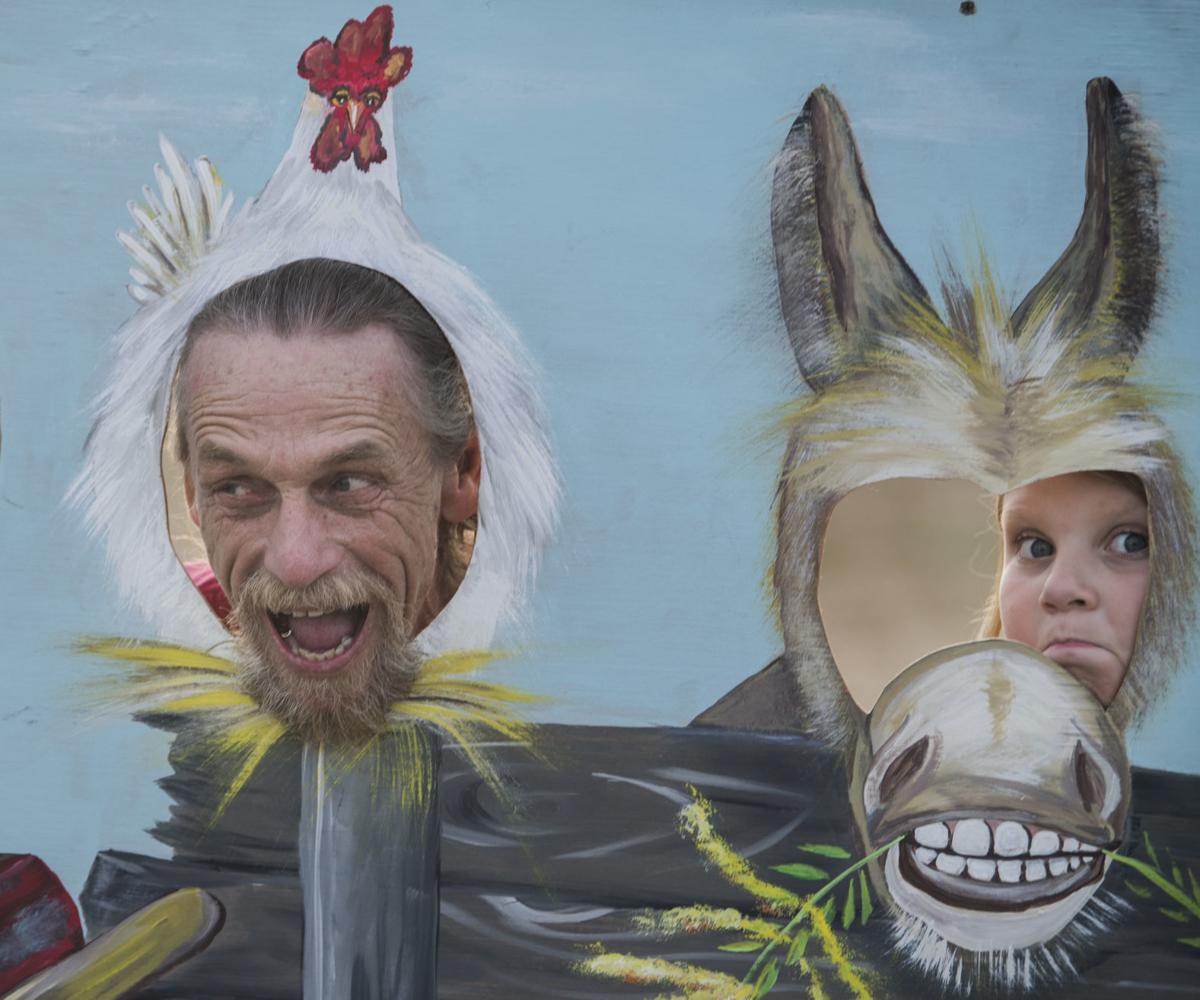 John Edwards, left, and his granddaughter Chloe Edwards get their photos taken while standing behind farm animal cutouts during the Amherst County Fair in August.

Fairgoers had plenty of hay to sit on and listen to the live music during the Amherst County Fair in August. The event was held Aug. 15-18 on Sweet Briar Drive near U.S. 29 Business in Amherst.

In this August 2019 file photo, Bobby Greene attempts to hang on to the bar for a prize during the Amherst County Fair.

John Edwards, left, and his granddaughter Chloe Edwards get their photos taken while standing behind farm animal cutouts during the Amherst County Fair in August.

The prospect of the Amherst County Fair returning in 2020 took a major blow following a failed vote by the county’s board of supervisors on Nov. 19 to provide a major share of the funding needed for the event.

The board voted 2-2 on Nov. 19 with Chairman Jimmy Ayers and Supervisor David Pugh opposed and board members Claudia Tucker and Kenneth Campbell in favor of appropriating $80,000 from the county’s unobligated general fund balance toward the fair. Supervisor Jennifer Moore was absent.

The decision means, absent a major influx of cash from other sources or the board revisiting the matter, the fair will not take place in August 2020 as previously envisioned. County Administrator Dean Rodgers said without the $80,000 allocation, there will be no fair next year. The board is expected to take up the matter again at its Dec. 3 meeting, according to Rodgers.

The fair was revived in 2018 after not being held in Amherst for several decades. In two separate four-day events in August the past two years, the event was held in a field on Sweet Briar Drive near U.S. 29 Business in Amherst, drawing thousands.

The board was requested during its Tuesday meeting to allocate about $40,000 for a full-time director and another $40,000 for seed money for expenses and the preparation of a new planned fairground at Winton Farm, a golf course and country club on more than 250 acres off Virginia 151 in the heart of the Clifford community.

Ayers and Pugh said they didn’t think the county could afford the appropriation while facing a tight financial year in the county’s looming 2020-21 fiscal year budget. Rodgers publicly has said he expects to seek a real estate tax increase next year as a trend of expenses outpacing revenues continues, though an exact proposal has not yet been presented.

The county also has discussed the need to bring a wide range of county employees’ salaries up to where they should be, a measure that if approved is expected to cost more than $400,000, according to a study presented to the board in early 2019.

“We are facing some challenging times next year,” Ayers said. “I’ve got some reservations about another full-time position. We know we have a problem with recruitment and retention [of county employees]. ... My concern is to take care of our staff.”

Supervisor Claudia Tucker said the timing was crucial and the board needed to be “in or out” with its decision.

Tucker said thousands of people came together, laughed and had wonderful experiences at the previous fair.

“What we saw with this fair was a sense of pride in Amherst County,” Tucker said. “... It was a wonderful community event.”

She said she has a problem with the county no longer having it. “We’re going to raise their taxes, we’re going to take their fair,” she said of the effect on county residents.

“The fair is not self-supporting,” Pugh said of costs. “The fair is getting more expensive.”

Rodgers said intense heat in this year’s event, as well as rain, cut into attendance, which hurt the overall bottom line despite collections at the gate nearly doubling, the same volunteers participating at a 40% lower cost and a 43% uptick in in-kind donations.

“The goal remains for the fair to pay its own way,” Rodgers said. “Had we not had the heat, our receipts would be higher.”

The layout of Winton Farm would eliminate the need for shuttle busing and lead to fewer deputies used for security, according to Rodgers. While Winton’s location would be more cost-effective, a new fair director position is needed to begin soliciting vendors and sponsors and prepare the site, he reported to supervisors.

“I don’t want to see the fair go away, that’s for sure,” Campbell said.

Ayers said he also doesn’t want to see the event come to an end but noted the $80,000 figure is the highest the board has been asked to contribute in three years and the pressing weight of county needs is too great.

“With the challenges we’re facing, I just can’t do it,” Ayers said.

Ayers told Rodgers alternative sources for funding could be pursued. Rodgers said he is not in a position to knock on doors in soliciting financial support. With the board’s 2-2 deadlock, the motion to fund the $80,000 failed.

When asked about board procedures on tie votes following the meeting, Rodgers indicated supervisors could revisit the matter if they so choose.

“Think of the joy that fair brought to Amherst County,” Tucker said in lamenting the failed vote.