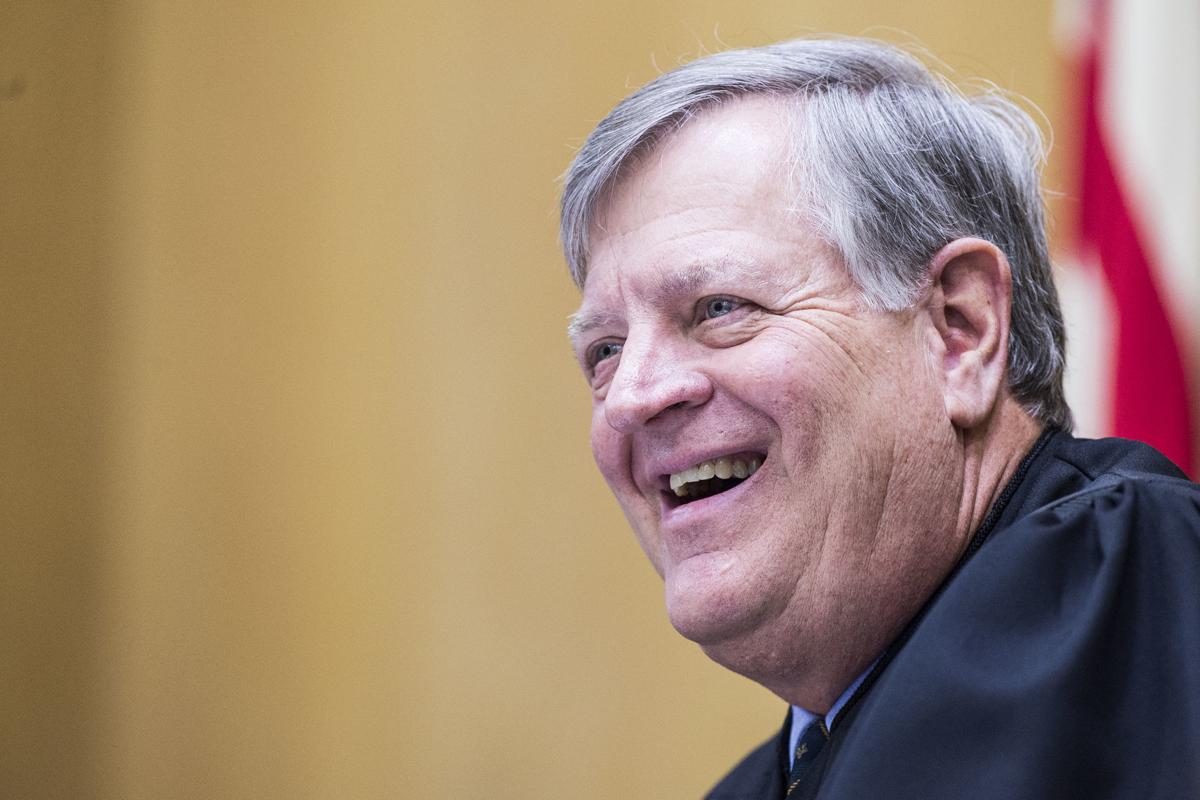 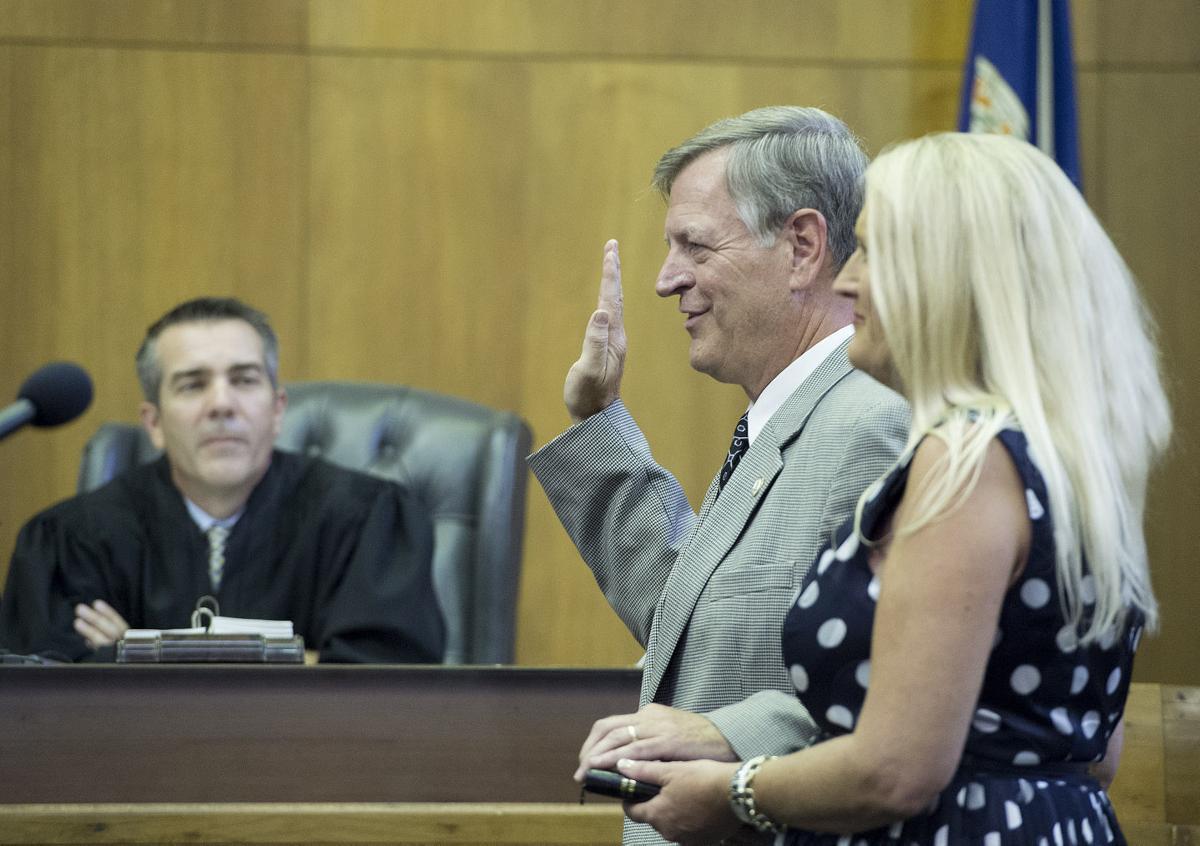 In this July 2015 file photo, Ed Burnette is sworn in as circuit court judge in Lynchburg. 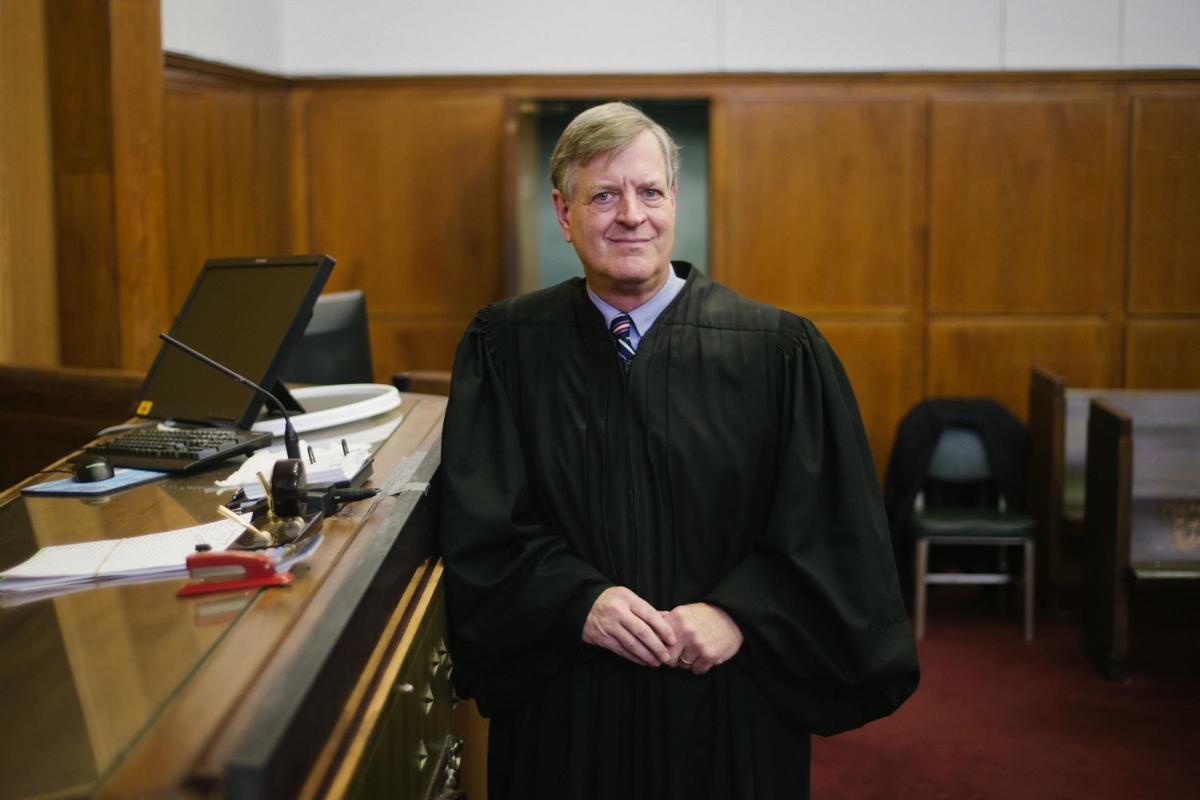 In this March 2015 file photo, Lynchburg Circuit Judge Ed Burnette is shown when he was a general district judge, shortly before he was sworn in as a circuit judge in July 2015.

In this July 2015 file photo, Ed Burnette is sworn in as circuit court judge in Lynchburg.

In this March 2015 file photo, Lynchburg Circuit Judge Ed Burnette is shown when he was a general district judge, shortly before he was sworn in as a circuit judge in July 2015.

In retiring from his post as Lynchburg circuit court judge, Ed Burnette may have ended a 42-year law career, but his professional engagement, leadership and mentorship are considered by many in the legal field to be lasting assets in Lynchburg and statewide.

“Ed has distinguished himself from the moment he started practicing law,” said Robin Wood, a former colleague.

Burnette worked with the Edmunds & Williams firm from when he graduated law school in 1978 until he was appointed as a general district court judge in 2001. He held numerous positions in the Virginia State Bar (VSB) during that part of his career, notably as president from 1993 to 1994 — at 39, the youngest person to hold that position.

From a practice he said didn’t get him out of the greater Lynchburg area much, the position introduced him to lawyers across the state and the country. His work with the bar and his involvement in the Young Lawyers Conference established VSB’s R. Edwin Burnette Jr. Young Lawyer of the Year Award, which he personally presents.

Wood, who has stayed with Edmunds & Williams through its 2016 merger with Woods Rogers, said Burnette was a leader in the firm and “had the expertise to be a judge from the moment he stepped on the bench.”

Attorney Bill Phillips said Burnette was “instrumental” in his decision to return to Lynchburg after school to practice law, deciding to join the same firm. There, he said Burnette’s door was always open to field questions on being a trial attorney, despite hefty workloads.

His affinity for mentorship followed him as a judge, helping two other general district court judges get accustomed to their position before he moved up to Lynchburg Circuit Court in 2015.

Burnette credited the Virginia Supreme Court’s judge mentorship program in connecting him with Danville’s Judge Joseph Milam Jr. to learn the ropes in the higher court. He’s encouraged mentorship offered by the Lynchburg Bar Association to lawyers starting out but said he’s puzzled and disappointed that many aren’t taking advantage of that.

The lay of the legal land has changed since Burnette was in the Young Lawyers Conference: more young lawyers are opening up their own practice instead of joining firms, he said, and local bar membership isn’t as ubiquitous as it used to be.

“I think the concern I have is that the practice of law, where you are usually going to have contact and have to work with other lawyers just by the nature of the practice, not having those personal relationships makes it much more difficult, frustrating and stressful than it needs to be,” he said.

Ever one to encourage civility and professionalism among attorneys who oppose each other in the courtroom, Burnette has helped the state set those expectations as standards.

During his time on VSB’s legal ethics committee, he said members found themselves dissatisfied with the results they were coming to for advisory opinions, deciding, “’Let’s change the rules.’ And so we did.”

As president, he formed a new committee to review and overhaul those rules over the next few years — composed of “a wonderful cross-section of solo practitioners from small towns to the big city lawyers and the big firms,” including Donald Lemons, now chief justice of the Virginia Supreme Court. That committee adopted model rules of professional conduct, which Burnette said made for a significant change that bucked the status quo.

Even after hanging up the robe at the end of 2019, Burnette will continue guiding his juniors. He’ll continue to teach trial advocacy at Washington and Lee and started teaching as the first Jurist in Residence at Liberty University School of Law last week.

Three attorneys have submitted their names in hopes of replacing him on the bench in Lynchburg Circuit Court. For his part, Burnette has contacted legislators and requested his successor be willing to take on the Lynchburg Drug Court, a venture he and a team of others have piloted for the past two years. A treatment-based alternative for people with addiction issues, the drug court model is one of several specialty dockets in Virginia that give the courthouse a different role than in typical criminal or civil dockets.

That shift has gone beyond what Burnette called the basic “umpire” role for judges.

“What has happened since then is a desire for the courts to be more involved in problem solving,” he said. “… The courts are peeling away the layers and saying, ‘Well, what’s really going on here? Why are we really here?’”

While that approach gets to the meat of problems at hand, he also sees a growing gap in people who need legal services but cannot afford them and the legal issues they face becoming more complex.

“Access to justice, at the end of the day, is what we’re talking about,” he said. “And if you don’t have the legal representation, unfortunately the system doesn’t work the way it should in protecting everyone’s rights.”

Unlike some, Burnette won’t be serving as a substitute judge who steps in to hear cases. He said he wants to truly shift gears with his retirement, “trading crime, conflict and dysfunction for music, golf and scuba.”

Part of that is getting back with his old band, visiting family and friends, “taking a hard look at my bucket list” and getting to the Masters Golf Tournament one day.

Burnette bid farewell to the clerks, bailiffs, attorneys and others who work in the courts with a note on his door that jokingly read, “The end of an error.”

But to those who’ve seen his professional drive and decorum, his 18 years on the bench have been anything but.