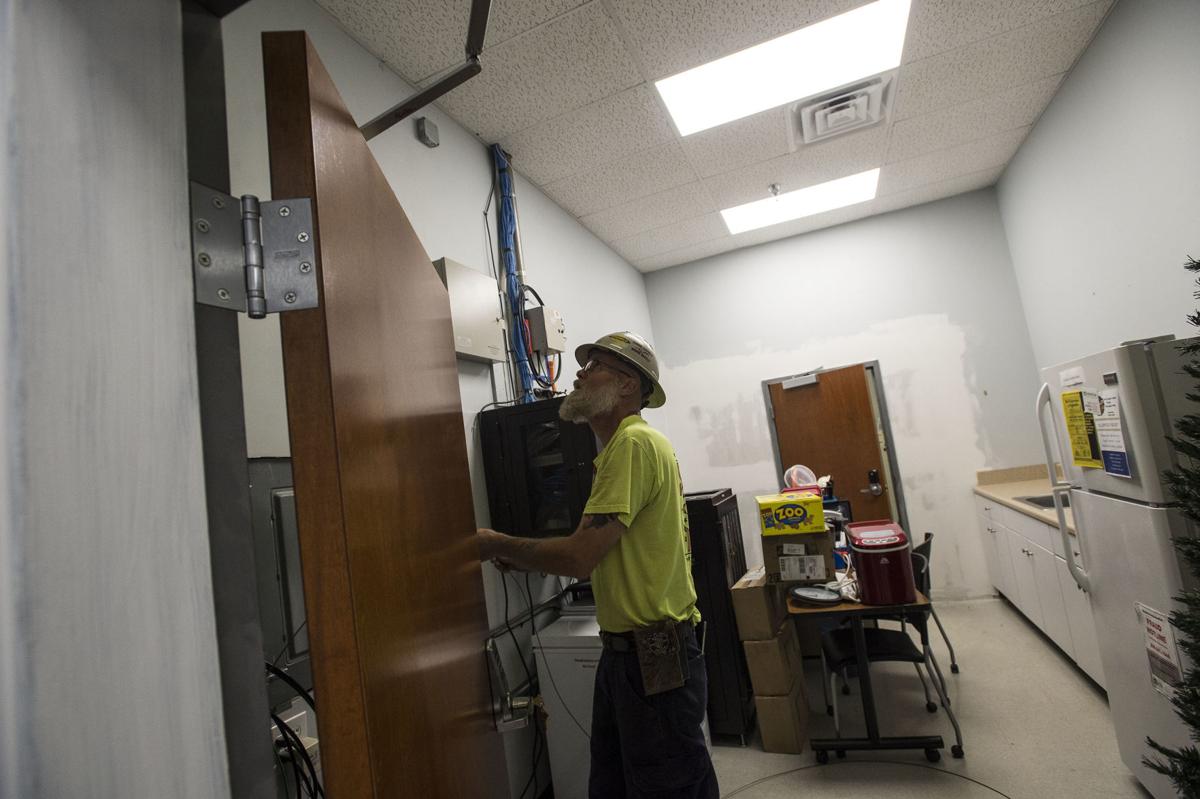 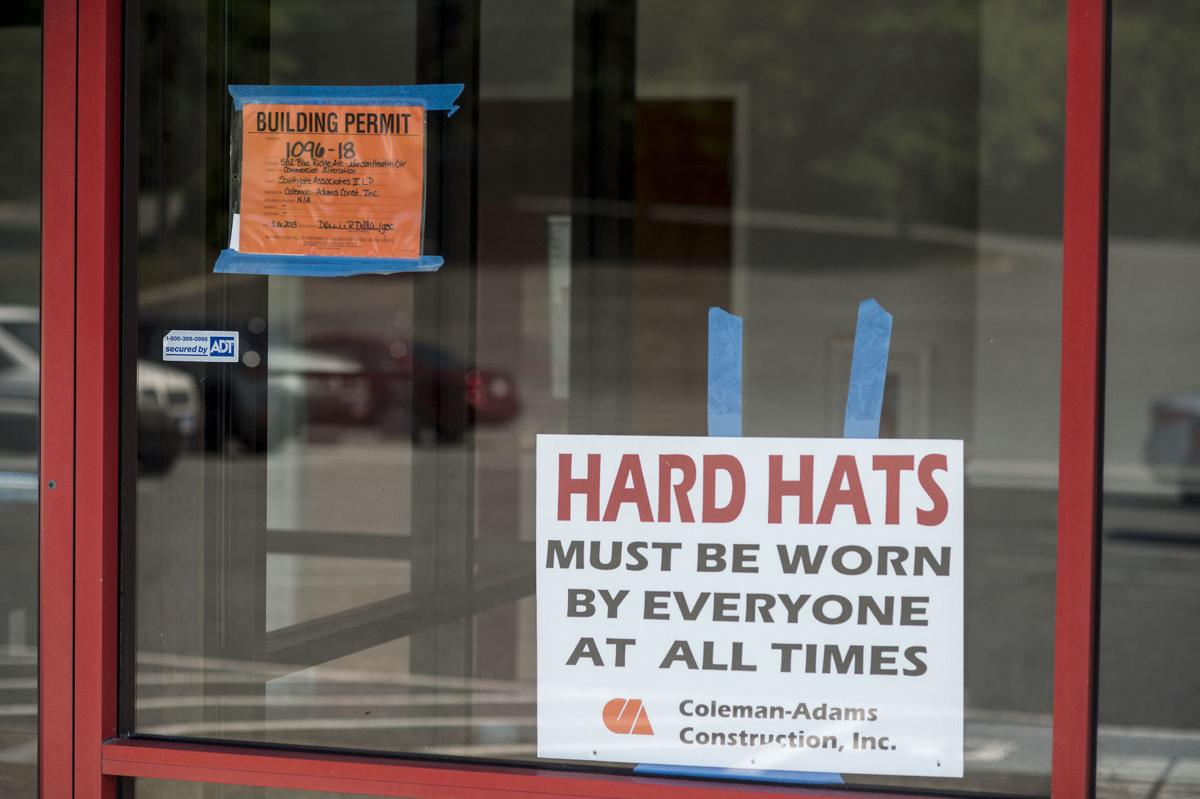 Signs note the construction at the Bedford Community Health Center, which will double the size of the clinic. 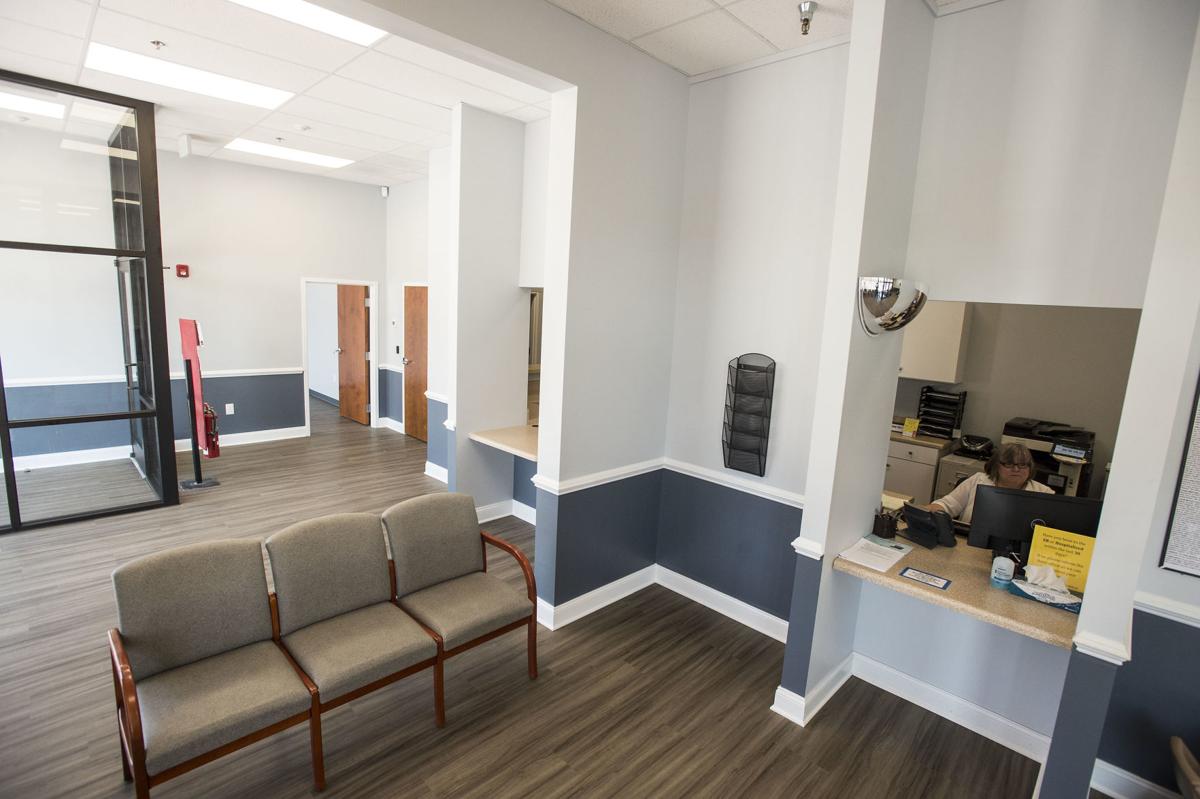 Receptionist Laura Maxfield works on her computer in the newly expanded reception area of the Bedford Community Health Center on Friday, June 1. 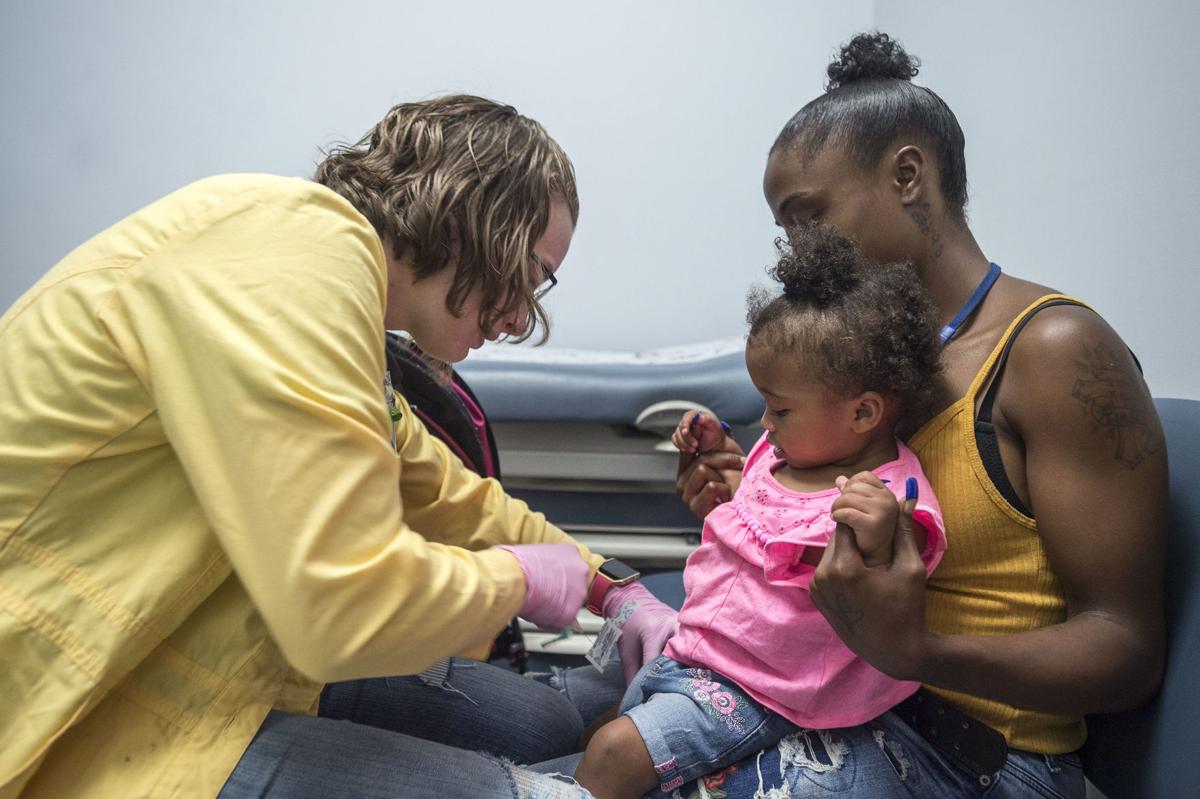 Pediatric medical assistant Ashlyn Lane, left, gives a shot to 1-year-old Jabrecia Sutton while her mother Ashley Sutton, right, holds her during a visit to the Bedford Community Health Center on Friday, June 1, 2018 in Bedford, Va.The clinic is anticipating a significant influx of new patients from the Medicaid expansion approved this month by the General Assembly.

Signs note the construction at the Bedford Community Health Center, which will double the size of the clinic.

Receptionist Laura Maxfield works on her computer in the newly expanded reception area of the Bedford Community Health Center on Friday, June 1.

Pediatric medical assistant Ashlyn Lane, left, gives a shot to 1-year-old Jabrecia Sutton while her mother Ashley Sutton, right, holds her during a visit to the Bedford Community Health Center on Friday, June 1, 2018 in Bedford, Va.The clinic is anticipating a significant influx of new patients from the Medicaid expansion approved this month by the General Assembly.

If all goes as planned Dr. Brian Freeman, Bedford County’s first certified buprenorphine physician, will be working in the county’s first office-based opioid treatment clinic at the Bedford Community Health Center before the year is out.

Until now, obtaining medication-assisted treatments for opioid addiction — whether suboxone, methadone or buprenorphine — required county residents to drive to a larger locality.

David Cassise, clinic director of the Lynchburg Comprehensive Treatment Center, the only free-standing clinic in Lynchburg that provides medication-assisted treatment, said in March more than 90 percent of patients relapse in the first year, without the help of suboxone, methadone or buprenorphine.

Cassise saw patient numbers rise from 221 in March of 2017 to 275 in March of 2018. Still, three years after opening the clinic, he estimates only about 10 percent of those who need treatment are getting it.

“We definitely have a drug issue here that we are dealing with,” Tomi Turner, Family Services manager for Bedford County Department of Social Services, said last week as she described seeing residents cope with trauma and mental illness with a combination of substances.

“The drug epidemic has hit us hard and it’s not just an opioid problem,” Turner said.

The potential impact of having a treatment clinic in Bedford was too great for Turner to even quantify last week as she talked about how an estimated 90 percent of the Child Protective Services reports her office gets are directly related to substance abuse. Not only does it help residents without reliable transportation or money to pay for rides, the clinic’s placement within the health center helps eliminate the stigma often associated with treatment, said Turner.

Virginia’s Secretary of Health and Human Resources Dr. Daniel Carey has called medication- assisted treatment of opioid addiction one of the most promising methods in the fight against the opioid epidemic. In an interview in March, Carey said, “abstinence, for some, can be helpful” but medication-assisted treatment gives people a much better chance of success.

The new program in Bedford comes after U.S. Sens. Mark Warner (D-Va.) and Tim Kaine (D-Va.) announced Virginia would receive more than $6.3 million in federal funds from the U.S. Department of Health and Human Services to combat the opioid epidemic.

Bedford and Nelson counties are the only local benefactors, each slated to receive more than $280,000.

“We’ve been fortunate that we haven’t had a huge number of deaths from opioids,” Martin said. “But we do have a growing number of people that are impacted by substance abuse, whether that is opioids or alcohol.”

Martin said the number of people needing intervention is on the rise for the social services and crisis-intervention services.

“Those are signs and symptoms of a bigger problem happening in a community,” Martin said. “I think we’ve seen the increase over the past two to three years.”

As is the case in Bedford, officials said substance abuse is directly contributing to the increasing number of children being removed from homes. Of the 20 children in foster care in Nelson County this past September, 14 were there because of drug-related issues, according to the county’s department of social services.

“It’s kind of heartening that the state and federal levels are recognizing that we need money to prevent” opioid abuse from becoming an epidemic in Nelson County, Martin said.

Officials with The Blue Ridge Medical Center and Johnson Health Center, the parent company of Bedford Community Health Center, said being present in the community is the first step in fighting opioid abuse. Neither county has mass transit, and health care is not cheap.

Stigma can be just as big a barrier to treatment as cost, which the BCHC aims to eliminate by putting the clinic in the health center where addiction is treated like every other disease.

Once established — Mehgan McCrickard, chief operations officer for the Johnson Health Center hopes “to get this off the ground by the end of this year” — the Bedford Community Health Center opioid treatment clinic can serve up to 30 patients in the first year. Officials intend to offer those who enroll, buprenorphine medication, individual and group counseling and dental services and psychiatry.

McCrickard said the clinic will offer buprenorphine and help make sure it is affordable for clients by ordering it from the on-site pharmacy that is being created.

Treatment will consist of a two- to three-day induction phase, where providers determine the patient’s needs, followed by a stabilization phase, which lasts a minimum of 12 weeks, according to McCrickard. During stabilization, patients visit weekly for counseling, medications, drug screens, withdrawal symptom assessment and more, depending on needs. The maintenance phase, which lasts for an indefinite period and is specific to each individual, reduces those visits to twice per month. Later visits can be reduced to monthly and patients can decide when and how to discontinue buprenorphine.

“It will all be case-by-case,” McCrickard said.

The funding also will enable the clinic to hire a nurse coordinator for the program and a pharmacy technician.

McCrickard said because buprenorphine is costly, many patients can’t access it. The clinic’s pharmacy will obtain the medicine at a greatly reduced rate, making it affordable for patients, she said.

After the first year, Freeman can apply to the state to carry more patients. Eventually Johnson Health Center hopes to expand the service to all of its clinics.

“I don’t know that we have the capacity to meet the demands out there,” McCrickard said. “It’s really hard for us to determine how many patients need this treatment. I’m not under any illusion that we are going to solve this.”

In Nelson County, Martin said the money will provide residents with a licensed clinical social worker dedicated to patients with substance abuse and behavioral health issues. Blue Ridge Medical Center also will purchase a van and create a transportation service to help patients get to and from appointments. Staff will undergo extensive education and training on how to deliver trauma-informed care.

“We want everybody to know how to support people who are reaching out for help,” Martin said.

Rose is eager for the funding to arrive so her office can provide clients with more assistance.

Both Bedford and Nelson expect to grow their patient numbers with the additional services and said they have the staff to accommodate the growth.

“The people that we work with are not bad people; they are good people who have an addiction and addictions are very hard to overcome,” Turner said.

“With Johnsons adding their program, it just shows that the community, as a whole, cares,” Tuner said. “We’re all committed to this together to make the community better.”