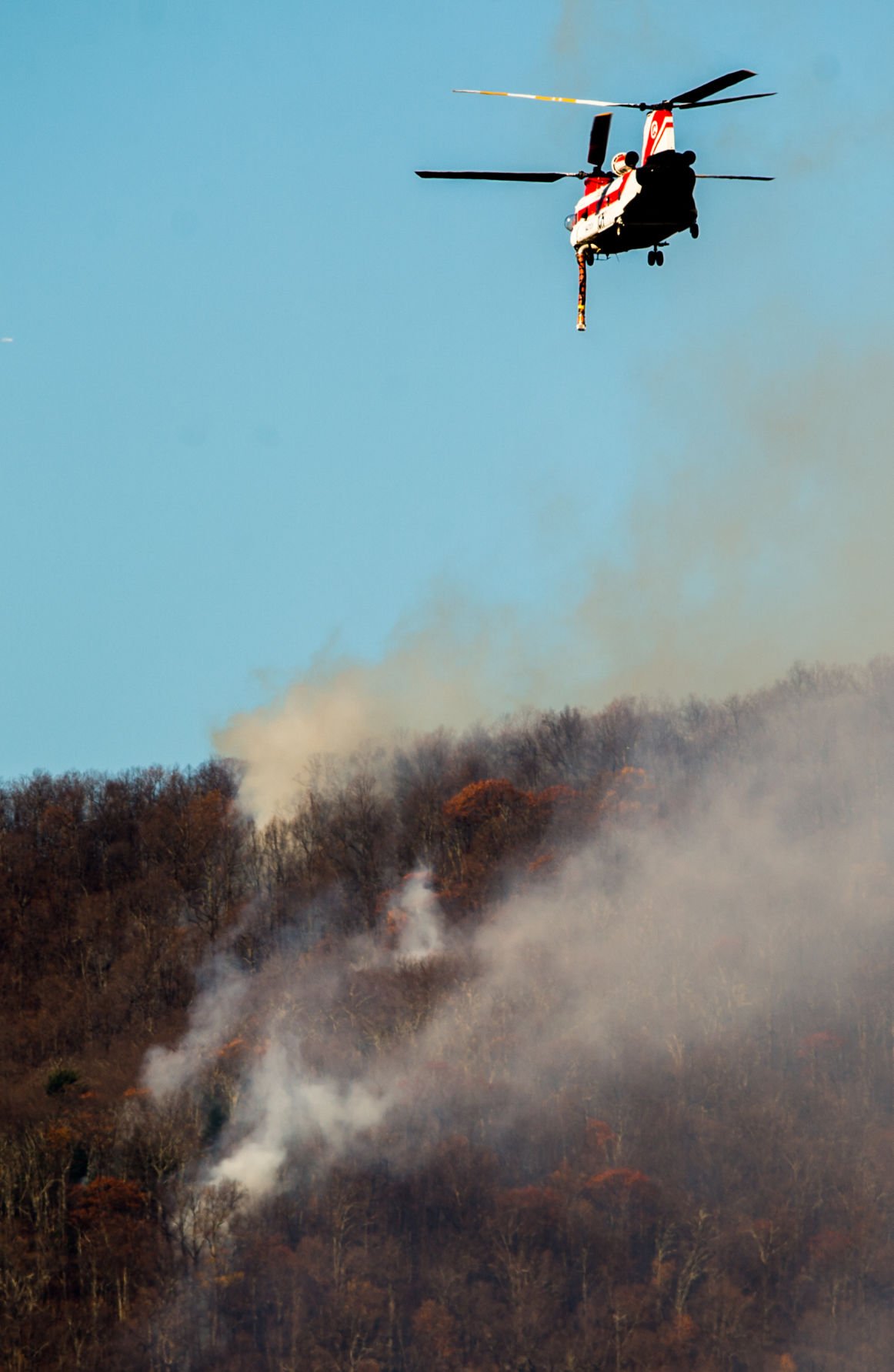 In this November 2016 file photo, a helicopter drops water on the wildfire that consumed more than 11,000 acres in northern Amherst County. Photo by Lee Luther Jr. 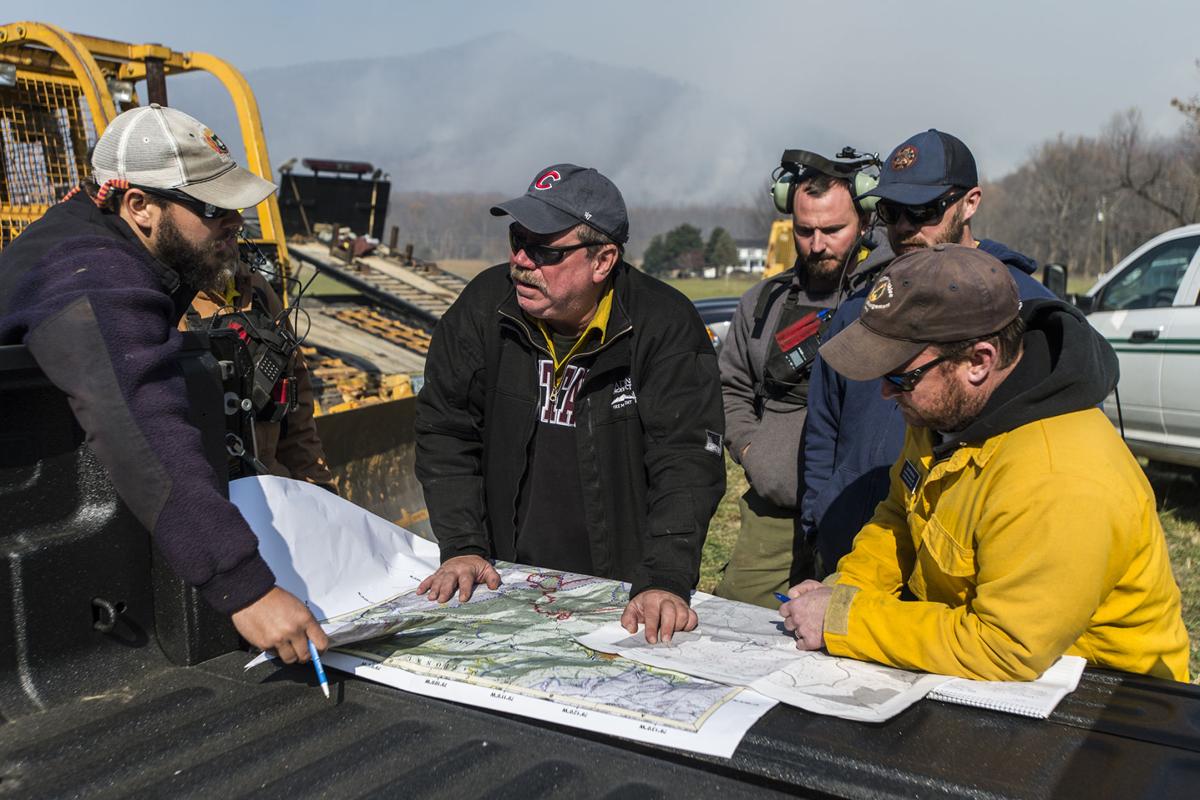 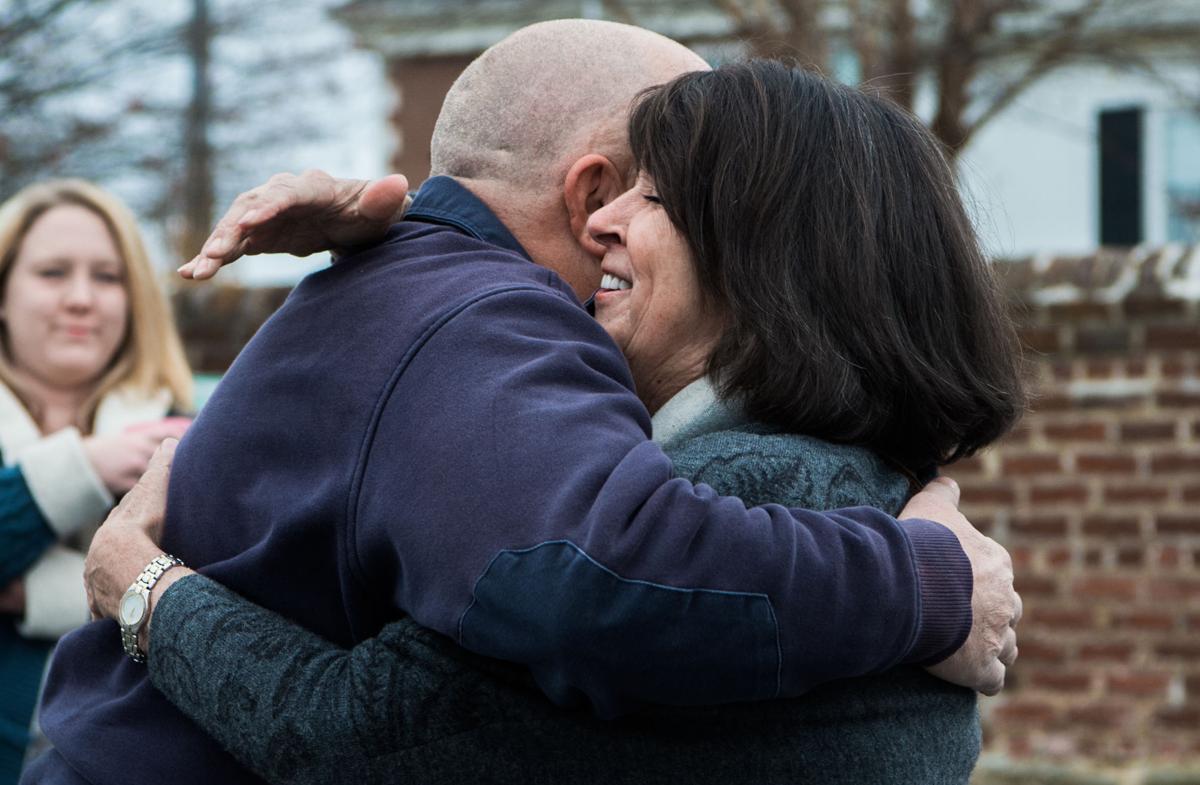 In this December 2016 file photo, Amherst County Public Safety Director Gary Roakes gets a hug from Christine Vrooman during a tribute to firefighters who responded to the Mount Pleasant wildfire, which Vrooman spearheaded in Amherst. (Photo by Lee Luther Jr.) 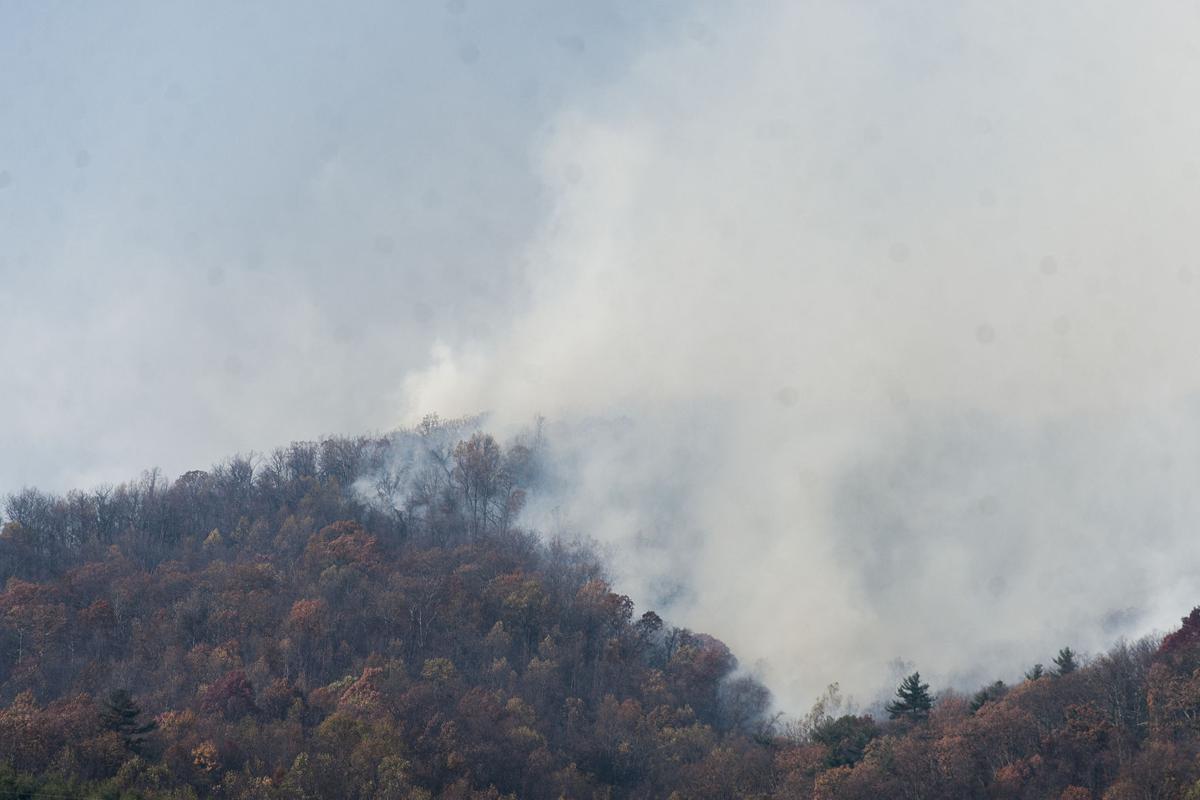 In this November 2016 file photo, a helicopter drops water on the wildfire that consumed more than 11,000 acres in northern Amherst County. Photo by Lee Luther Jr.

In this December 2016 file photo, Amherst County Public Safety Director Gary Roakes gets a hug from Christine Vrooman during a tribute to firefighters who responded to the Mount Pleasant wildfire, which Vrooman spearheaded in Amherst. (Photo by Lee Luther Jr.)

A year after a fire consumed more than 11,000 acres in the Mount Pleasant area of Amherst County, Christine Vrooman compared the incident to a movie where she and her family played unexpected roles.

Vrooman, owner of Ankida Ridge Vineyards, said it almost seems like the fire never really happened until she sees the charred scars at the base of nearby trees and occasionally smells creosote coming from the forest floor on damp fall days.

“That Saturday afternoon would be the beginning of several days of fear, anxiety, relief, exhaustion, gratitude and a new level of deep appreciation for the firefighters that saved our home and vineyard,” Vrooman said.

Her home and vineyard suffered little to no damage in the fire, Vrooman said, adding the vines were dormant at the time of the fire and all the fruit was off the vine. If the fruit had not been harvested when the fire occurred, the wine made with that harvest would have had a smoky taint to it and would have been difficult to sell, Vrooman said.

“The smoke was so thick for so many days,” Vrooman said. “My eyes burned inside the house.”

Because of the fire, she could not host family for Thanksgiving, sending everyone to Charlottesville for the holiday meal. Vrooman said by that evening the smoke had drifted in another direction and she and her family were able to host a Thanksgiving meal for the firefighting teams from Alaska and West Virginia.

“What an honor for us to feed these heroes,” Vrooman said. “We, along with the entire Amherst community, felt we could not do enough for them to show our deepest appreciation for their heroic efforts.”

In early December 2016 Vrooman organized a tribute ceremony in the town of Amherst to thank the firefighters who helped combat the blaze.

At that time Vrooman recalled taking turns with family members to stay awake and monitor their property.

The fire helped Vrooman experience the value and importance of “stuff,” she said, recalling first arriving to the house, not knowing how much time they had and realizing what is truly important.

“Leaving the house with just our dog and an armful of things important enough to grab, I realized how unimportant most of the ‘stuff’ is that we fill our lives and homes,” Vrooman said.

Vrooman said another thing she took away from the experience last year was being “firewise,” preparing the home’s surroundings to be clear of leaf debris, not stacking firewood next to the house and more.

“These were thoughts that never entered our minds until this event,” Vrooman said. “…We will be forever grateful to our firefighters, local, state and federal. They are truly heroes.”

Amherst County Director of Public Safety Gary Roakes said the fire last year was probably the largest he has seen since he began working for the county 13 years ago.

Roakes said he has been back up in some of the areas the fire came through and it’s starting to green up again.

“You can still see some areas where the [burn was] but even back in the spring it was greening up …,” Roakes said.

Last year the fire mostly crept along the ground, Roakes said, with flames a foot high in some spots.

“Basically, all it did was come through and clean the floor of the forest and cleaned the underbrush and stuff like that,” Roakes said. “In some of these areas the U.S. Forest Service already had prescribed burns anyway … it just happened to do it for them.”

Concerning fire safety, Roakes said one measure, whether with camping or yard work, is completely covering the fire with dirt or water to extinguish the flames, making sure to have a rock barrier surrounding the fire and not burning in the middle of the woods. Roakes also said not to burn on windy days and to have a hose and/or rake available to help prevent the fire from spreading.

“Be careful when you’re burning, be aware of your surroundings, don’t burn near the woods,” Roakes said. “…Be cautious with it, respect the fire.”

The U.S. Forest Service issued a $2,000 reward in June 2017 for tips which could lead to the arrest of the person or persons responsible for starting the massive wildfire.

Stull said last week the reward still is active and the case remains under investigation.

“The outstanding cooperative effort of many partners including the U.S. Forest Service, the Virginia Department of Forestry and the Amherst County Public Safety was identified as one of the successes last fall,” Stull said. “Also, the community’s overwhelming support and care for the many firefighters from across the country will not be forgotten any time soon.”

From the archives: November wildfires in Amherst and Nelson counties, three years ago

Three years ago, a wildfire in Amherst County consumed more than 11,000 acres in the George Washington National Forest and on private land. Sm…