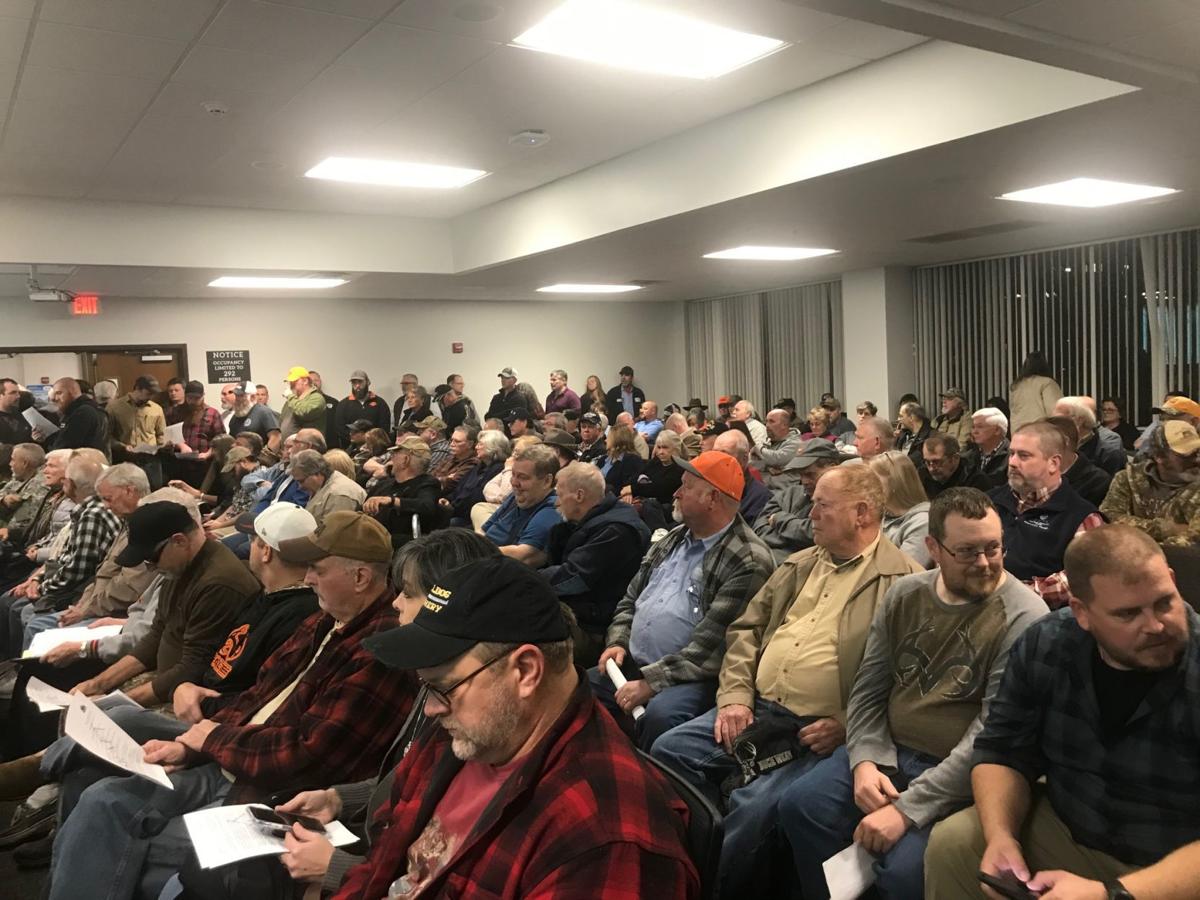 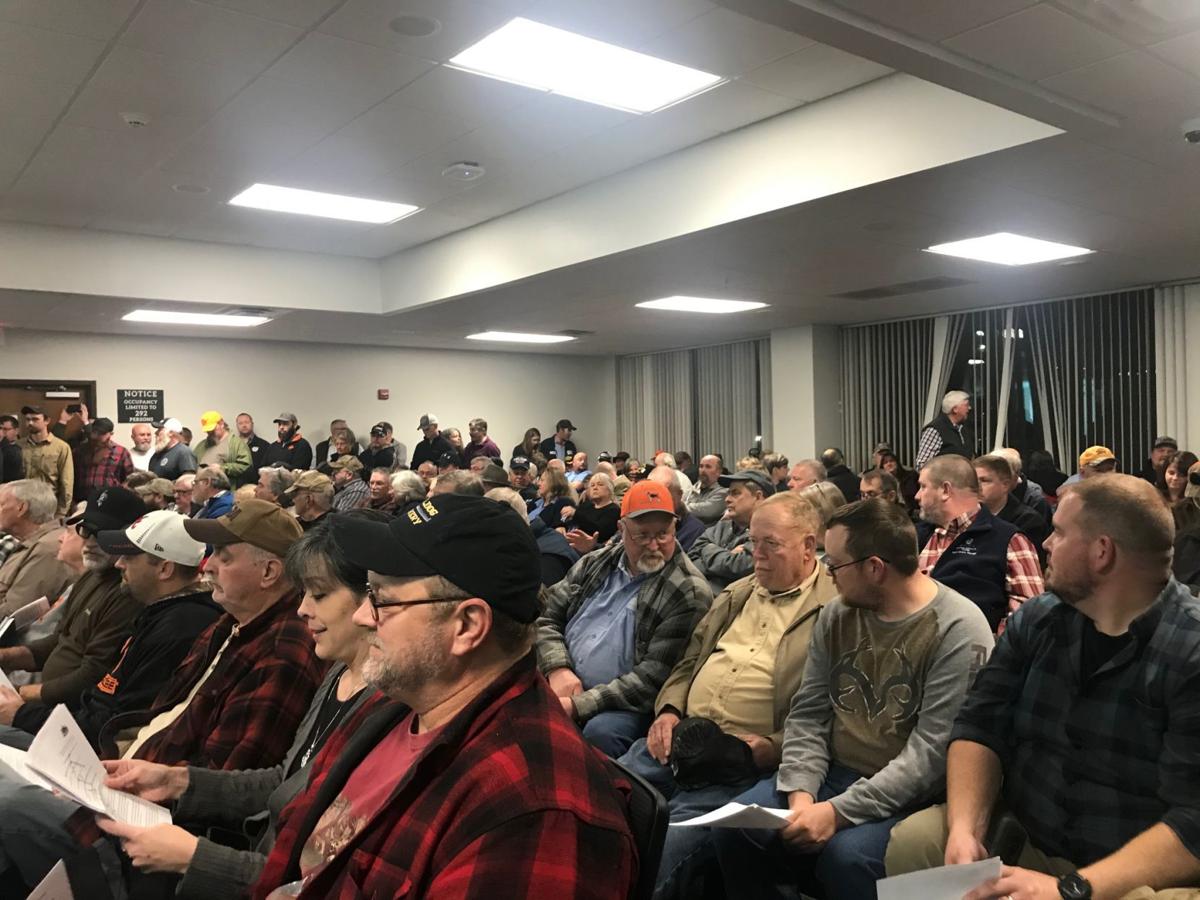 A large crowd packs the Amherst County Board of Supervisors meeting on Nov. 19 in support of the board declaring the county a Second Amendment Sanctuary county.

A large crowd packs the Amherst County Board of Supervisors meeting on Nov. 19 in support of the board declaring the county a Second Amendment Sanctuary county.

AMHERST — A few hundred people swarmed Amherst County’s government headquarters Tuesday to blitz county officials with their passionate support of a measure to make the county a “Second Amendment sanctuary” county, a hot topic among some Virginia counties following the Nov. 5 election.

The declaration is largely symbolic as county leaders strive to ensure “the rights of law-abiding citizens to keep and bear arms for the purpose of lawful self-defense, community defense, and hunting, as protected by the United States and Virginia Constitutions” be protected and celebrated, according to a draft resolution before the Amherst County Board of Supervisors on Tuesday.

Supervisors took public comments on the matter during Tuesday’s meeting, where there were cries of gun rights being under siege by Gov. Ralph Northam and Democratic legislators who gained a majority in the state legislature after the election. Amherst residents who overflowed the board’s meeting said they fear Democratic lawmakers will infringe upon their Second Amendment rights. The crowd spilled out of the meeting room and into the parking lot with residents in support of the sanctuary measure to protect those rights from any state or federal legislation that would infringe upon them. All who crammed into the standing-room-only meeting stood and raised their hands when chairman Jimmy Ayers asked if they support the gun rights measure.

Amherst was one of three Virginia localities taking up the issue Tuesday night alone. By the end of the night, Pittsylvania County had joined Carroll, Campbell, and Appomattox counties in passing resolutions to protect residents' Second Amendment rights.

Amherst’s board did not pass the resolution declaring Amherst a Second Amendment sanctuary Tuesday in the interests of making sure the language is right and, according to Ayers, has as much “teeth” as possible. Supervisors said they want more review by the county’s attorney and would take it back up at a Dec. 3 meeting.

The draft resolution urges state and federal lawmakers and agencies not to adopt, accept or enact any regulation that would infringe on the constitutional right to bear arms and said the board is concerned certain legislation planned for introduction in the 2020 General Assembly session and certain legislation introduced in the U.S. Congress “may have the effect of infringing on the rights of law-abiding citizens to bear arms.”

Steve Martin, an Amherst business owner, said it would be a “shame and a disgrace” to not preserve the gun rights county residents’ ancestors have enjoyed. Bennie Woody Jr., a county resident, said he is bothered by any state measure that would prevent children from hunting and taking it away would be unfair.

“I read somewhere the quickest way to overthrow a country is to disarm citizens, and that’s what we’re seeing,” Woody said, drawing applause.

Vance Wilkins, chairman of the Amherst County Republican Committee and a former Virginia Speaker of the House, urged the board to join other localities in the sanctuary passage.

“We have a wonderful second amendment climate in Virginia today,” Wilkins said.

He said that climate is under threat when the General Assembly receives a Democratic majority next year and laws could change affecting counties from Amherst to Washington, D.C.

Democrats already have filed several gun control bills ahead of the January legislative session. Proposals include universal background checks, civil penalties for not reporting lost or stolen firearms to police, reinstating the state’s lapsed one-handgun-a-month law, and giving localities the ability to prohibit the carrying of firearms in a public space during an event that would require a permit.

Michael Bryant, of Madison Heights, said he was glad to see such rampant support among gatherers and added the measure shouldn’t even be needed, blasting lawmakers who lean toward passing strict gun control measures.

“We’re not going to stand for them taking away our rights,” Bryant said. “We shouldn’t have to come here and beg for our rights.”

Gloria Witt, a leader in Amherst County’s NAACP chapter, said gun control is not about taking away citizens’ rights but is aimed at making it harder to acquire certain weapons that are prevalent in a rise of shootings across the country.

She favors gun control legislation that would make it more difficult for certain weapons to be purchased.

“It’s very interesting the energy around this topic,” Witt said of the massive turnout.

Witt said she doesn’t want to fear going out in public and getting shot and she favors legislation that aims to curb the violence.

“It’s not about taking your guns,” Witt said.

Sandi Esposito, a historian in Amherst, quoted Patrick Henry as saying “You take away the guns, the people are going to rise up” and that is what is happening across Virginia, adding guns are “what we need to protect ourselves from the government.”

Philip Van Cleave, of the guns rights group Virginia Citizens Defense League, said Northam’s end goal is disarmament of citizens and he is hopeful for a tsunami of opposition such as what was shown in Amherst. He and other speakers said if the Second Amendment is infringed upon other constitutional rights would be also. Members of the league showed up at several Second Amendment sanctuary meetings in Virginia Tuesday to support the movement.

“If we lose that, it’s all going to go,” Van Cleave said.

Ayers, a former Amherst County sheriff, thanked the crowd for its strong show of support and assured residents the board would act to protect gun rights. Sheriff E.W. Viar, who did not attend the meeting, said at an Oct. 23 community forum prior to his recent reelection he fully supports Second Amendment rights of citizens.

Ayers said he feels stricter gun laws are not going to change the pattern of violence, and if a person wants to commit a crime bad enough, he or she will find a way to get that gun.

“Infringement on our Second Amendment rights only impacts the citizens who are here,” Ayers said.

“Just give them the right subject, they will get involved,” Tucker said of residents’ engaging in the public process.

Franklin County supervisors have directed staff to draw up a resolution regarding gun rights but have not passed such a resolution. That information was incorrect in an earlier version of this story.

CHATHAM — Joshua Jennings, who runs a gun store in Cascade, is nervous about the prospect of additional gun regulation that has been proposed …

Disregarding people based on how they look, how very Democrat of you.