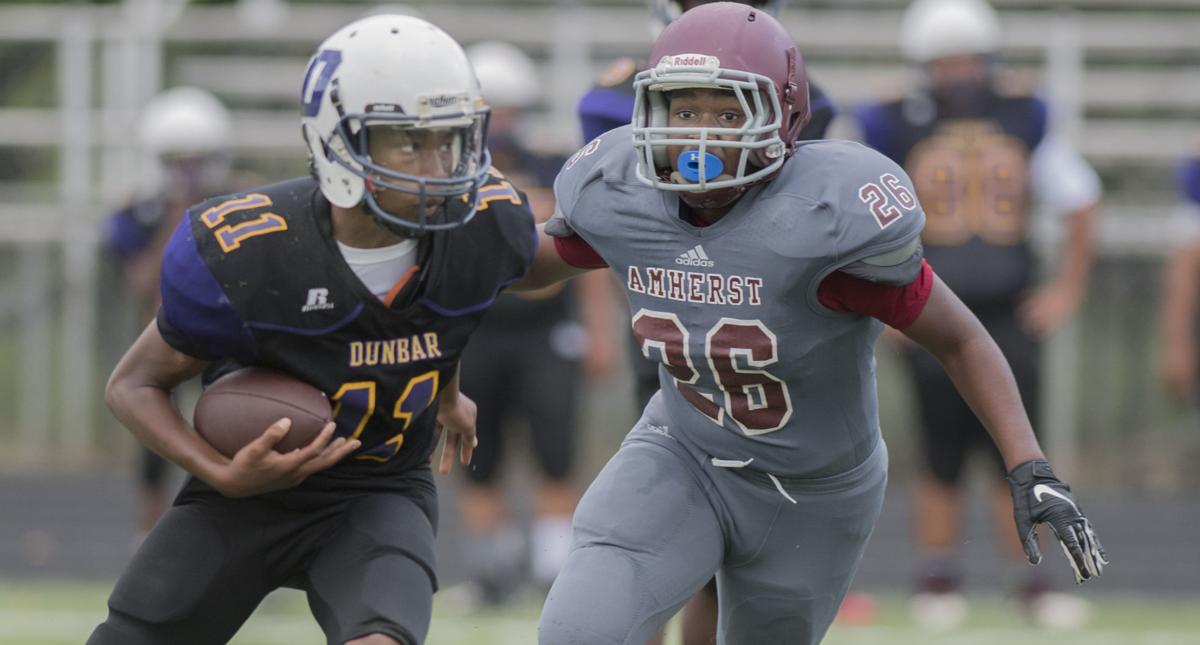 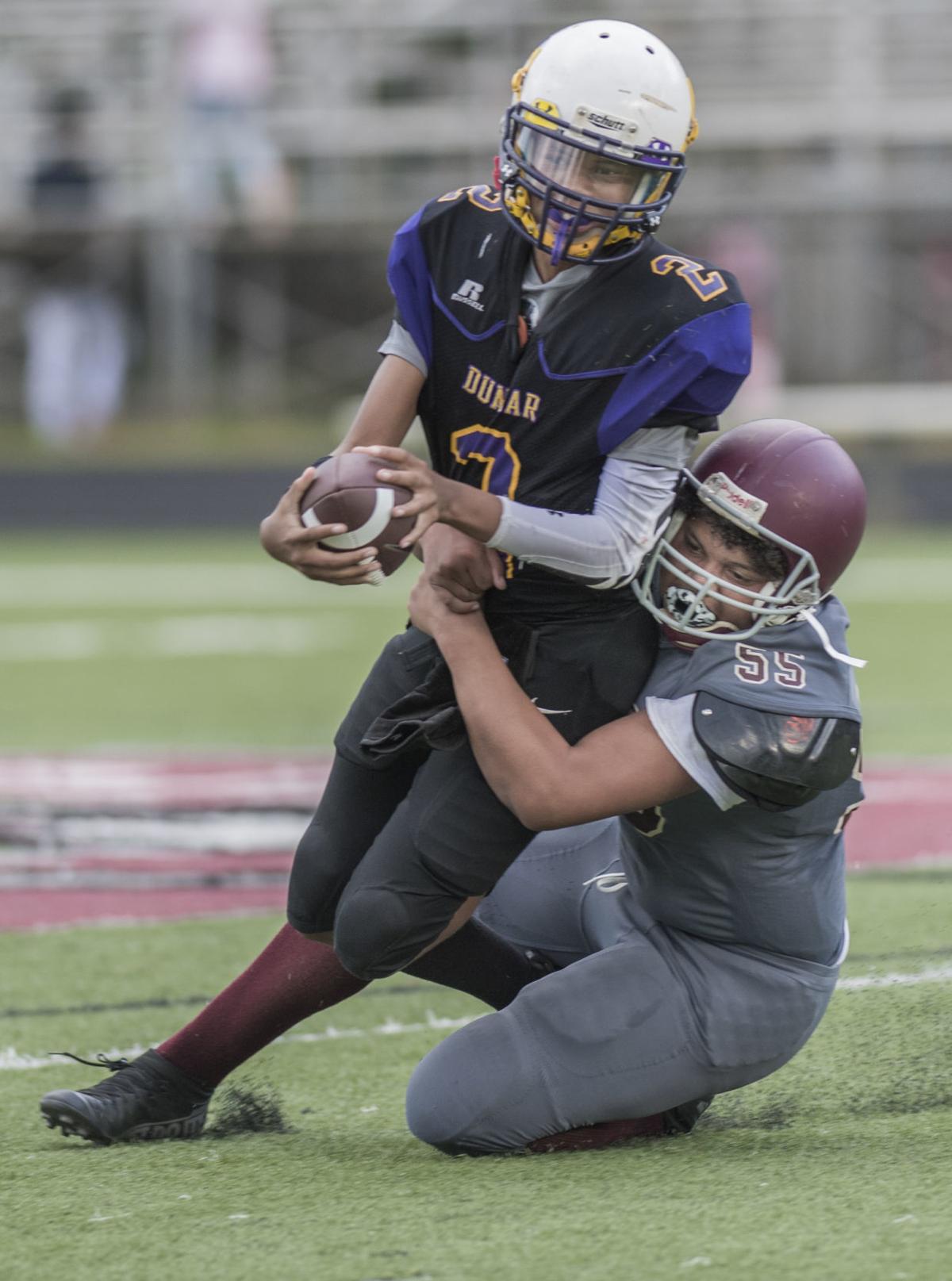 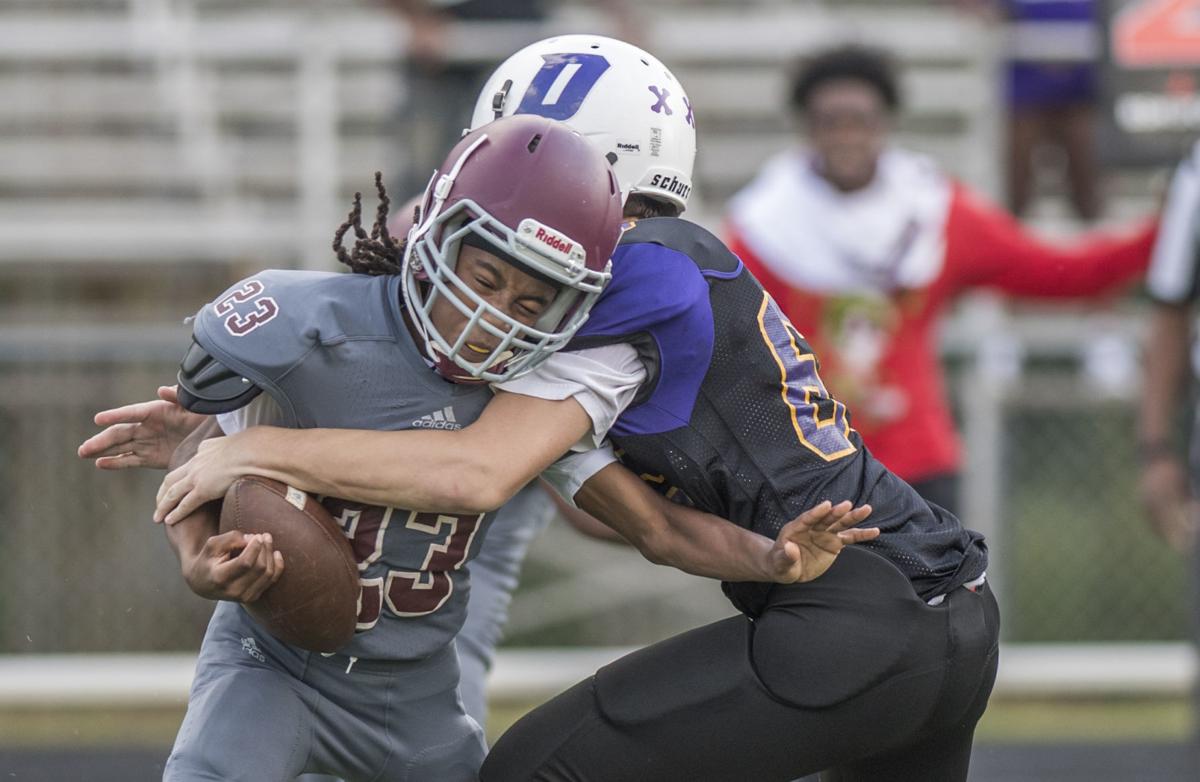 Amherst B team running back Jor'dyn Whitelaw takes a hit from a Dunbar defender last week.

Amherst's Omar Brown out leaps the Dunbar intended receiver for an interception for his Amherst B team last week.

Amherst B team running back Jor'dyn Whitelaw takes a hit from a Dunbar defender last week.

Amherst's Omar Brown out leaps the Dunbar intended receiver for an interception for his Amherst B team last week.

The Amherst B Team is off to a 2-0 start after securing wins against Rustburg and Dunbar middle school.

The team, comprised of players from Monelison and Amherst middle schools following a merger a few years ago, rolled over Rustburg, 37-0, and took care of Dunbar, 14-0, last week on Lancer turf.

The team is coached by Alex Dodgion, who is using the two quarterback rotation system with players Johnathan Goins and Jaizeon Hurt.

“Johnathan was our starting quarterback last season. He is a born leader both on and off of the field and never takes a play off,” Dodgion said. “Jaizeon is our utility player who can play any position that we put him in. He plays quarterback, running back and wide receiver and on offense as well as starting outside linebacker on defense.”

Dodgion said his team is learning a new offense.

“With us learning a new offense this season there have been a few growing pains, but the kids are some of the hardest workers that we have coached and continue to improve each day,” said Dodgion.

On defense, Omar Brown is a leading tackler from the cornerback position.

“Omar flies to the football and one of our best tacklers,” said Dodgion. “Omar already has two interceptions this season.”

Dodgion said the defense is making it hard for the opponents to run the ball.

“Teams have struggled running the ball against us this season due to the outstanding play by our defensive tackles Caylab Ramsey and Jadan McQueen and our inside linebackers Johnathan Goins and Jalen Turner,” he said.

Dodgion has a positive outlook on the rest of the season.

“We still have a tough schedule ahead of us but as long as each player does his job, I see us being very successful the rest of the way,” said Dodgion. “Amherst County football has a very bright future ahead with this group of young men.”