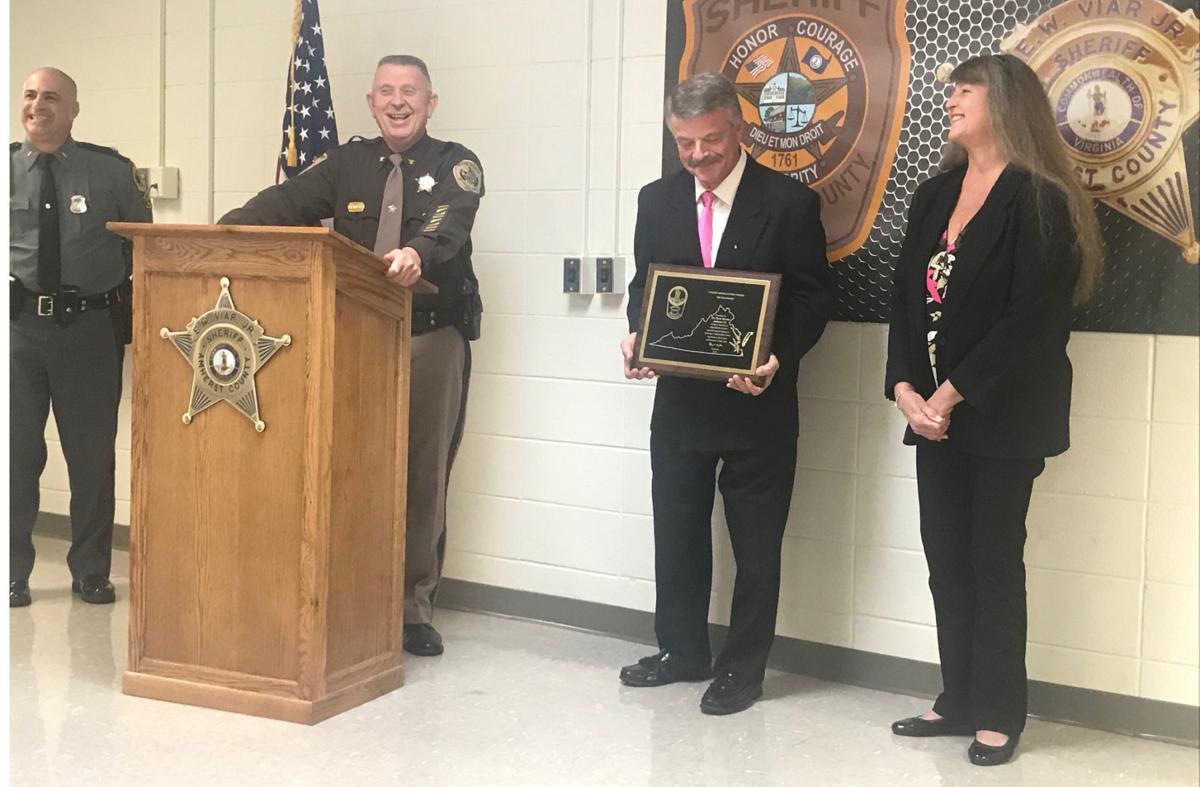 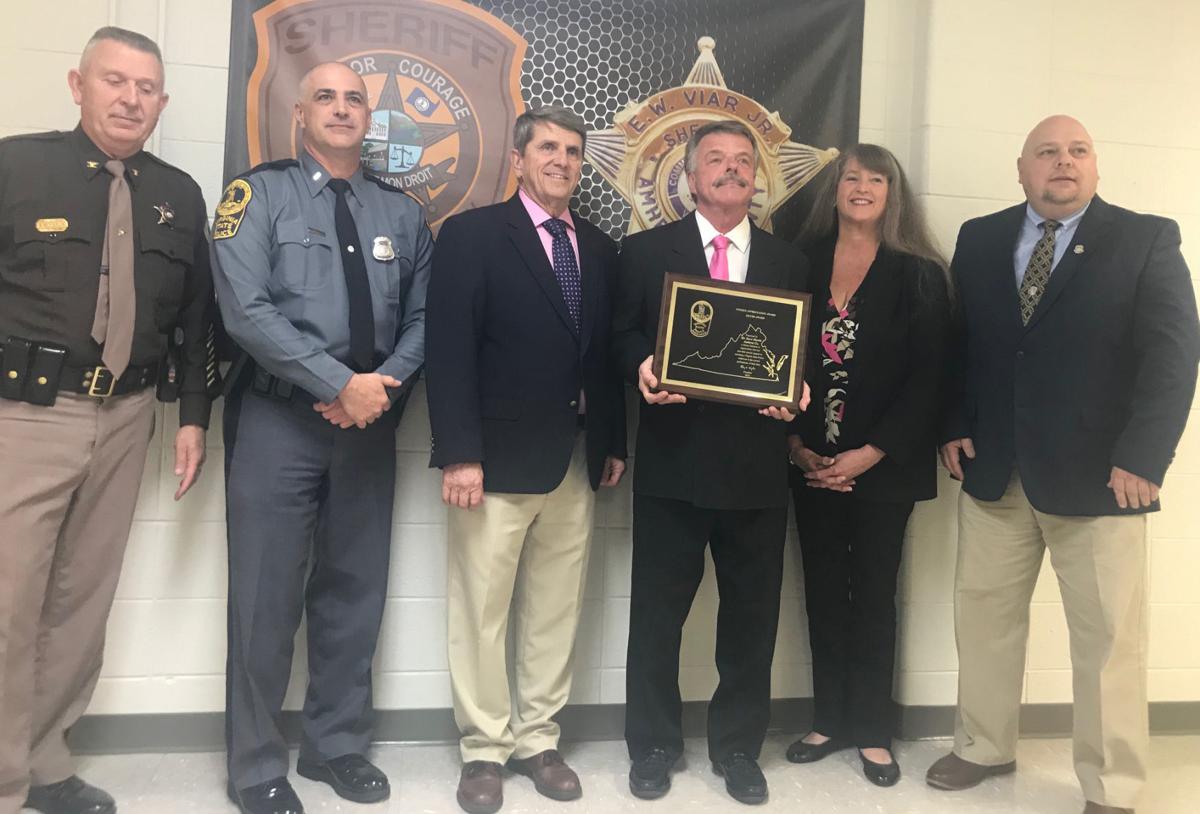 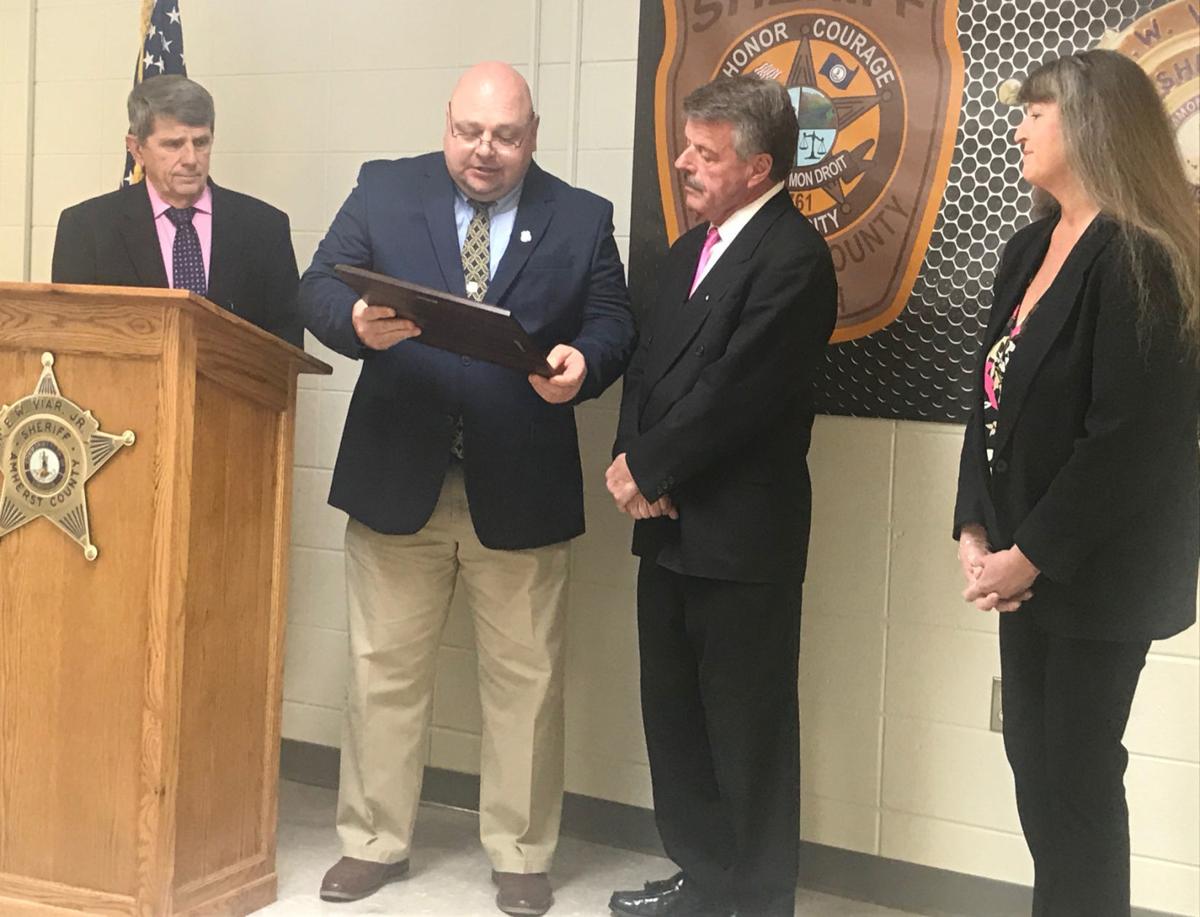 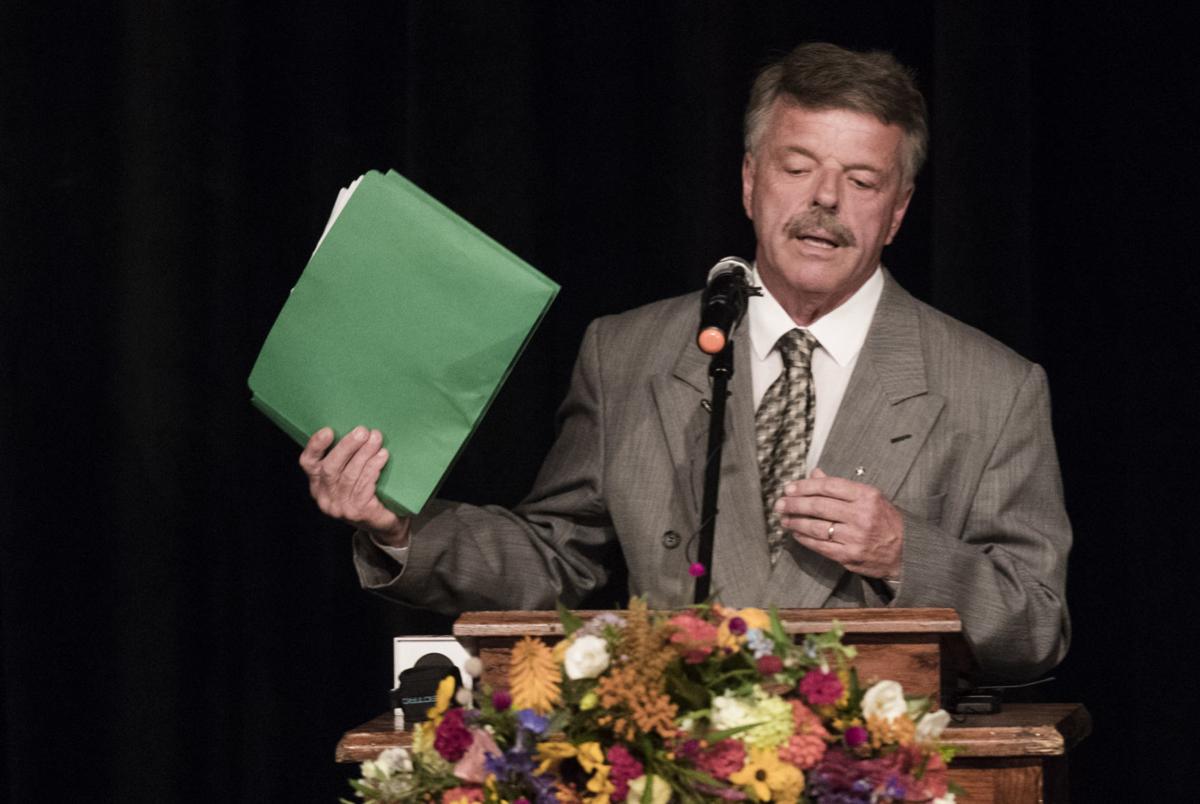 Steve Martin holds more than 2,000 signatures he collected to have a bridge over the U.S. 29 bypass named in honor of Trooper Lucas B. Dowell during an Aug. 2 ceremony at Amherst County High School. 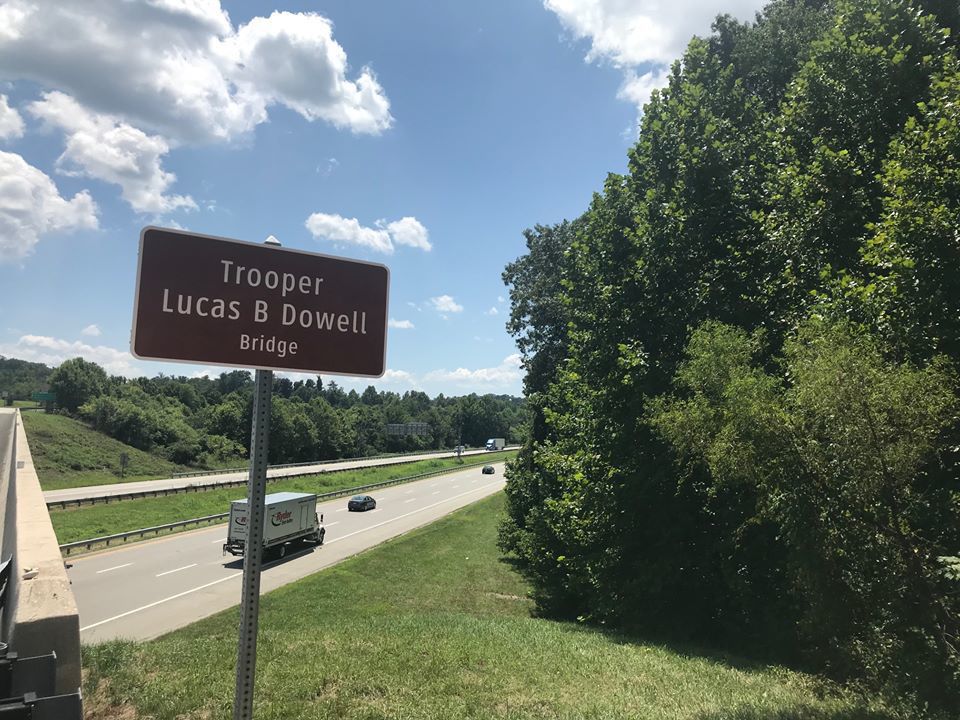 The Tooper Lucas B. Dowell Bridge sign is seen here on Aug. 3, 2019, the week it was unveiled and dedicated in Amherst. 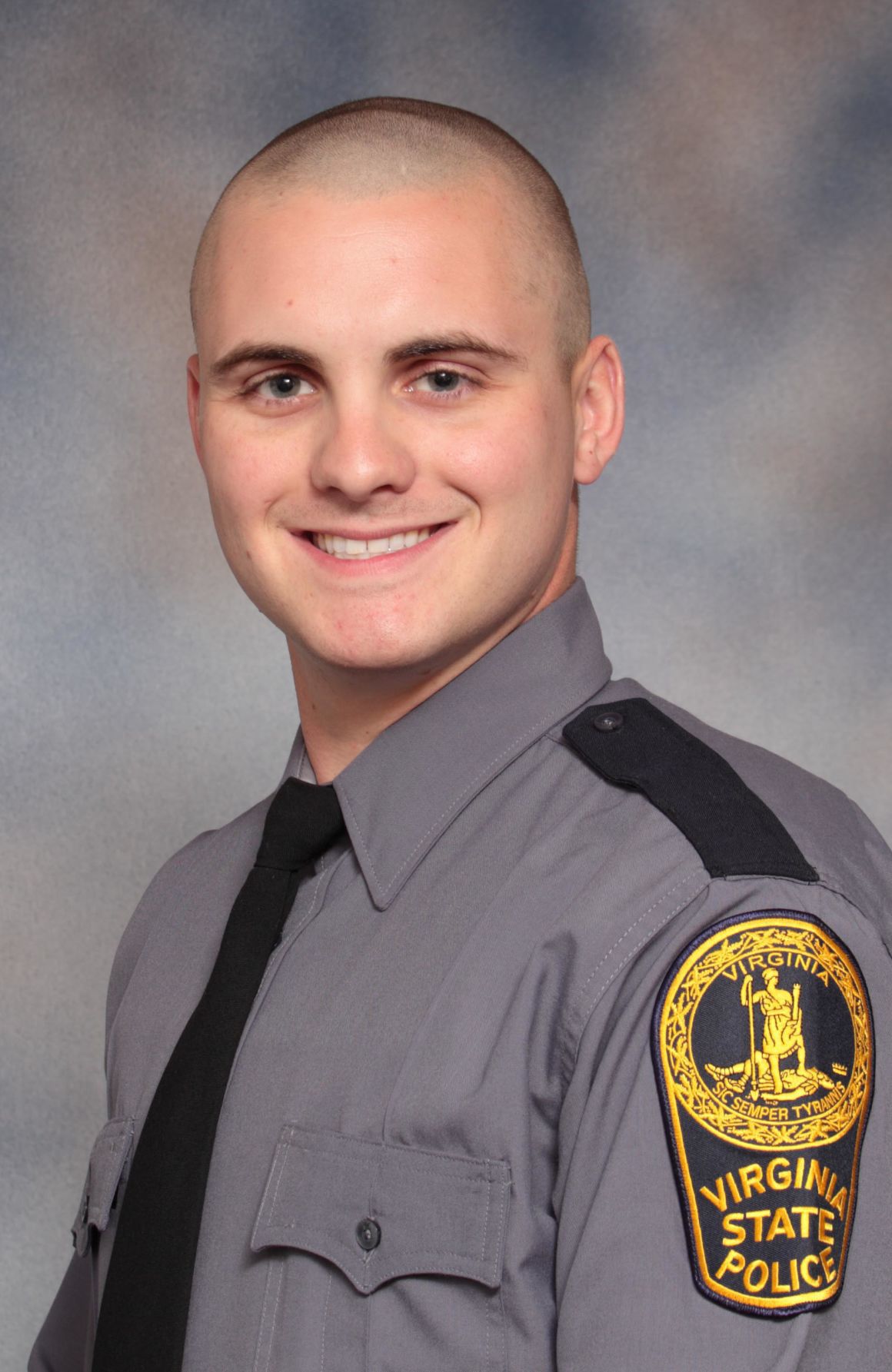 Steve Martin holds more than 2,000 signatures he collected to have a bridge over the U.S. 29 bypass named in honor of Trooper Lucas B. Dowell during an Aug. 2 ceremony at Amherst County High School.

The Tooper Lucas B. Dowell Bridge sign is seen here on Aug. 3, 2019, the week it was unveiled and dedicated in Amherst.

The citizen appreciation award is bestowed upon a resident, organization or business who has provided special support in assisting a Virginia State Police employee in the normal performance of their duty. Ronnie Miller, a member of the Virginia State Police Association’s board, and Del. Ronnie Campbell, R-Rockbridge, honored Martin with the award during a brief presentation at the Amherst County Sheriff’s Office.

Martin said he knew Dowell, who he recalls always had a sweet smile and twinkle in his blue eyes, while serving the state police’s Area 20 office in close proximity to his business, Martin’s Paint & Body Shop in Amherst. Dowell was killed Feb. 4 while serving in the line of duty in Cumberland County.

“He was such a nice, sweet young man,” Martin said at an Aug. 2 ceremony to dedicate a bridge over the U.S. 29 bypass in Amherst in Dowell’s memory.

Martin played a pivotal role in the bridge’s dedication that day. He led the campaign to establish the “Trooper Lucas B. Dowell Bridge” and gathered 2,194 signatures for the petition that went before local and state officials.

Martin said he wants students at Amherst County High School and residents, when they cross the bridge, to always remember Dowell and how he gave his life in service to others. Dowell, 28, a native of Chilhowie, was killed while executing a search warrant on a home just north of Farmville as part of a state police tactical team assisting the Piedmont Regional Drug and Gang Task Force.

Campbell, a retired state trooper who previously served on the association’s board, said Martin’s actions to honor Dowell prompted him to nominate Martin for the Silver Award, which the association board recently approved. He praised Martin for his community service and aiding law enforcement in a variety of ways.

“He’s a very dedicated public servant in his own right,” Campbell said.

Miller said he knew Dowell’s family in Chilhowie and was pleased to take part in presenting Martin with the honor.

Martin, accompanied by his wife, Jerry, said he didn’t feel deserving and thanked every resident who signed the petition. “I pray every day for the policemen here in the county to stay safe and return home safely,” he said.

Amherst Sheriff E.W. Viar praised Martin as a civic servant in Amherst. “He is always there for law enforcement, EMS and fire people and we’re very fortunate to have him in our county,” Viar said.

Lt. David Edwards, of the state police’s Appomattox division headquarters, said he worked with Dowell in the Amherst office and also regularly encountered Martin in the course of his duties. Edwards said there is no person more deserving of the recognition than Martin for how he has helped local and state law enforcement.