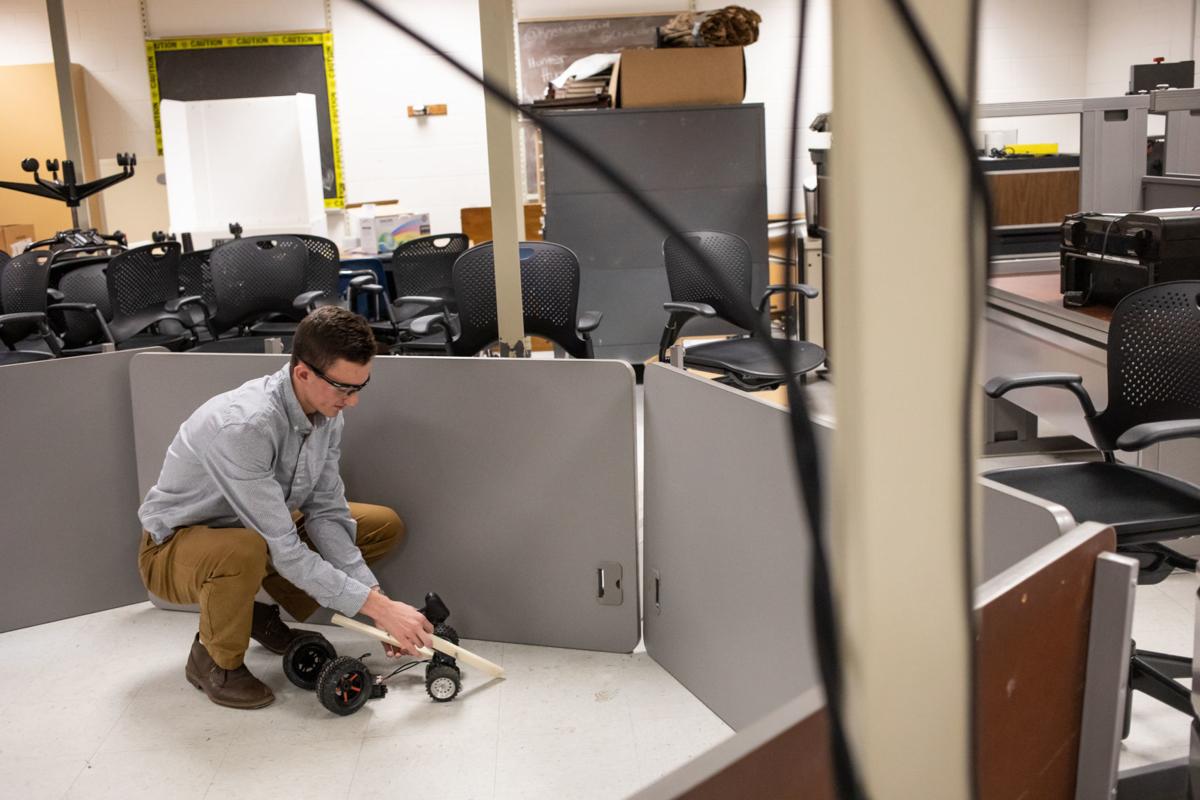 Senior Sam Gowdy steps into the ring to retrieve pieces left of "The Junkyard Bot” after the tournament on Friday, Jan. 24, 2020 at Amherst County High School. 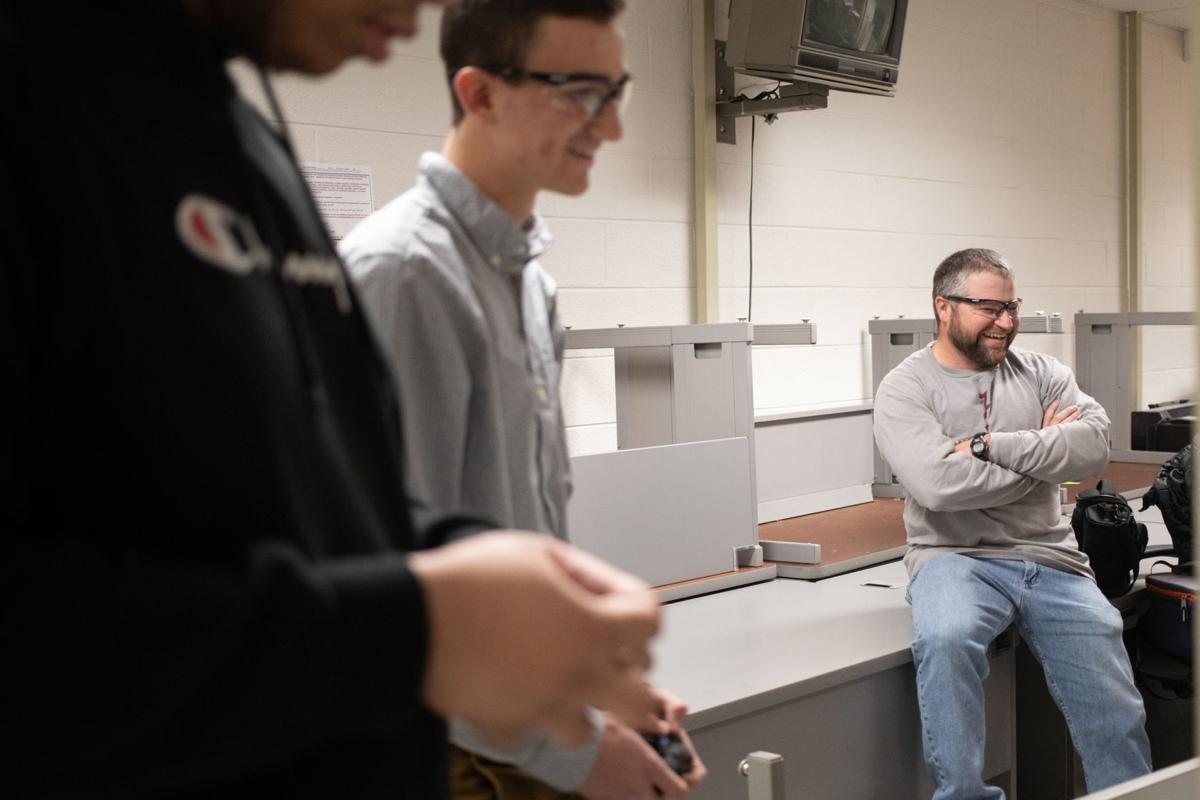 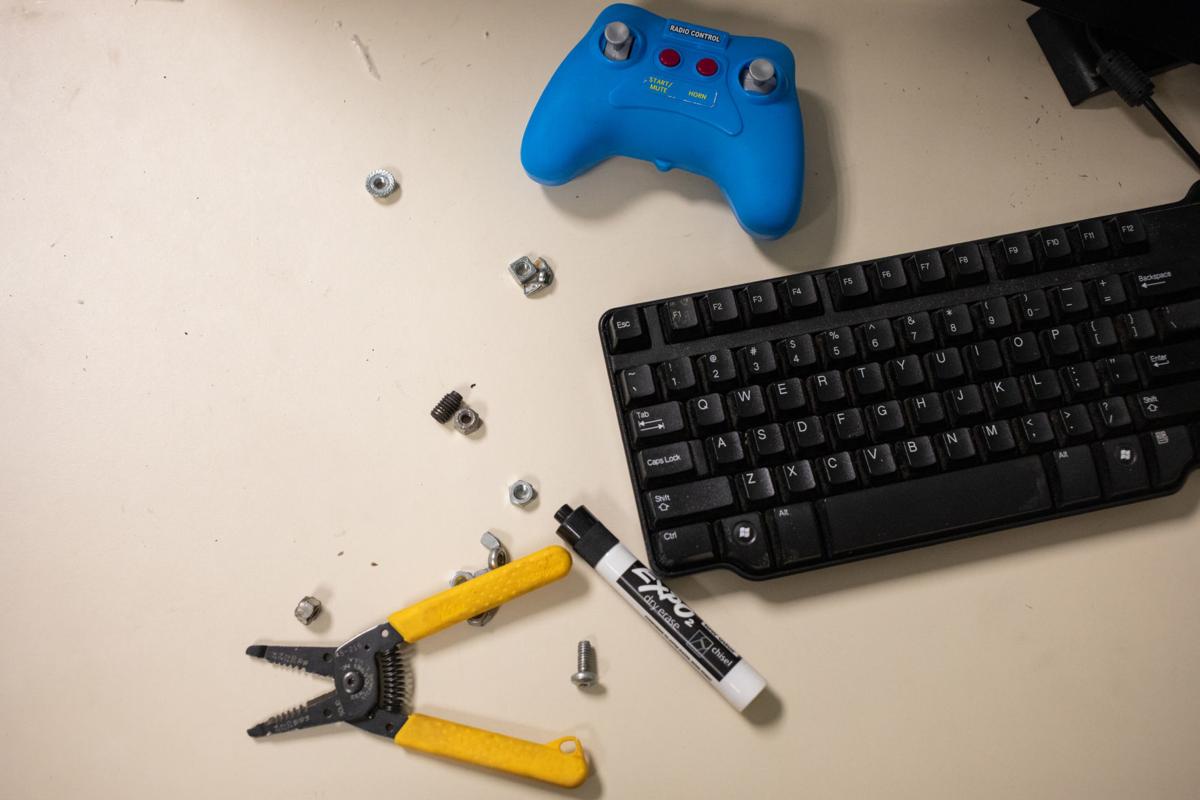 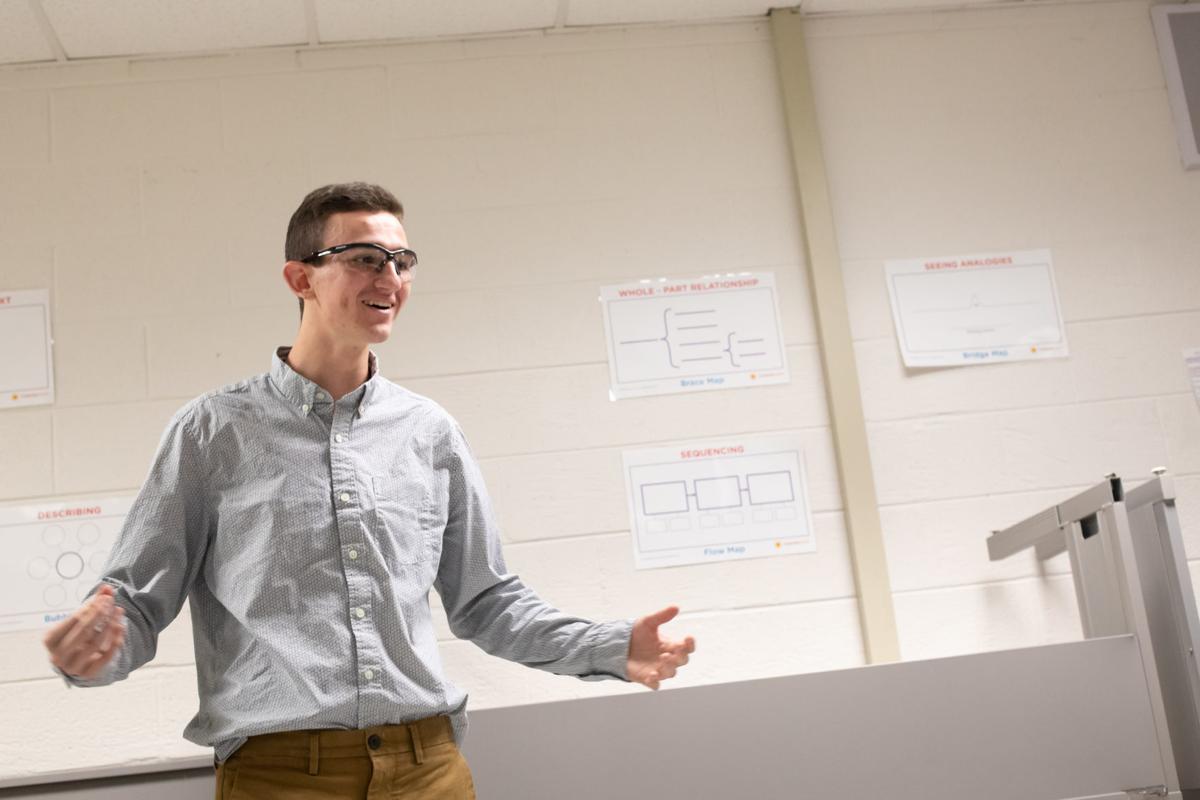 Senior Sam Gowdy smiles after "The junkyard Bot" is declared winner in a tournament on Friday, Jan. 24, 2020 at Amherst County High School. 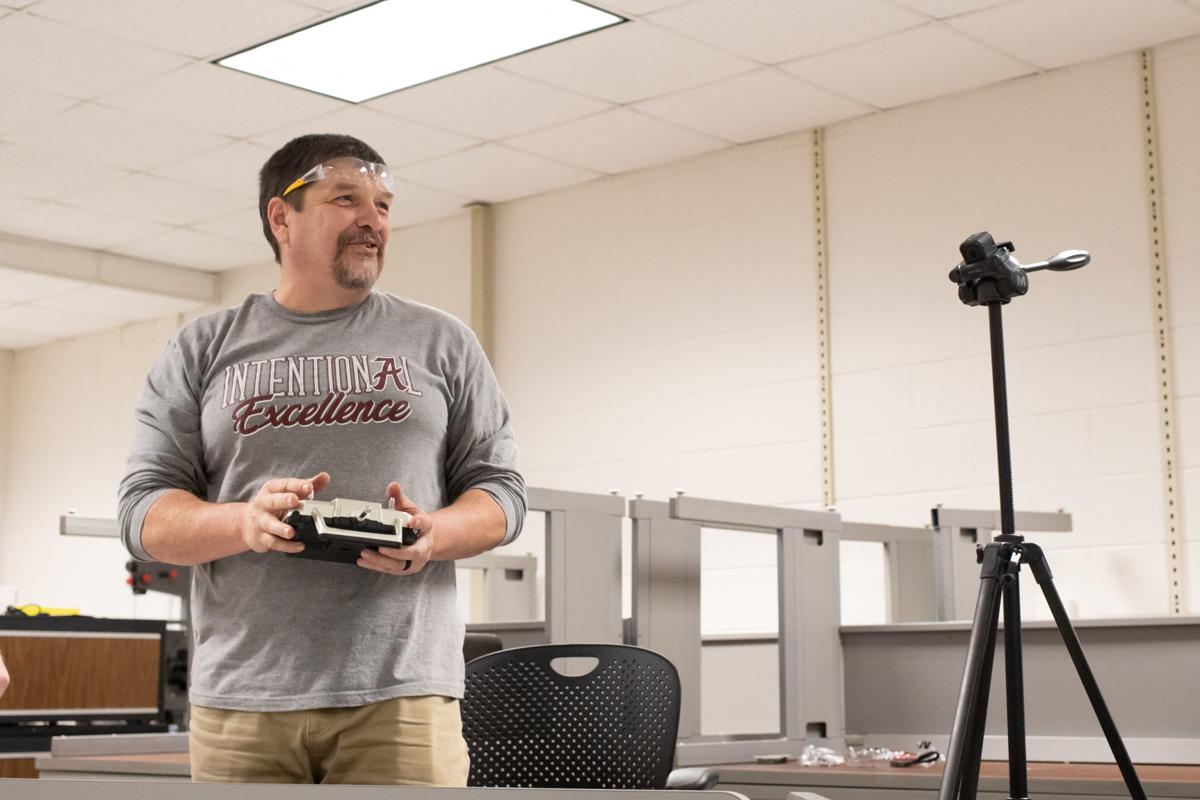 Advanced engineering drawing instructor John Moats smiles as he talks with students and faculty during a BattleBot tournament on Friday, Jan. 24, 2020 at Amherst County High School. 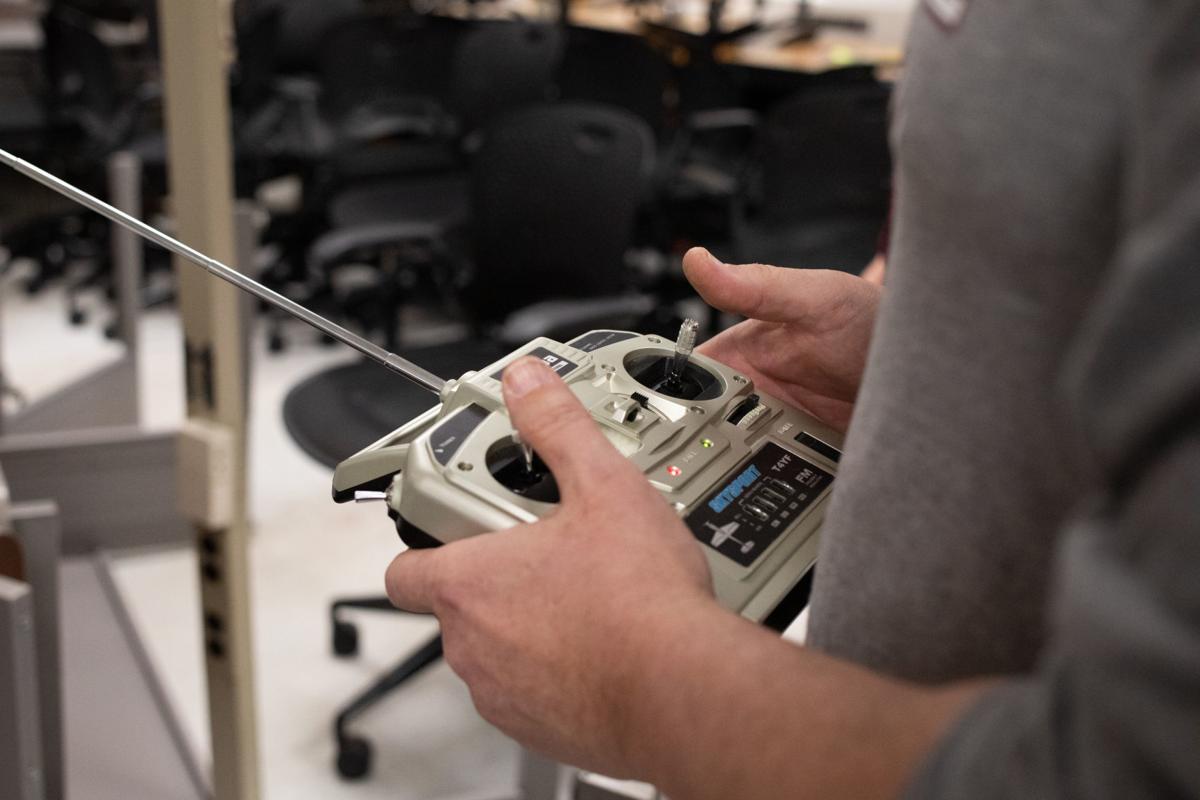 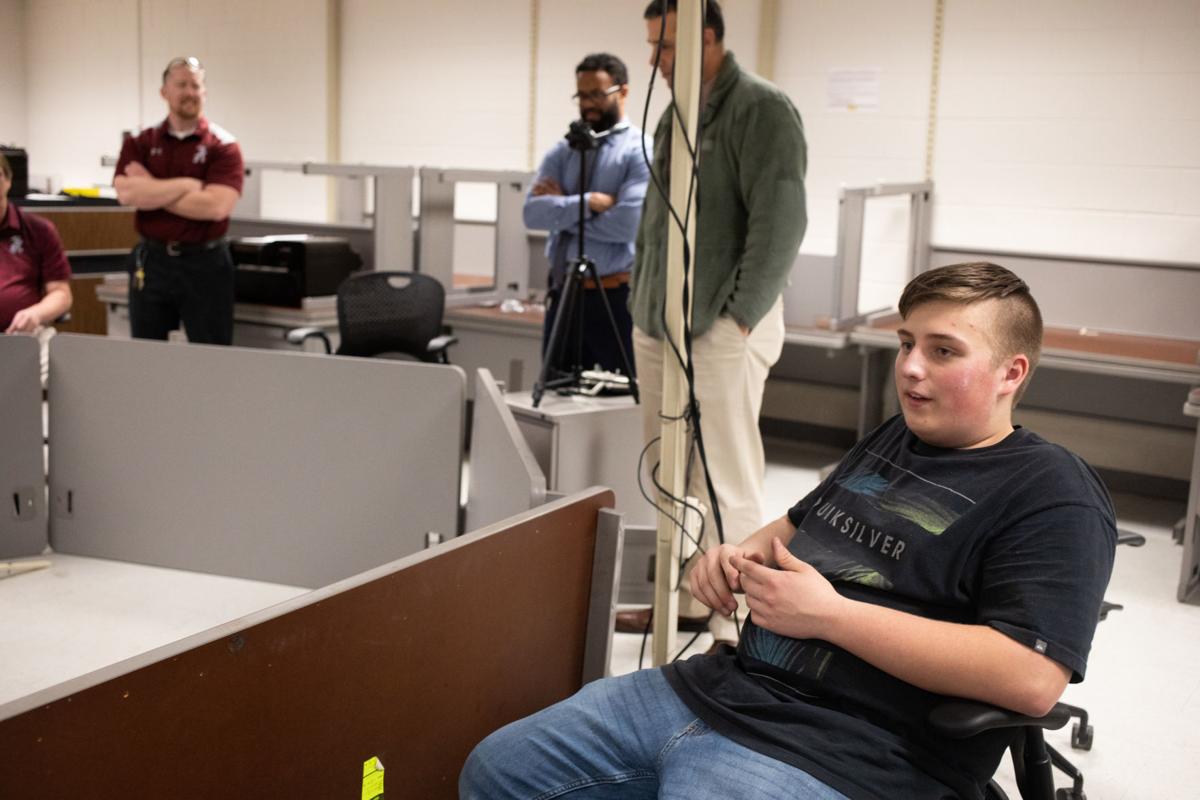 Senior Sam Gowdy steps into the ring to retrieve pieces left of "The Junkyard Bot” after the tournament on Friday, Jan. 24, 2020 at Amherst County High School.

Senior Sam Gowdy smiles after "The junkyard Bot" is declared winner in a tournament on Friday, Jan. 24, 2020 at Amherst County High School.

Advanced engineering drawing instructor John Moats smiles as he talks with students and faculty during a BattleBot tournament on Friday, Jan. 24, 2020 at Amherst County High School.

In a makeshift octagon of tables at Amherst County High School last Friday afternoon, the moment, weeks in the making, had arrived for a fight to the finish.

By remote control, seniors Aaron Elliott and Sam Gowdy ushered their handcrafted miniature vehicle into the mini-arena to square off against junior Austin Jerose’s machine.

The school’s inaugural BattleBot Tournament was about to begin.

“Can you imagine the bragging rights?” Elliott said while prepping his and Gowdy’s machine prior to the bout.

Elliot and Gowdy’s robot “The Junkyard Bot” emerged victorious Friday after repeatedly ramming Jerose’s robot, which had trouble starting. Instructor John Moats’ own creation, ‘The Ankle Biter,’ awaited the winner for another round of ramming the vehicles together until one could not continue.

“That was really, really fun,” Elliott said at the conclusion, pleased with their robot’s performance. “It did better than I thought it was going to do.”

Gowdy was satisfied with the durability of the duo’s invention.

“We thought it was going to fall apart after the first hits,” Gowdy said.

Though the tournament lasted just a few minutes, the three students put in about six weeks of work creating the robots from scratch as part of the school’s advanced engineering drawing course, which Moats said is in its third year at ACHS.

Moats said the course gives students a hands-on approach to engineering and design concepts. The students designed prototypes on the computer, drafted preliminary sketches and built their battery-operated inventions with wheels and weapons.

The idea came from “BattleBots,” a robot combat television series in which competitors design and operate remote-controlled machines.

Moats said the course allows students to use the engineering process to bring their designed models from the computer screen to life. Students earn six hours of college credit and learn mechanical and architectural skills that will help them with potential careers in fields related to engineering.

“It’s basically trial and error,” Gowdy said of learning what works and what doesn’t in crafting the devices.

Fine-tuning parts and putting them together with 3D material is part of the project, according to Gowdy. “From bell to bell, we work on it,” Elliott said.

When Elliott first heard of the engineering course he thought to himself: “I’m definitely doing that.”

Moats said he was looking for a project to challenge the students and the exercise was a good fit. Elliott said he enjoyed bouncing around concepts and the collaborative design efforts.

“The best part for me was to be able to actually work with someone, put our heads together and come up with different ideas,” Elliott said.

Jerose said the activity is the most challenging he’s done in the three years he’s taken the class and he has learned much about reverse engineering.

“You have a few ocular migraines here and there,” Jerose said. “The biggest challenge is making your actual robot relate to the concept.”

The three students said the course is helpful as they ponder future careers. Gowdy, who is interested in environmental engineering, said he’s interviewed at the Virginia Military Institute and has discussed the rigorous but engaging activities involved in the course.

While watching the vehicles tear each other apart in the ring, Gowdy smiled and said to Moats: “Thanks for the experience.”

He joked the students had three years of experience compared to Moats’ three decades.

Amherst County Schools Superintendent Robert Arnold was among several administrators who gathered to watch the machines square off Friday. He commended Moats and said he hopes to see the event grow in coming years.

“This is one of many examples of how Amherst County teachers are engaging their students with hands-on activities,” Arnold said. “The Battlebot Tournament serves the dual purpose of teaching difficult engineering concepts while keeping the activity fun and motivating.”

Jerose was amazed watching as “The Junkyard Bot” continued to run despite losing most of its parts. “The real hero is the cord keeping them together,” he said.

The junior said he’s already planning his next robot and will work on it over the summer for his shot at revenge.

“Better luck next year,” Moats said with a smile.