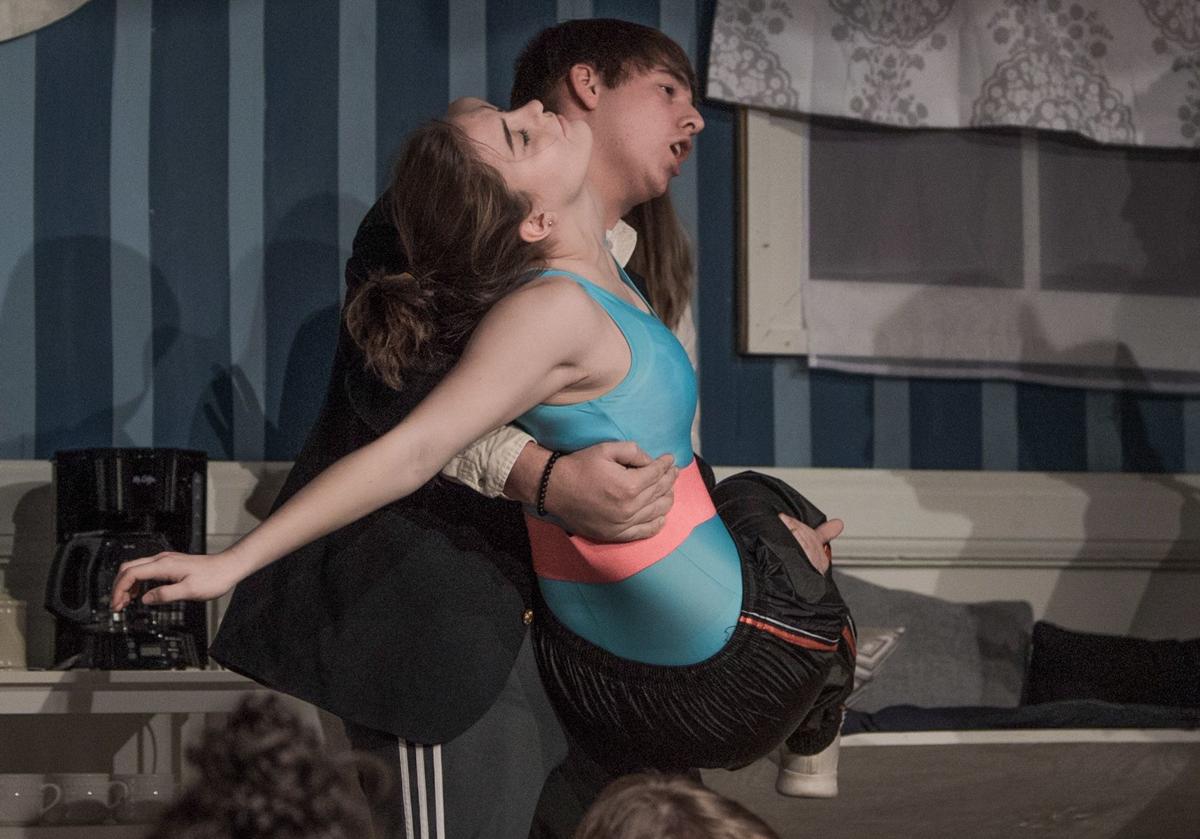 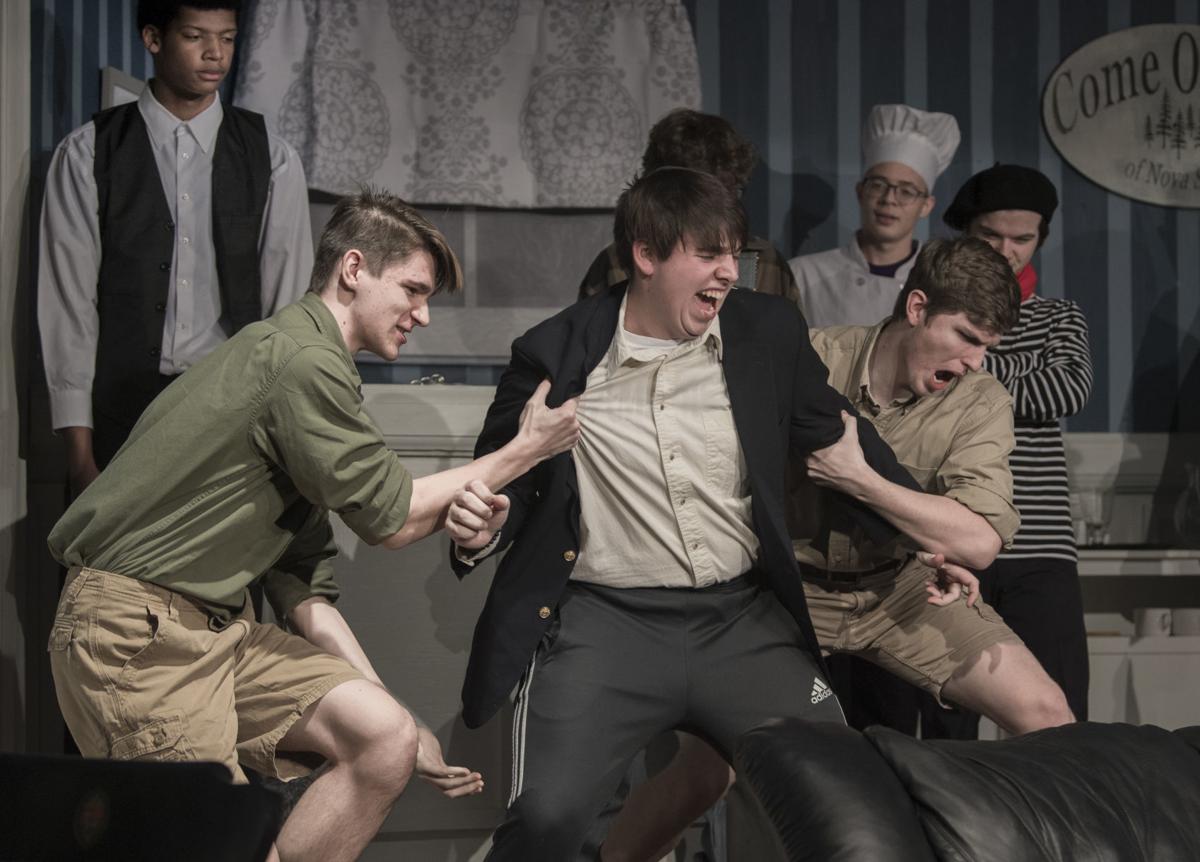 Colson Davis is held for questioning by Logan Scruggs and Leeland Mowery. 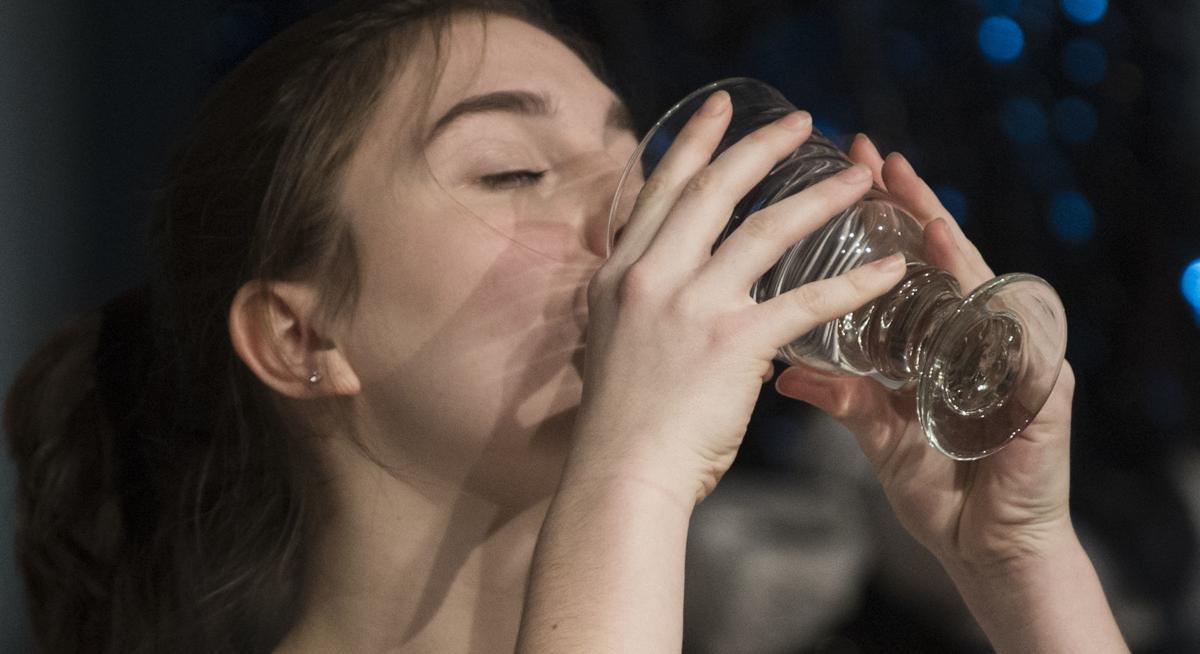 Kennedy Campbell drinks some nasty-tasting lemonade that was thought to be poison. 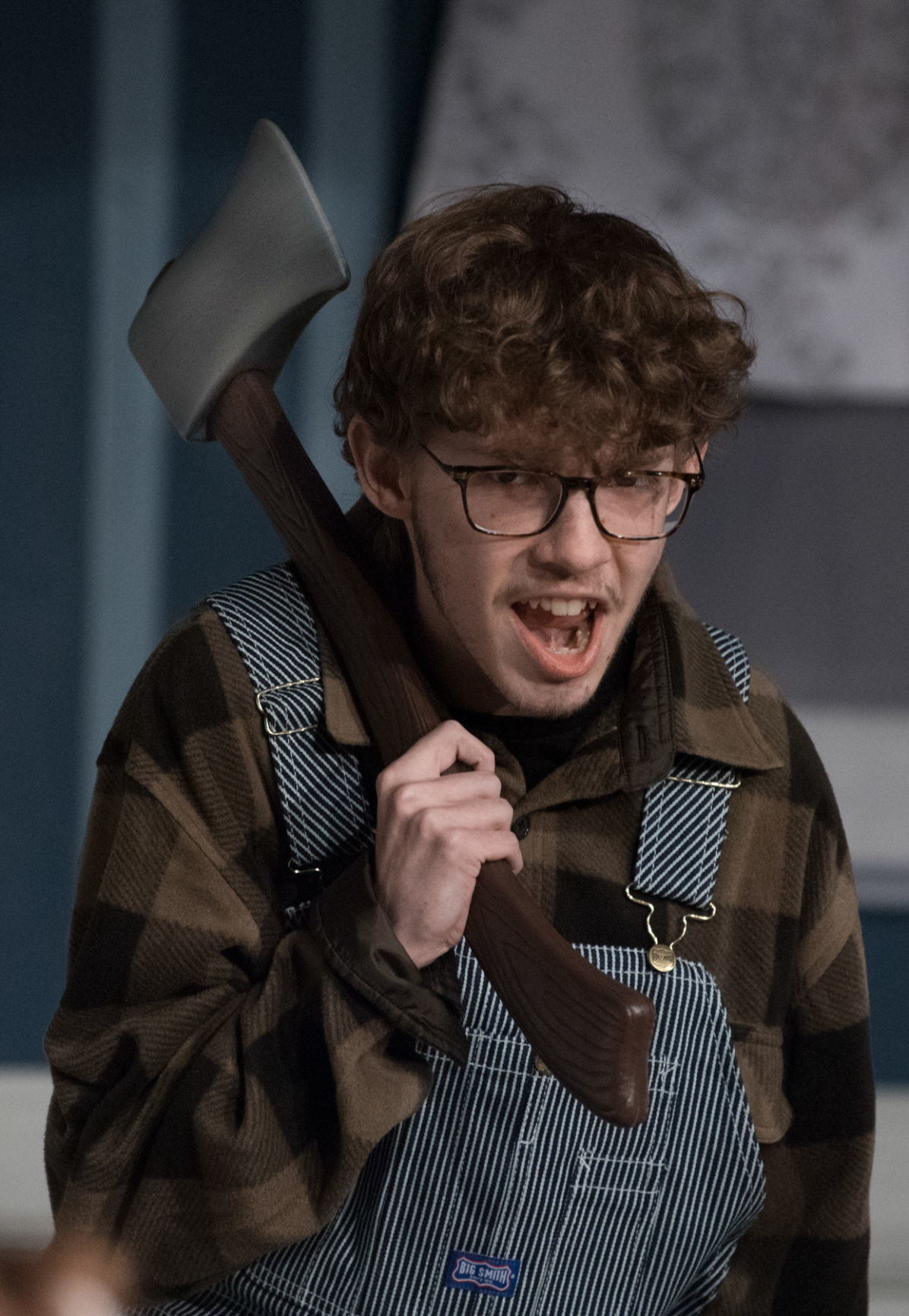 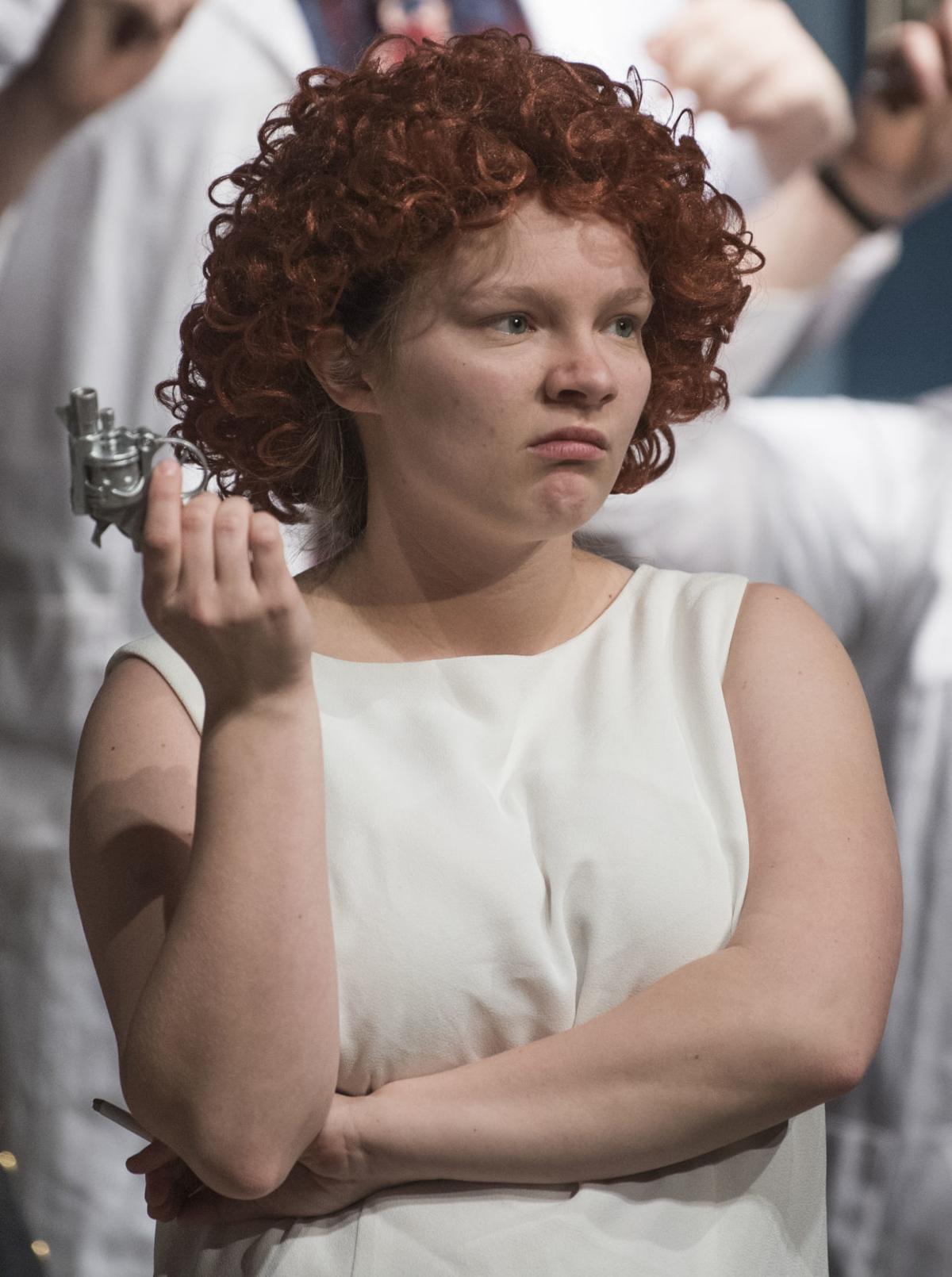 Chloe Ramsey shows a pistol she carries for protection in the play. 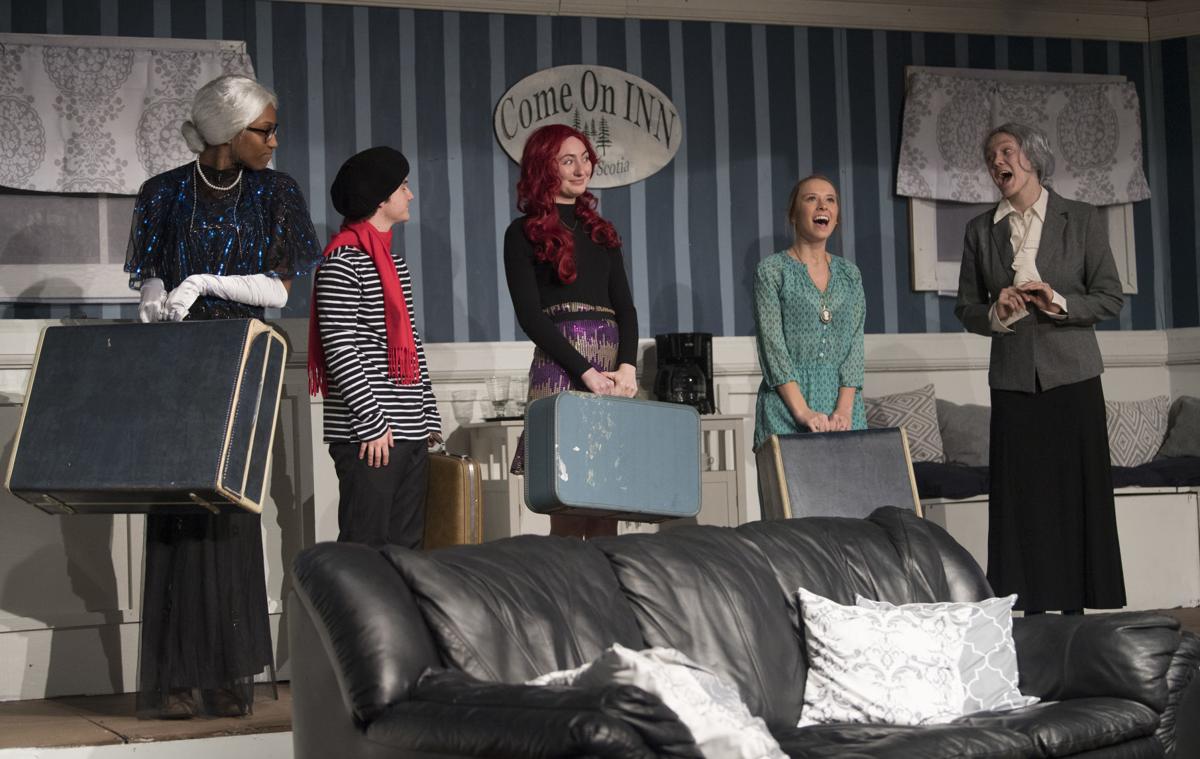 Colson Davis is held for questioning by Logan Scruggs and Leeland Mowery.

Kennedy Campbell drinks some nasty-tasting lemonade that was thought to be poison.

Chloe Ramsey shows a pistol she carries for protection in the play.

The setting: the lobby of the Come On Inn of Nova Scotia.

The premise: an escaped convict is on the loose, and the inn is on a secluded island.

The black box setting for the production, an intimate gathering with the audience on stage with performers and a single set backdrop, is fitting for this Valentine’s Day weekend. The opening performance is Friday and the show continues on through Sunday.

Emmert said the black box style of theater is done at least once a year at the high school and brings the audience closer in to the show. “I love it,” Emmert said. “This is what live theater is all about. The audience is actually part of the show.”

The response of the audience so close to the performance is much of what makes that style of theater so fun, according to Emmert.

The setting is a little more intimidating for the actors, she said, explaining their loved ones and friends are closer than normal. The set piece is her favorite design ever, she said.

The play is family-friendly, full of humor and she invites the community to come and enjoy a good laugh. “It’s definitely a comedy,” she added.

All performances all four nights begin at 7 p.m.

Senior Nick Jones plays Col. Muckle, a “very stern and aggressive” character, and Vanbrune, an enthusiastic, motivated camp counselor. No stranger to black box theater in his two years of performing in the drama program, Jones said the production has its funny and serious moments that will engage the audience.

Matthew Walters, a senior, plays Mr. Hibdonbrown, a camp counselor, is taking part in his first black box-style show. “It’s been a very fun production,” he said of gearing up for opening night of the show.

He said the up close feel of the intimate audience and a single set that stays as is throughout the production are part of the experience. The setting makes it easier for playgoers to see the subtle movements of the performers, he said.

Junior Kyle Sanchez also is looking forward to partaking in his first black box performance. “It’s closer so they should definitely pay a lot of attention to what’s going on,” Sanchez said of what audiences can expect.

Sanchez is playing Bernard, a mime who is he said is very bad at his job. “He doesn’t understand the concept of using his body and not speaking, which makes it ironic,” Sanchez said. “It’s very entertaining to watch, especially on stage.”

The characters and their relationships have much depth and the script is engaging, he said.

“This has been amazing,” Sanchez said of the production. “It’s been a lot to do.”

ACHS production of 'No Body to Murder'

Performances begin at 7 p.m. each night. Tickets are $5.