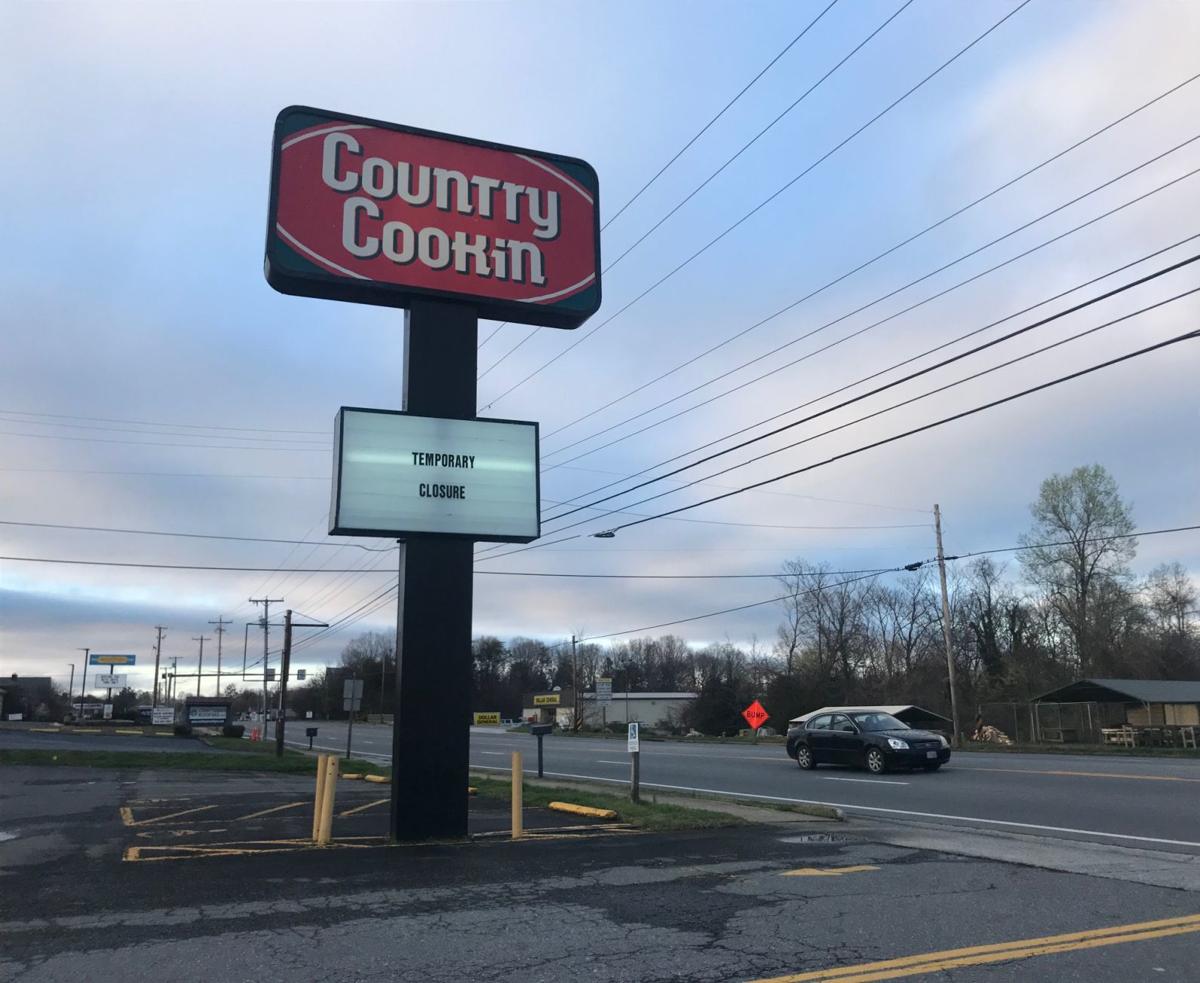 Country Cookin in Madison Heights is temporarily closed due to the coronavirus. 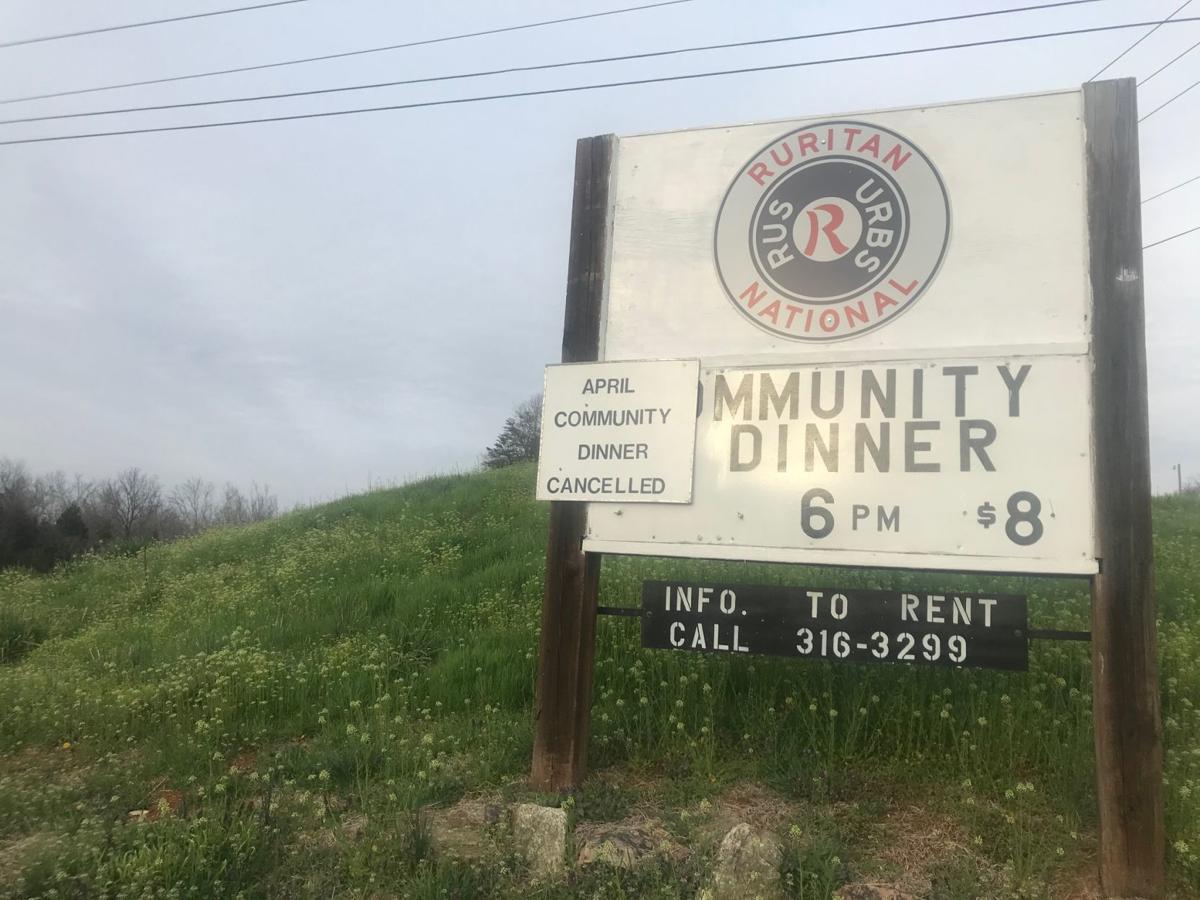 A sign on U.S. 29 Business in Monroe announces the cancellation of the Amherst-Monroe Ruritan Club Community Dinner in April. Virtually all events in the county have been canceled or postponed in Amherst County due to the pandemic, halting a typically busy spring season of local activities. 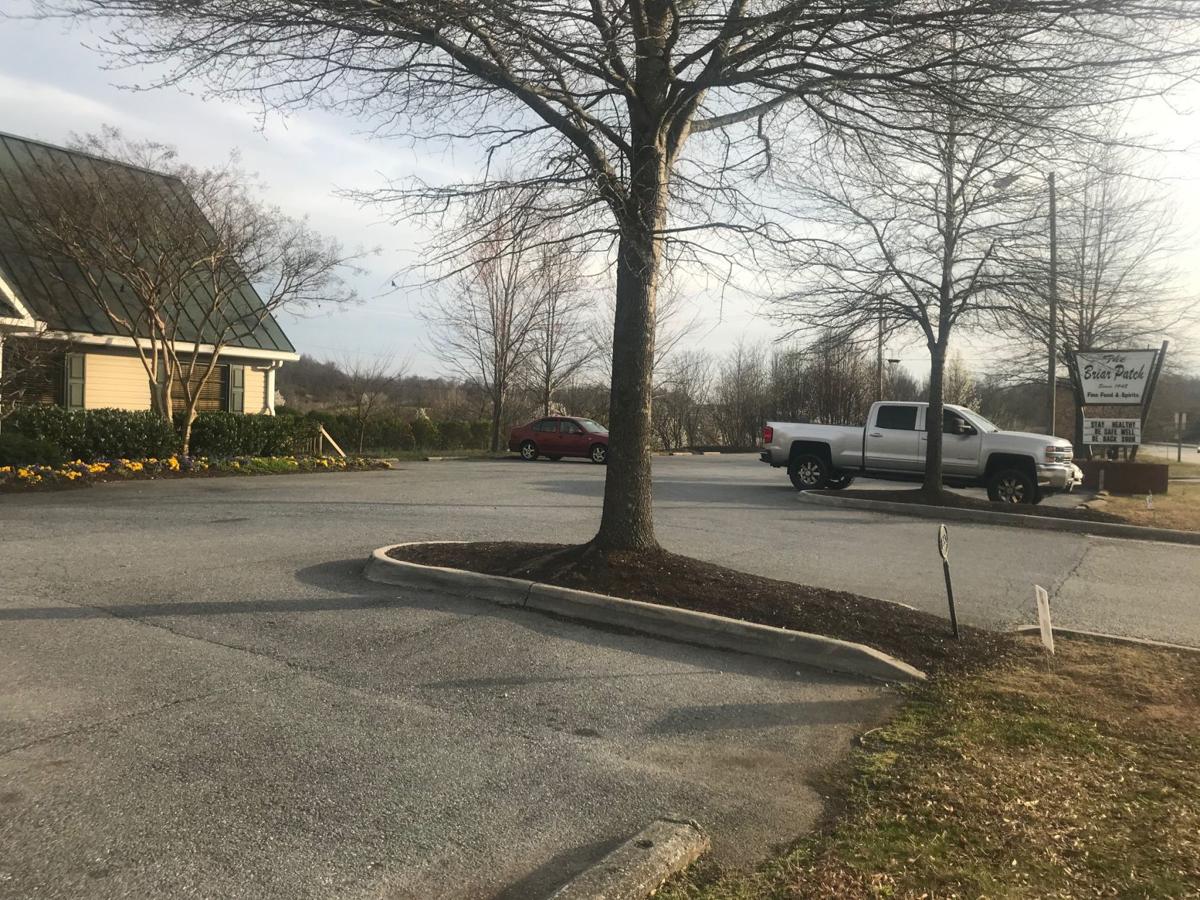 Around 6 p.m. March 18 the parking lot of the Briar Patch in Amherst had only a few vehicles. The Amherst restaurant typically has a full or overflowing parking lot at the same time under normal circumstances.

Country Cookin in Madison Heights is temporarily closed due to the coronavirus.

A sign on U.S. 29 Business in Monroe announces the cancellation of the Amherst-Monroe Ruritan Club Community Dinner in April. Virtually all events in the county have been canceled or postponed in Amherst County due to the pandemic, halting a typically busy spring season of local activities.

Around 6 p.m. March 18 the parking lot of the Briar Patch in Amherst had only a few vehicles. The Amherst restaurant typically has a full or overflowing parking lot at the same time under normal circumstances.

The sound of chimes when someone walks through the front door of the Amherst County Museum and Historical Society are missing, a strange feeling for director Octavia Starbuck.

The museum in the heart of Amherst, a stone’s throw from the town’s traffic circle, like many nonprofits, businesses and government offices has temporarily closed its doors to prevent further spread of the new coronavirus wreaking havoc on the local economy and way of life.

The museum is answering questions for historical research without any charge during the closure period by using its library resources, she said, but is stopping short of going to the Amherst courthouse. A lot of researchers drop in and all of the museum’s programs, which typically draw in mostly senior residents, have been closed through April.

At a time when the majority of residents are staying home and avoiding gatherings due to state government orders, she said residents can use the spare time by looking through old family photos and studying their family history. “With children out of school, I can’t imagine what parents are going through,” Starbuck said.

As of press time Tuesday, Amherst County had one confirmed case of coronavirus and the neighboring counties of Bedford and Rockbridge each had a single case. The Virginia Department of Health’s website Tuesday said 290 people in the state tested positive for COVID-19; seven have died.

Gov. Ralph Northam on Monday announced all public and private schools are closed for the remainder of the school year.

Derin Foor, owner of Loose Shoe Brewery in Amherst, said his business has seen a slow period in recent days and has some supportive customers come in for curbside service. Trivia nights and other gatherings that draw in crowds are suspended.

“That’s put a hurting on the business,” Foor said. “We’re rolling with the punches and doing everything we can.”

He said the lack of traffic at restaurants, stores and other businesses are going to affect tax collections. “It’s definitely going to have a trickle-down effect. It’s a widespread problem,” Foor said. “I look forward to being on the other side of this.”

Restaurants particularly play a vital role in the town government’s annual budget, which pulls in much revenue from the meals and beverage tax. In past years town officials suspended the real estate and personal property tax rates. “We worked hard for years to get it to that point,” said former mayor Paul Kilgore, who was on council when the measure was enacted.

Kilgore hopes economic damage from the pandemic in Amherst is minimal.

“Nobody is going to come through this unscathed,” Kilgore said.

Amherst County Sheriff E.W. Viar said his department still is providing vital services to the public but is limiting itself as much as it can and using common sense. While the office hasn’t seen an unusual uptick in crime, he is concerned incidents may rise when residents are hurting financially.

Viar said he is hopeful the county can weather the storm and struggling small business owners pull through. “I’m worried about everybody being able to make it,” Viar said. “It’s a scary time. A lot of people are worried to death ... the biggest thing is use the social distances and try not to go to stores. We’re all going to have to suffer a little bit.”

Viar and Amherst town police chief Robert Shiflett each said there have not been any significant problems enforcing the 10-person limit on gatherings. Shiflett said town officers are being mindful of social distancing and he urges residents to check on neighbors, especially the most vulnerable.

“We’re trying to be overly cautious. You got to be,” Shiflett said. “A lot of things we can handle by phone. If there’s an emergency, we’re here.”

Rodney Taylor, an Amherst County resident and owner of Market at Main in Lynchburg, said city officials’ recent tax relief measures to support restaurants and other businesses already struggling during the crisis is appreciated.

“We needed this lifeline and I am incredibly appreciative of the city for doing this — these are the toughest times any restaurant has ever faced, or the restaurant industry as a whole has ever faced,” Taylor said.

Amherst Glebe Arts Response, Inc., a nonprofit, has cancelled all activities through April.

AGAR, Inc., which serves to enrich the Amherst community through the arts, was founded 14 years ago this month and never has experienced such a disruption in activities, Kable said. She took art supplies to residents at Fairmont Crossing Health and Rehabilitation Center on March 16 to keep them occupied because of visitation restrictions.

AGAR events bring in acts from all over the country and internationally, and Kabel hates canceling some of those performances.

“Those people make their living by performing,” Kabel said. “They need the money.”

Michele Poindexter, a county resident who attends Scott Zion Baptist Church in Madison Heights, said the services have streamed online the past few weeks and she misses the praise and worship and physical contact. “I’m a hugger,” Poindexter said. “I miss the hugs and the love.”

She said she is spending time with grandchildren during the school closures. “The parents have to become very creative right now,” Poindexter said.

Gary Lee, pastor at Scott Zion, said the church hasn’t had gatherings the past two weeks. The church’s tools in the uncertain time are prayer and social distancing, he said.

“What I’m telling people is this is a war. It’s not a conventional one. The way we fight this war is we have to do our part,” Lee said.

He added of social distancing particularly is difficult. “It’s tough for me because I love the people. They love me back. It’s just like your family,” Lee said. “We’ll get through this. But there’s been a lot of sleepless nights and a lot of frustrating moments ... It’s unprecedented to say the least.”

Todd Peck, pastor of Living Word Christian Fellowship in Lowesville, said his church has created an online platform for the congregation to interact and is making itself available to meet needs of the county’s most vulnerable residents.

“There are occasions such as these we can’t just predict. We have to make adjustments. We can gather in spirit,” Peck said. “The church is not a building. The church is the people.”

A pastor of 10 years at Living Word, the 52-year-old has never seen such a disruption in church services. “As pastors, we’re called to serve in good times and bad times.”