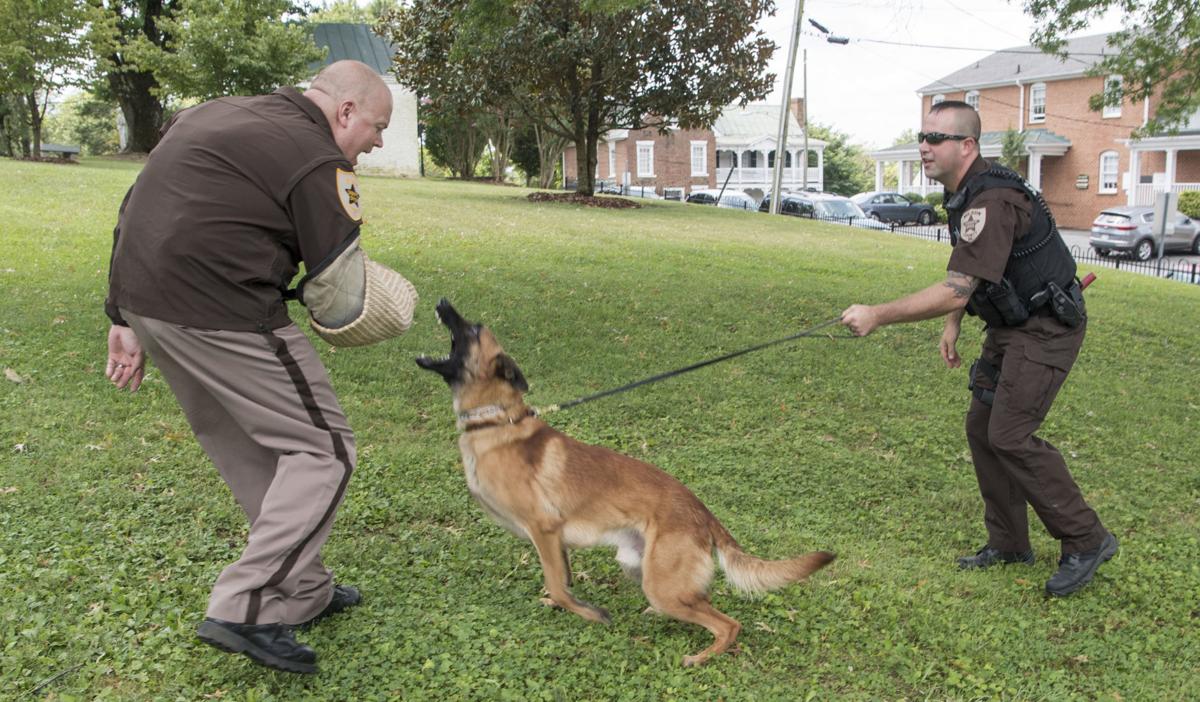 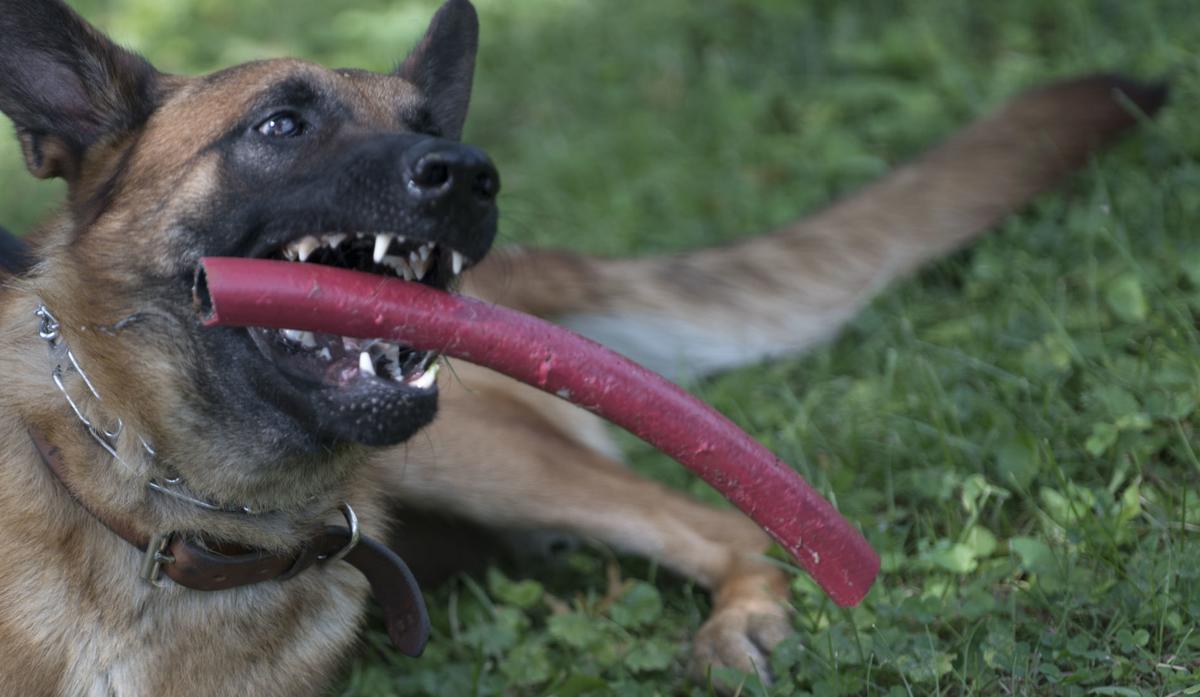 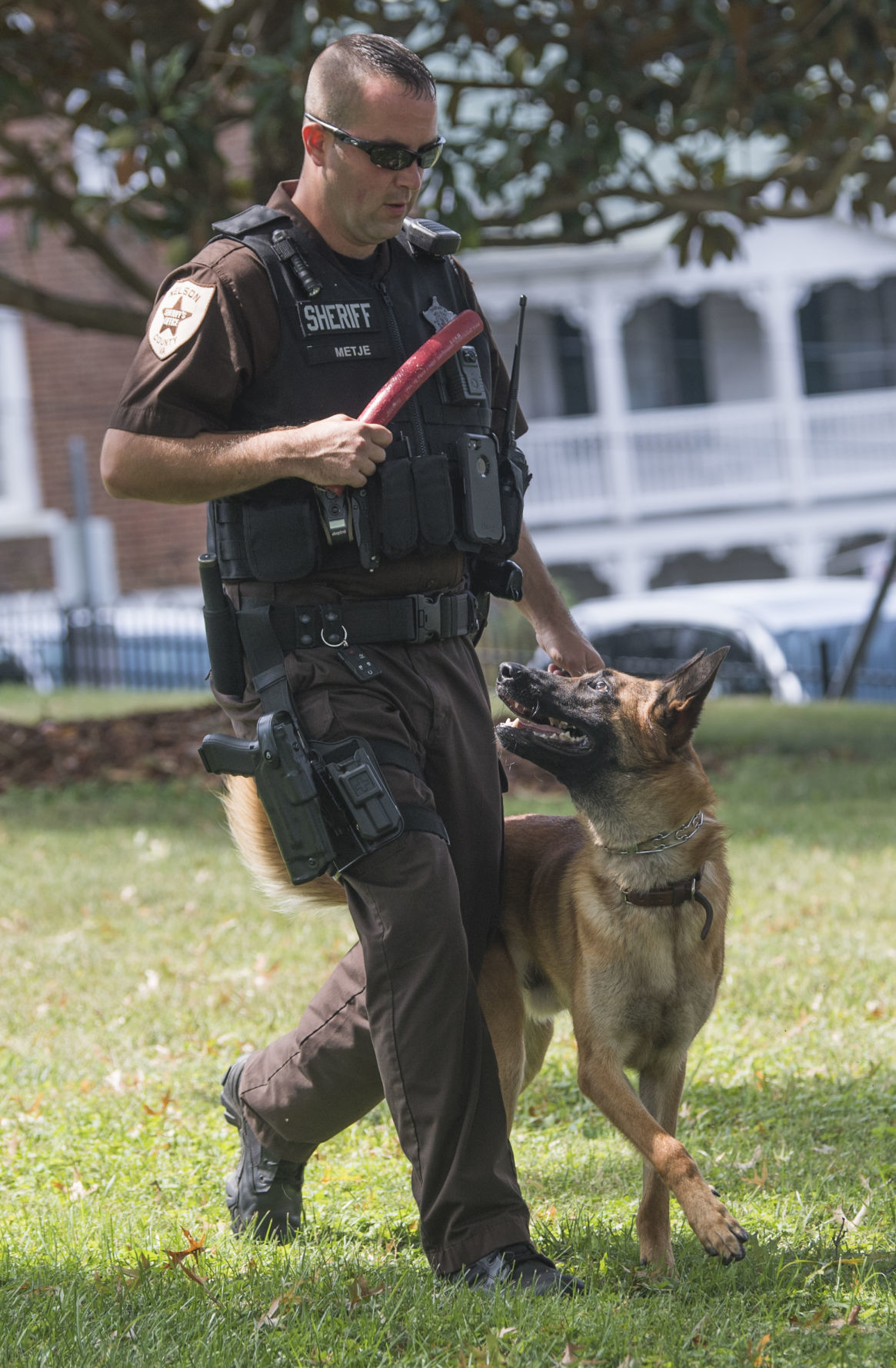 Since joining the Nelson County Sheriff’s Office in January, Metje has worked to get a new K-9 certified and street-ready. He and his one-and-a-half-year-old Belgian Malinois named Xombie attended a six-week training program this summer and officially completed the program on Aug. 2. Just eight short days later, on Aug. 10, Xombie located a person who police said had run away from law enforcement after ramming his vehicle into a patrol car.

Mettje has been a K-9 handler for eight years. “I fell in love with it,” Metje said.

Xombie is from the Netherlands and was trained at Shallow Creek Kennels in Pennsylvania.

John Brannon, president, owner, and founder of Shallow Creek Kennels, said the kennel usually has between 60 and 90 dogs at one time being trained to join a police department. The company has been selling police dogs all over the United States since 2004.

“The dogs are flown from Europe to the States. They start training in areas applicable for patrol and tracking,” Brannon said.

Brannon, who has over 20 years experience in law enforcement and K-9 handling, said Europeans usually do an excellent job breeding and training the dogs for the needs of police departments. Shallow Creek Kennels sells the dogs for anywhere between $8,000 and $20,000 depending on the level of training they have. The Nelson County Sheriff’s Office paid around $14,500 for the dual purpose K-9 — a patrol and narcotics dog — and the training, using money seized from former drug dealers, according to Sheriff David Hill.

“The dogs are assets to law enforcement. They help the community. They make the community safer and make the officer safer,” Brannon said.

In 2016, Hill’s first year in office, the office had a K-9 named Jax, which had been donated by the Vinton Police Department.

The K-9 program was ended in 2016 when, according to documents provided by Hill, the dog was retired due to hip issues and adopted by its former handler at the Vinton Police Department.

Documents from the Lovingston Veterinarian Hospital provided by Hill show pain medications prescribed in July 2016, but do not include any assessment of the dog and its abilities, or lack thereof, to work for the department.

The effort to start the latest K-9 program began in 2019 because Metje, who wanted a K-9 unit, had joined the department and funding from drugs seized from former drug dealers was available to support it.

Hill said they now have this K-9 program because these dogs are a bonus for any agency to have, a great resource and a great tool.

“Sometimes users and traffickers may go unnoticed, but with our additional tool ‘Xombie,’ we increase our chances of detecting illegal substances. [K-9’s] can also be utilized to search for subjects,” Hill said in an email.

Hill went on to say it takes a great deal of commitment from a handler to have a proper program.

“In January this year, an experience [K-9] handler joined our agency shortly after his [K-9] was retired from service with his former agency,” Hill said in an email.

At Shallow Creek Kennels, Xombie went through extensive narcotics and patrol training, among other subjects, before getting certified. For Metje, the biggest thing to learn during training was decision making, when to use Xombie in a search and seizure, determining use of force, and knowing when and how to implement Xombie on a day-to-day basis. Metje said it was anywhere from 10 to 12 hours of training, five days per week with midday breaks.

“When I come to work, he comes. We are here to assist road deputies. We are back-up for them and more or less an added officer,” Metje said.

For the new partners, the bonding never stops. Metje takes Xombie everywhere with him and keeps him in a kennel in his home at night. Xombie is never off a leash while with Metje and in order to keep the bond and trust going, Metje discourages the public from petting him.

“It can be anywhere from eight to 12 hours of training a day,” Metje said.

This constant bonding creates trust between Metje and Xombie, which is vital to safety and success in the field. Metje uses Deputy Scott Craig to demonstrate why it’s important to have a fully-trained dog who listens to only him. Craig puts on a bite sleeve to protect himself and then starts yelling at Xombie, getting him riled up. On Metje’s command, Xombie lunges at Craig, chomps down hard on his arm, and holds on tight, despite Craig’s efforts to get him off. Xombie won’t let go until Metje tells him too. Even after the demonstration is over, Xombie barks ferociously at Craig walking away.

Metje said in his eight years of experience as a K-9 handler, European dogs are usually more purebred and have begun basic training as puppies.

“The drive, hunt, and fight are just natural to them,” Metje said.

Metje said his patrol vehicle is outfitted with a large section behind the driver’s seat where Xombie can securely and comfortably be in the car, but safely away from any prisoners that may be in the vehicle as well. Another key feature of the vehicle is the device attached to Metje’s belt that shows him the temperature in the car at all times and allows him to open the vehicle if necessary.

“I can pop the vehicle open and [Xombie] can get out and come find me in case of an emergency,” Metje said.

The next step to ensure the longevity of this program that allows Metje to keep his furry partner is joining the Virginia Police Canine Association, which he hopes to complete by the end of 2019. The VCPA is a law enforcement group that certifies and trains K-9s, requires members to have annual certifications to make sure the K-9 and handler are proving their proficiency in accordance with the state guidelines, and provide legal updates necessary for the K-9 handlers to be aware of.

“It’s exciting and fun. You get all the aspects of the job but also a little partner,” Metje said.