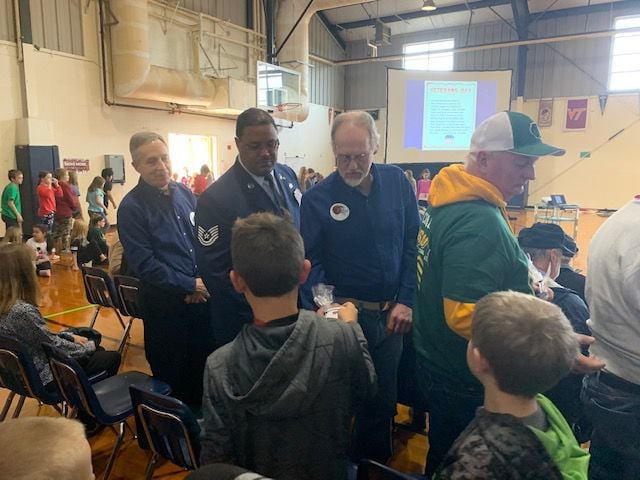 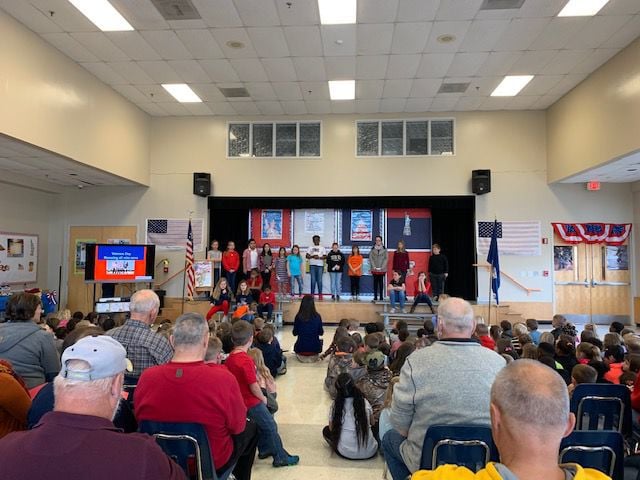 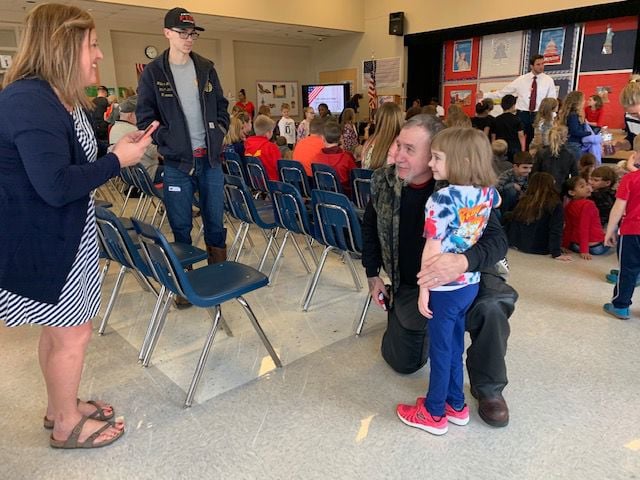 William Hart, a Marine Corps veteran, poses for a picture with his granddaughter Cheyanne White on Nov. 11, 2019. 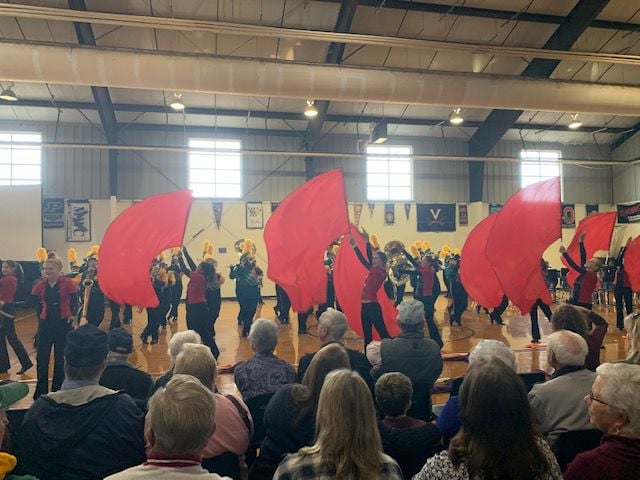 William Hart, a Marine Corps veteran, poses for a picture with his granddaughter Cheyanne White on Nov. 11, 2019.

At Tye River Elementary School, the cafeteria was full of students, staff, faculty and guest veterans from the Army, Navy, Air Force and Marines. To start the ceremony, students presented the colors, meaning they brought forward and presented the state and country flags. The Tye River Honors Chorus sang a number of songs including “The Star Spangled Banner” and a tune called “On Veterans Day.”

Principal Marti Bradt led the 30 minute presentation, telling the audience how much the school appreciates veterans and introducing each section of the ceremony.

“Thank you for your sacrifice, service and dedication for all of us,” Bradt said.

Students also read aloud the history of Veterans Day in America. As the “Armed Forces Medley” played, service members were asked to stand when the anthem for their specific branch came on and a slideshow presentation displayed every veteran’s name. The veterans in attendance were family members of students as well as the school’s resource officer, John Grieser. William Hart, a Marine Corps veteran, said he likes the school’s ceremony and believes it’s important for students to learn about Veterans Day.

Hart has granddaughters at the school and said it’s good the students learn about America’s military.

“They appreciate everything,” Hart said about the students and staff.

On the other side of the county, Rockfish River Elementary School also hosted a Veterans Day assembly for the 14th year in a row. The high school marching band, led by Scott Belcher, performed patriotic tunes and a portion of its marching band show. Nelson County Commonwealth’s Attorney Daniel Rutherford was honored as the guest speaker. Rutherford is currently a Major in the Army reserves.

“Service is such an important thing we need to instill into our community,” Rutherford said.

Rutherford told the audience, which included more than 20 veterans, to remember service individuals every day, not just on Veterans Day in November or Memorial Day in May.

Stacey Johnson, the library media specialist, led each portion of the assembly and members of the school’s student body read poems for the veterans and the history of the remembrance day in the country.

“We’re thankful for all the veterans we have today,” Johnson said.

Like at Tye River Elementary School, the “Armed Forces Medley” played and when the guest veterans heard their individual branch anthem, they stood. Dale Butler, an Army veteran, said the program was outstanding.

“I’m originally from Long Island and they didn’t do this there,” Butler said

Butler said this is the second year coming to Rockfish River for the event.

“I really enjoy it. They do a great job,” Butler said.

Alonzo Taylor, an Air Force veteran, said he’s been attending the event for the last five or six years. Taylor served in the Air Force for close to 30 years.

“They just do an outstanding job,” Taylor said.