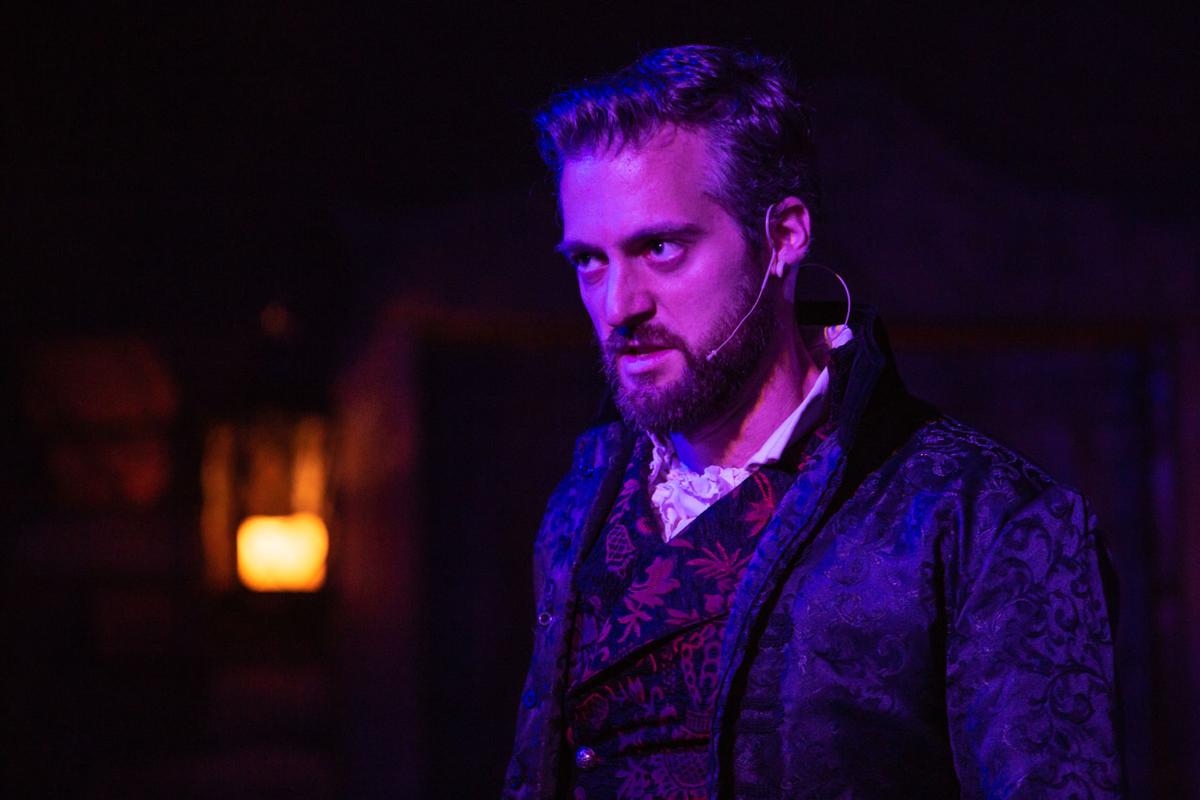 Stephen Sondheim’s “Sweeney Todd: The Demon Barber of Fleet Street," which will be staged by Wolfbane Productions starting this week, tells the story of Victorian barber Sweeney Todd. After being wrongfully incarcerated and shipped off to Australia for 15 years, Todd returns to London seeking revenge on those who destroyed his life. 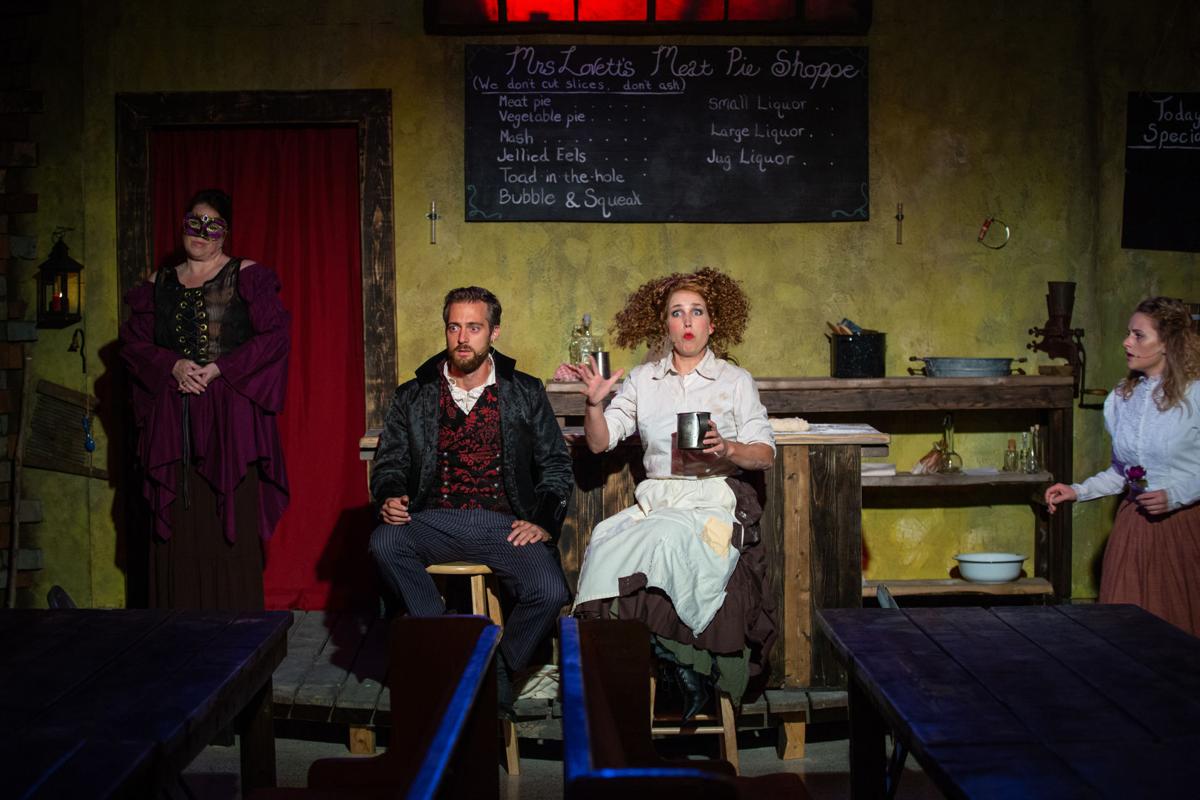 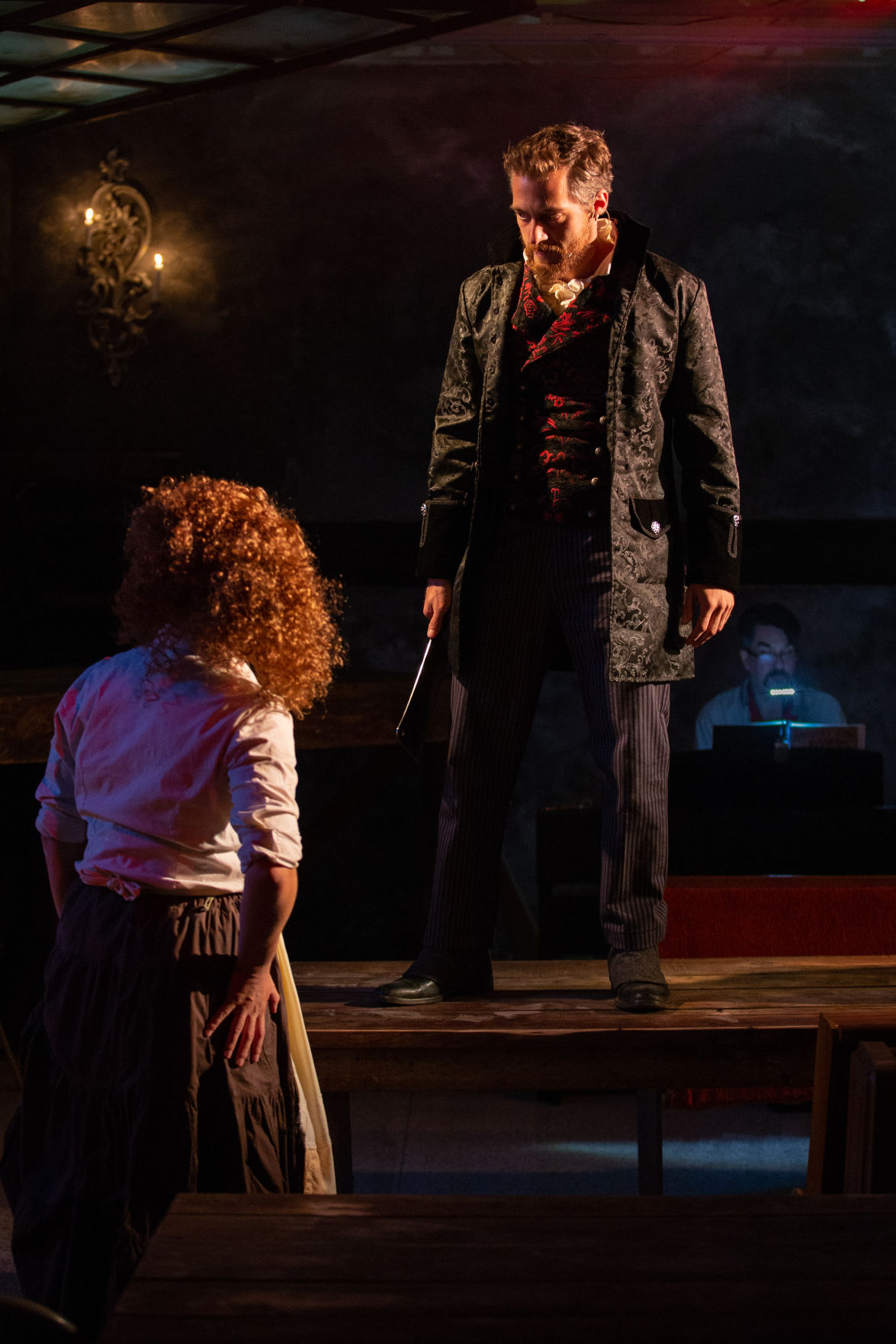 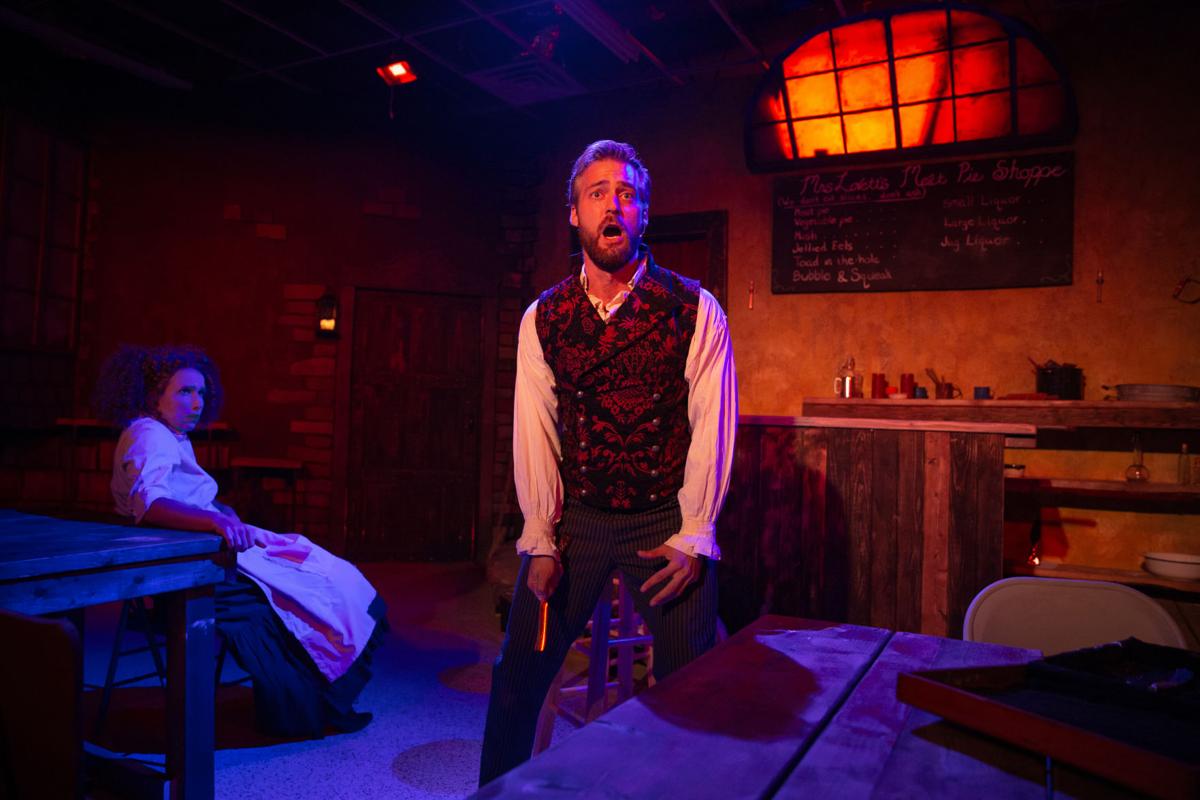 Trevor Martin as Sweeney Todd in the production. 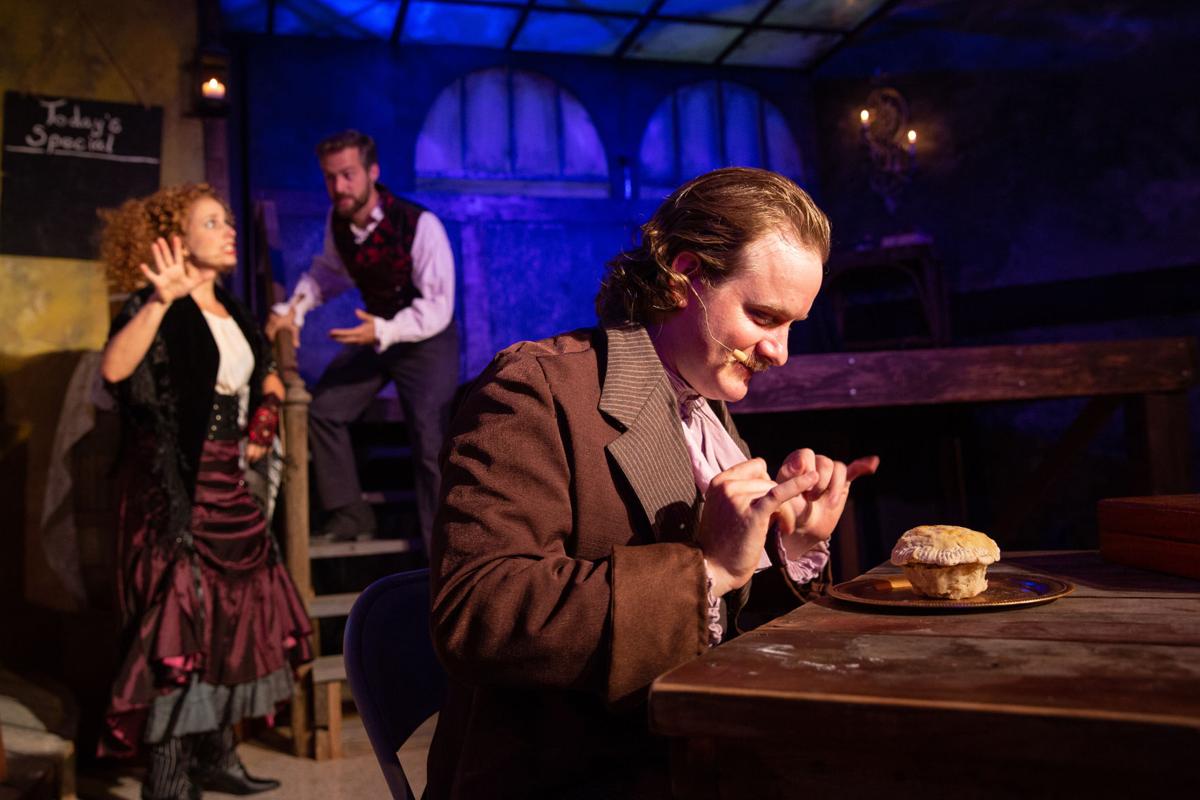 A pie shop customer prepares to eat one of Mrs. Lovett's creations in "Sweeney Todd."

Stephen Sondheim’s “Sweeney Todd: The Demon Barber of Fleet Street," which will be staged by Wolfbane Productions starting this week, tells the story of Victorian barber Sweeney Todd. After being wrongfully incarcerated and shipped off to Australia for 15 years, Todd returns to London seeking revenge on those who destroyed his life.

APPOMATTOX — Inside a formerly vacant strip mall unit that’s been transformed into a Victorian pie shop, Sweeney Todd, his face scarred and eyes haunted, turns a shaving cream-covered victim away from the audience toward the wall.

The music crests as the lights dim to a dark red.

Languorously, Todd draws his blade across the man’s neck as he sings, and a stream of blood spews onto the wall for viewers to see.

With a jerk of his arm, the barber pulls a lever on his chair and his victim’s now-lifeless body drops out of sight through a strategically placed trap door in the floor.

When another body, throat gaping, soon follows down the chute, it’s hard to stop the words that were sung only moments earlier from flooding back.

After being wrongfully incarcerated and shipped off to Australia for 15 years, Todd returns to London seeking revenge on those who destroyed his life.

Like the era from which it was first derived, the musical version of “Sweeney Todd” doesn’t shy away from violence — it almost always revels in it with fiendish glee.

“It goes back and forth between making us laugh and scaring us,” says Aaron Thomas, Endstation Theatre Company’s literary manager, whose book, “Sondheim and Wheeler’s ‘Sweeney Todd,’” explores the musical’s bloody proclivities.

“… I think ‘Sweeney Todd’ works exactly in the same way a good horror film is supposed to work.”

The production also leans heavily into the heightened emotion of melodrama, while also emphasizing the inherent comedy in the show, which keeps the deaths from feeling too dark. Playing the violence too seriously makes it more realistic and therefore more disturbing, something Wolfbane Artistic Director Dustin Williams says the company wants to avoid since its audience will be so close to the action.

Theater-goers brave enough to choose premium seating — which has been arranged to feel as if one is sitting inside Mrs. Lovett’s shop — will have the story unfold around them as actors stomp across the tables in front of them and deaths happen virtually in their laps.

“The biggest kill isn’t going to happen up on a stage, it’s going to happen at somebody’s fingertips,” says Williams, who is directing the production, which opens Thursday and runs through Oct. 13.

“It becomes very in-your-face, so it needs to be so glaringly over the top.”

We’ve seen the headlines: today's audiences have been desensitized to certain types of violence thanks to its constant presence on our screens.

“‘Game of Thrones’ wouldn’t be a show if we didn’t like violence,” says Williams.

But this trend in entertainment didn't start in the 21st century.

Greek tragedies often ended in violence, though much of it happened offstage, with a character announcing the act to the audience, while ancient Romans watched gladiators fight to the death.

“It may be that battle reenactments are the oldest theater,” says Thomas, who currently teaches at Florida State University and has been studying violence in theater since 2007.

The same tradition of violence onstage continued through the days of Shakespeare, whose tragedies often featured murder, mayhem and maiming — though, like the Greeks, never for the audience to witness.

Violence as entertainment took center stage in England during the Victorian era, a concept contradictory to our typical view of the time period’s sensibilities. As industrialization and urbanization boomed, these changes created an even starker contrast between the haves and the have-nots in London life, university lecturer Rosalind Crone wrote in her book, “Violent Victorians: Popular entertainment in nineteenth-century London.”

Entertainment, she argued, began to focus less on the aristocracy and more on the common people and “the extremes in which the lower classes were forced to live and work generated a desire for extremes in the entertainment they patronized.

“Living in close quarters characterized by poverty and hardship meant that these men, women and children were very familiar with drunkenness, conflict, violence and death.”

Posters depicting gruesome executions lined the streets. Criminals and victims of the guillotine were immortalized in wax. Sensationalized reports of murders filled the papers and reenactments of these crimes followed onstage.

Violent exploits and crime stories flooded the market in detective novels and the penny dreadful, a popular form of cheaply-made, serialized fiction published in weekly segments for a penny each.

“Murder, brutal forms of discipline, duels and brawls, to name but a few, were presented to audiences in a more extreme manner than they had ever been in previous centuries,” Crone wrote.

Violent entertainment, which was likely a reaction to sudden change, served as a means of expressing discontentment, challenging the establishment and uniting people over perceived evils, Crone explained.

It was from this world that the specter of Sweeney Todd appeared, first in a penny dreadful, which ran for 18 weeks from 1846 to 1847, and again in a book version three years later.

Before the serial had even finished its run in print, the story took to the stage as a melodrama and, over the years, made the jump to radio, silent movies and even songs. Each version spoke of a crazed barber who slit the throats of his unsuspecting customers.

Things changed when the story returned to the stage in 1973, this time as a tragic play by Christopher Bond that gave the formerly amoral character a heartbreaking past and a reason, other than insanity, for his murder spree.

It was this play that inspired Sondheim

When the musical premiered for modern audiences in 1979, it combined certain aspects of melodrama with a tragic anti-hero on a mission of revenge.

In a whirlwind of movement back in Appomattox, Mrs. Lovett flits around the tables in her shop, dishing out piping-hot pies to customers between whispers with Todd, as they plot how to dispose of his victims right under their noses.

“More hot pies,” the eager patrons sing in unison, followed by an equally exultant exclamation as their voices reach for the sky: “God, that’s good!”

Almost two centuries after it first entered public consumption, Todd’s story proves universal, playing on real fears — what Thomas defines as fear of pain and fear of the unknown — just as it did for audiences in the 19th century.

Through its frequent dispatching of less-than-savory characters in horrific fashion, the musical allows a new generation to find satisfaction in their own discontentment with authority and the status quo, adds Williams.

Wolfbane has a history of going all out in its productions — especially the horror-comedy “Evil Dead The Musical,” which included a splatter zone where audience members could get doused in fake blood.

Though “Sweeney Todd” won’t have a splatter zone, Williams says they have five gallons of fake blood ready, and he expects they’ll need to order more to get through the show’s four-week run.

“It’s so fun you end up — as bad as it sounds — rooting for the violence,” Williams says. “You embrace it.”

When: 8 p.m. Thursday, Friday and Saturday, with more performances on select dates through Oct. 13

Tickets: Range from $20 to $35; Wolfbane also is selling savory and sweet pies for an additional $8

Column: Arts and culture events to look for in 2019

Wolfbane staging 'A Gentleman's Guide to Love and Murder'

Since Wolfbane Productions started producing shows in 2008, it has enraptured audiences with its inventive and, quite frankly, eccentric inter…