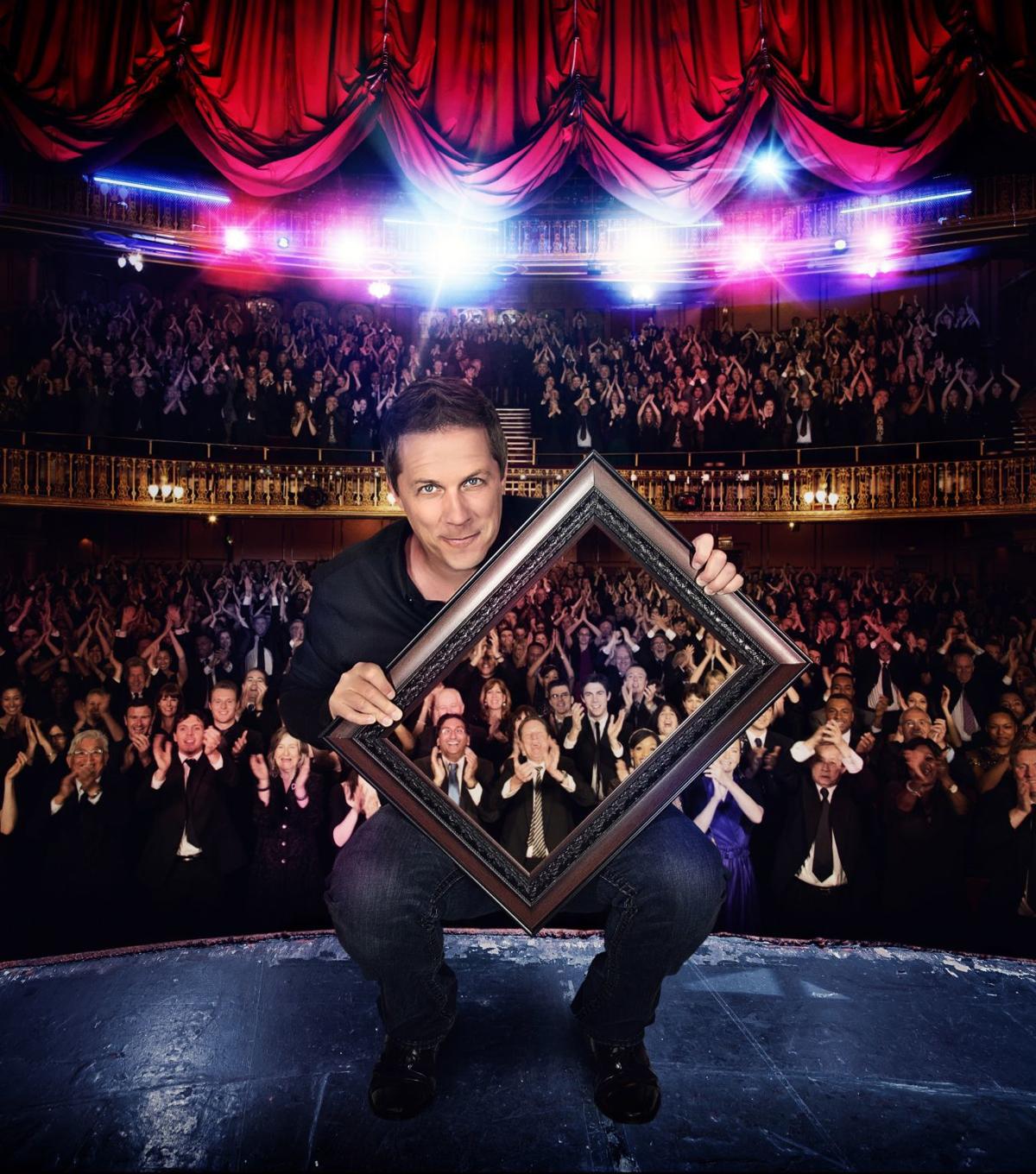 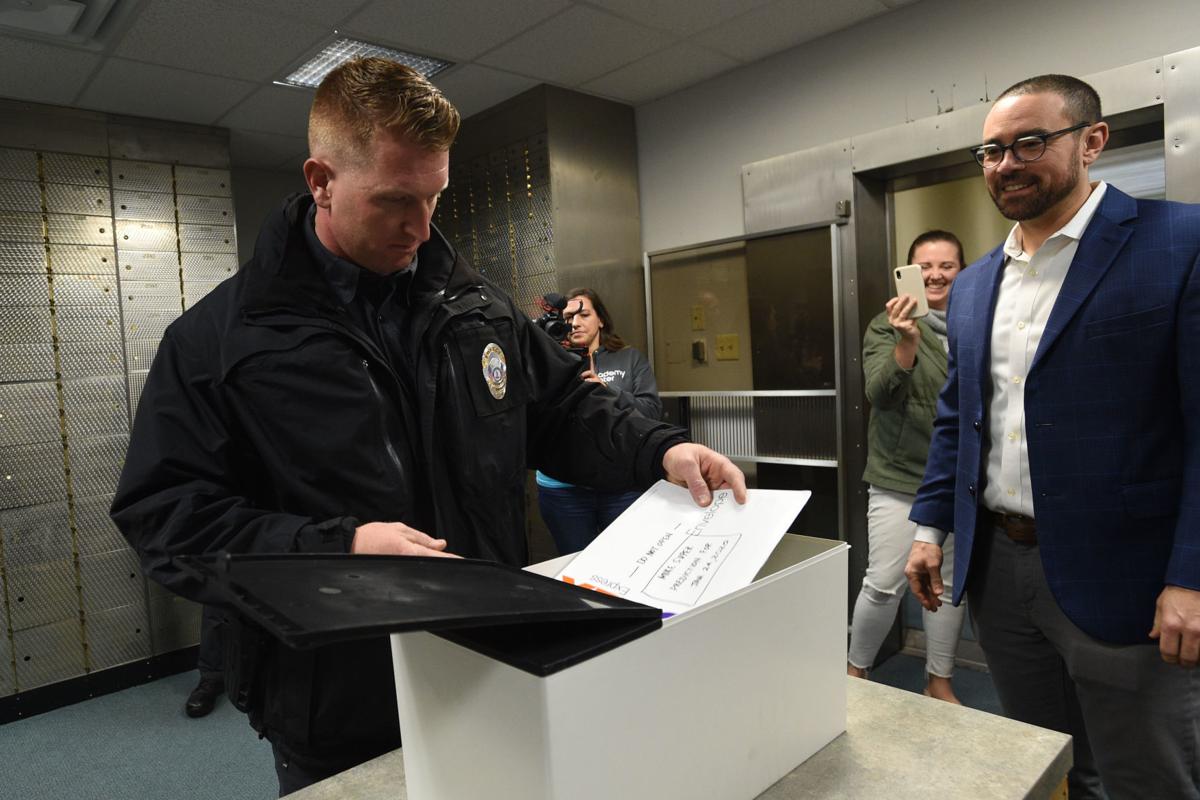 Vinnie Santini, a BWX Technologies police offer, places a sealed envelope — with magician Mike Super's headline prediction inside — in a safety deposit box at Bank of the James in Lynchburg on December 13, 2019, as Academy Center of the Arts Executive Director Geoffrey Kershner looks on. Super will reveal his prediction during his Jan. 24 show here. 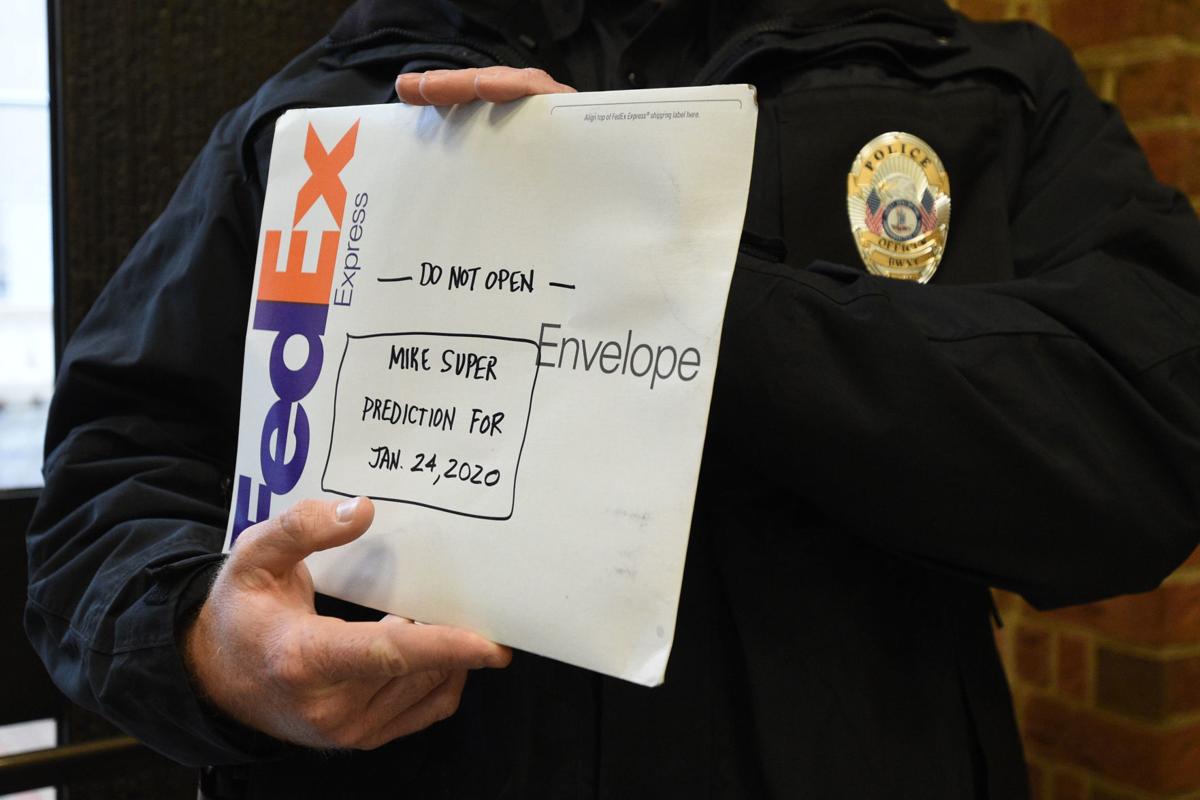 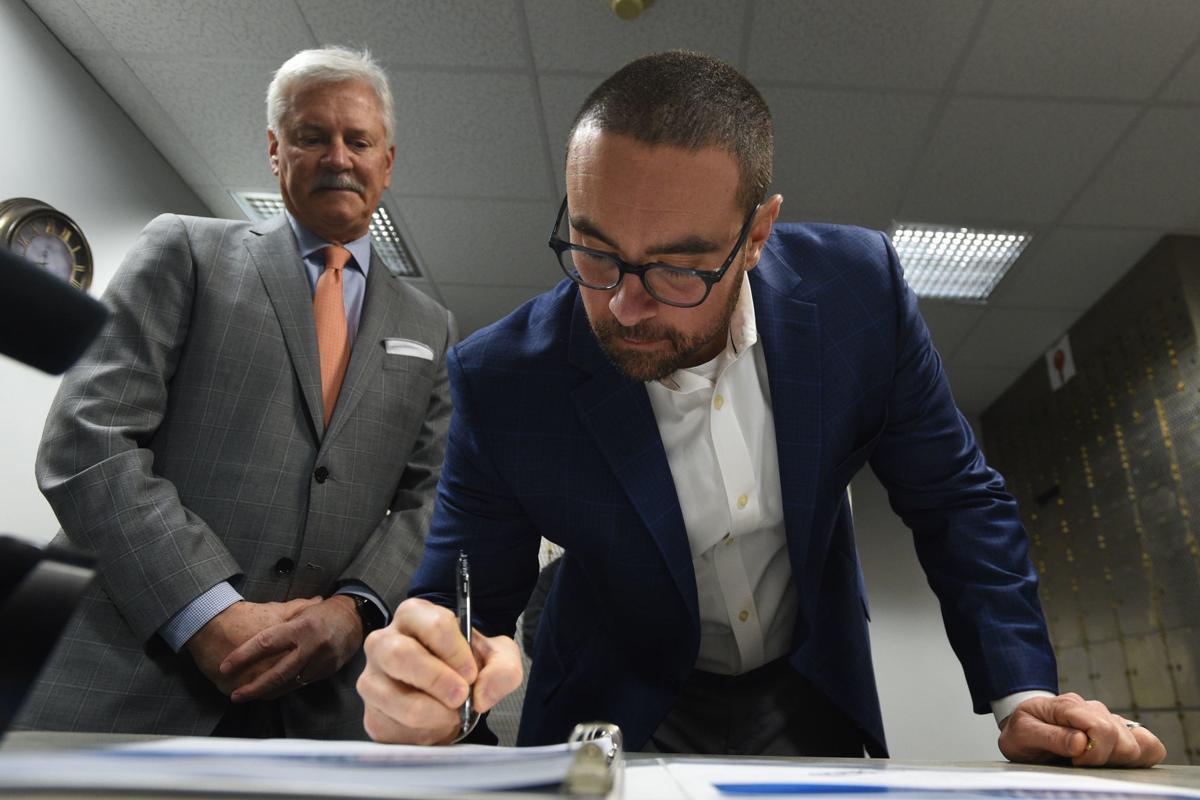 Geoffrey Kershner, executive director of the Academy Center of the Arts, signs an insurance policy on the package containing magician Mike Super's prediction at Bank of the James in Lynchburg on December 13, 2019. The policy insures no one will open the envelope prior to the event on Jan. 24. 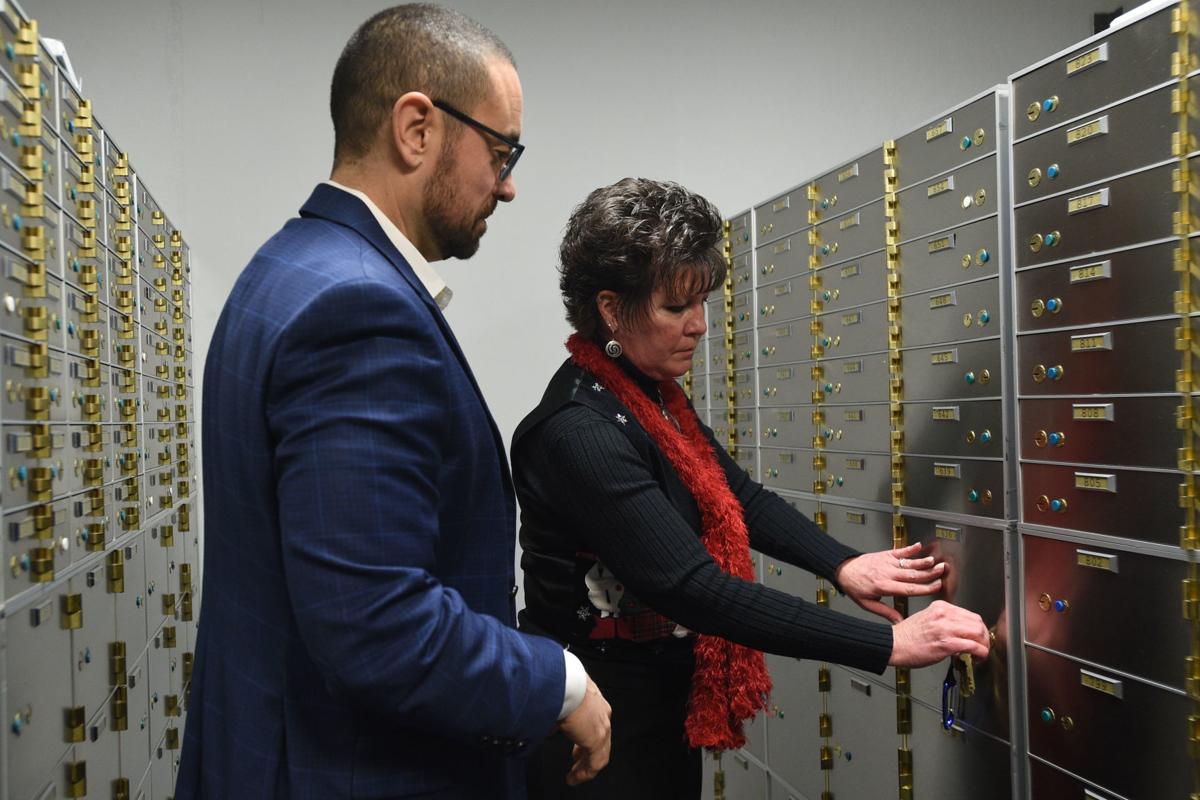 Wendy Webster, financial services representative with Bank of the James, opens a safety deposit box for the envelope at Bank of the James in Lynchburg on December 13, 2019. Two keys are required for each box, one will stay with someone at the Academy and the other at the bank. 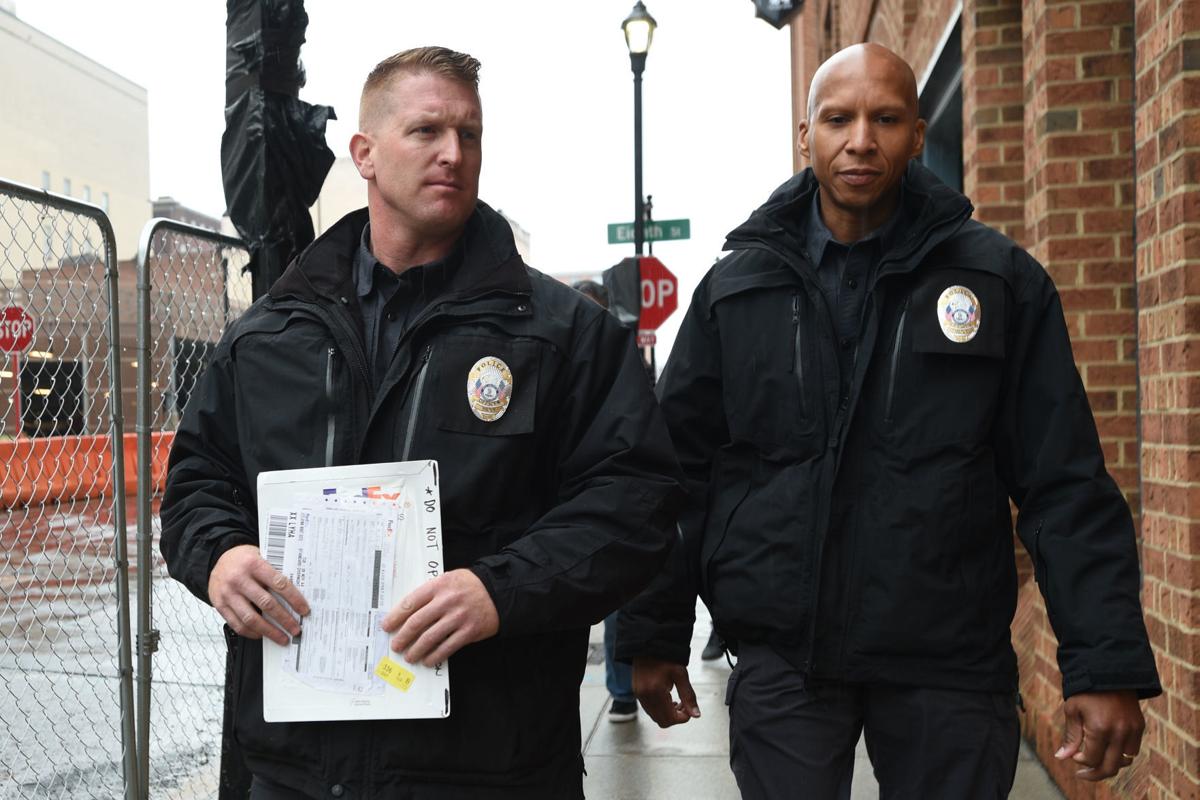 Vinnie Santini and Shan Ingram, BWXT police officers, walk the sealed envelope to Bank of the James on Main Street in Lynchburg on December 13, 2019.

Geoffrey Kershner, executive director of the Academy Center of the Arts, signs an insurance policy on the package containing magician Mike Super's prediction at Bank of the James in Lynchburg on December 13, 2019. The policy insures no one will open the envelope prior to the event on Jan. 24.

Wendy Webster, financial services representative with Bank of the James, opens a safety deposit box for the envelope at Bank of the James in Lynchburg on December 13, 2019. Two keys are required for each box, one will stay with someone at the Academy and the other at the bank.

Vinnie Santini and Shan Ingram, BWXT police officers, walk the sealed envelope to Bank of the James on Main Street in Lynchburg on December 13, 2019.

Mike Super’s upcoming performance in Lynchburg is more than a week away, but the magician already is feeling anxious about it, thanks to a grand finale he equates to “playing Russian roulette over and over again.”

That trick will find him revealing a prediction he made for a headline that will appear in The News & Advance on the day of the show, Friday, Jan. 24.

Super wrote down the prediction and mailed it to Lynchburg at the end of November, in a sealed envelope that has been stored in a safety deposit box inside the vault at the Bank of the James ever since it arrived in early December.

Staffers at the Academy Center of the Arts, which is hosting the show in the historic Academy of Music Theatre, had the envelope hand-delivered to the bank by BWXT’s security force and have insured no one will open the envelope prior to the event through a policy filed with Campbell Insurance, according to Brittany Griffith, the Academy’s director of communications and marketing.

If Super’s prediction is correct, the audience will be wowed. If he gets it wrong, he’ll reimburse them for the price of their tickets.

He’s done the trick before, he says, and never gotten it wrong.

“People think, ‘Well, he’s done it before successfully, so it must always work out that way, or the odds are good,’” says Super, who was a finalist on season nine of NBC’s “America’s Got Talent” in 2014. “The hard thing about doing this, and I don’t know how many more I’ll do, is the more you do it, the more likely you are to have it go wrong. The odds only keep getting worse.”

“The advantage I have is I get to pick which shows I’m going to do it for,” he adds, without offering up any hints about what the actual prediction was this time around. “A lot of it also is based off of news cycles. But the hard thing is anything can happen any day, and it could have nothing to do with the current news trends and cycles. That’s sort of the X factor, shall we say.”

Super says he also will be debuting some new magic during his Lynchburg show, as well as doing some old favorites he performed during “America’s Got Talent” (AGT).

That includes an appearance, shall we say, by his imaginary friend, Desmond, who often offers an assist with his tricks; on “AGT,” he introduced Desmond with a piece that channeled his energy into breaking a glass pitcher held by judge Heidi Klum.

Super — who counts both David Copperfield and Jerry Seinfeld among his influences — is known for infusing his family-friendly shows with humor and audience interaction.

“When you’re a magician, my instrument is the magic trick but if that’s all it is, you know, it’s like watching someone great at an instrument but having no other meaning associated with it. … It doesn’t touch a person, which is what I think strikes relationships with people.”

“I don’t like to call myself a mentalist or only an illusionist or only a magician,” he adds, “because I like to pull all of those things into a show. Comedy disarms people and it makes them relate to you.”

Finding common ground, whether it’s trying to predict PowerBall numbers or performing a more sentimental piece that pays tribute to his mother, is what it’s all about.

“I try to go, ‘What do we all have in common?’ .. Everybody has that person that has passed away that meant something to them. If you start a trick there, I can take the emotion further than if I was starting from square one,” he says. “The same with Desmond. Desmond came about because I wanted people to be unsure whether or not this was true. We’ve all woken up at 3 in the morning, freaked out for no reason and for whatever reason you know there’s no monster under your bed, but you don’t necessarily want to let your foot dangle down there … and Desmond sort of taps into that.”

Super first fell in love with magic while visiting Disney World with his family at age 6. From there, he started holding weekly shows in his backyard, wearing a Dracula cape from Halloween and charging a nickel per person, he writes on his website.

Prior to appearing on “America’s Got Talent,” he won NBC’s magic competition series “Phenomenon,” which aired in 2007 and was judged by illusionists Criss Angel and Uri Geller.

Super says he likes to add new tricks to his repertoire to keep things fresh and has a notebook where he keeps all his ideas — “a lot like a comic who writes down jokes. Comedians and magicians, a lot of the process can be the same.”

He’ll sometimes practice new sleight-of-hand tricks with his daughters, who are 10 and 6 years old. Other times, he has to debut something new on the fly.

“There’s been times where in the show, they’ve had problems backstage moving props or something breaks,” Super says. “They’re secretly telling me, ‘Hey, we need 10 minutes.’ So I’ll pull out something I’ve wanted to try.”

In one such instance, he tried a new voodoo trick during which he takes control of someone’s body.

“I didn’t think it would go over as well as it did,” says Super, who later would perform the trick on “America's Got Talent,” with judge Mel B. “I can’t take it out of the show now.”

"It really is an organic, ever-changing thing," he adds.

When brainstorming new tricks, Super always asks himself one question: Why would anyone care about this?

An audience, he explains, might be halfway interested if he's trying to escape from a straitjacket onstage. The more elements he adds, the more engaged they will become — is he hanging over spikes, perhaps, or a tank of water?

"Now they might see a person die, and they believe that is actually possibly going to happen, then they're captivated even more," he theorizes.

But what if he collected audience members' cellphones, and getting them back depended on him escaping?

Suddenly, he predicts, they'd be riveted: “It’s the exact same trick, but they care a whole lot more because they’re invested somehow.”

Mark your calendars: The Burg picks its most anticipated 2020 events

Last week, former Burg reporter Emma Schkloven and I shared some of the 2020 events we’re mo…