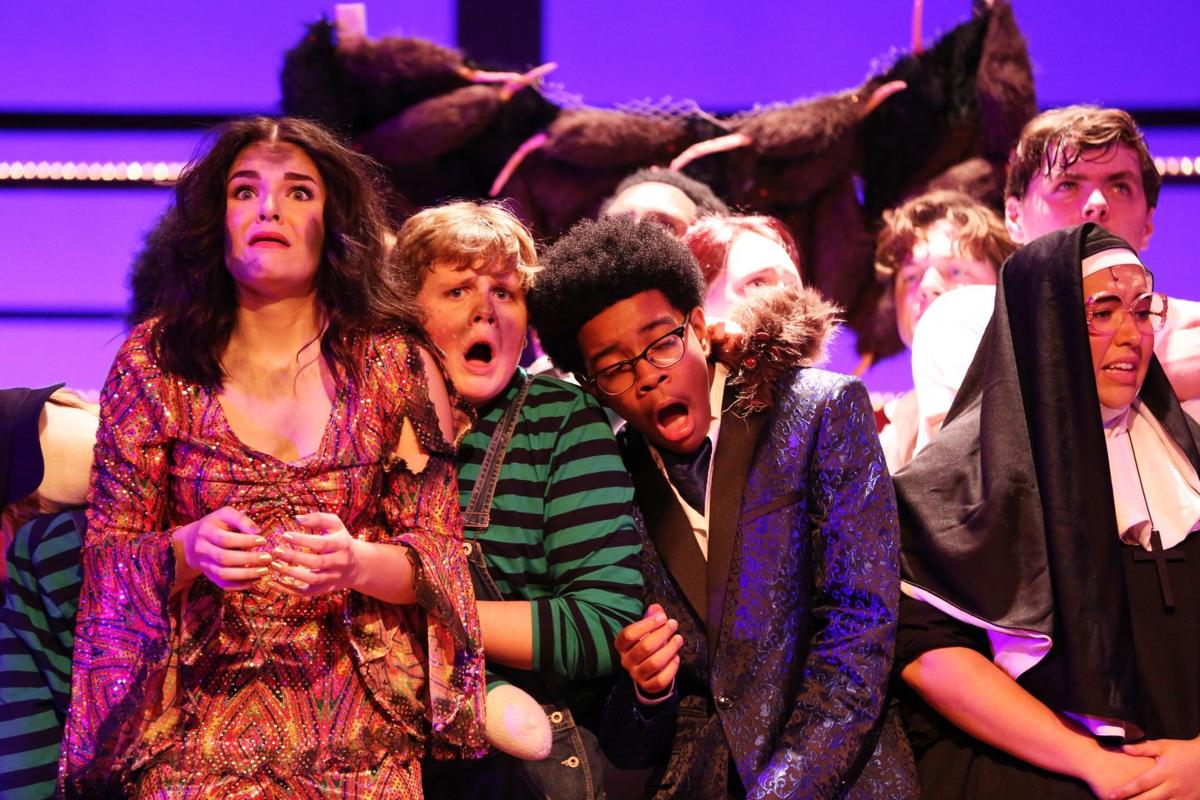 The characters in "Disaster!" weather earthquakes, tidal waves and infernos in the musical, which spoofs 1970s disaster movies. 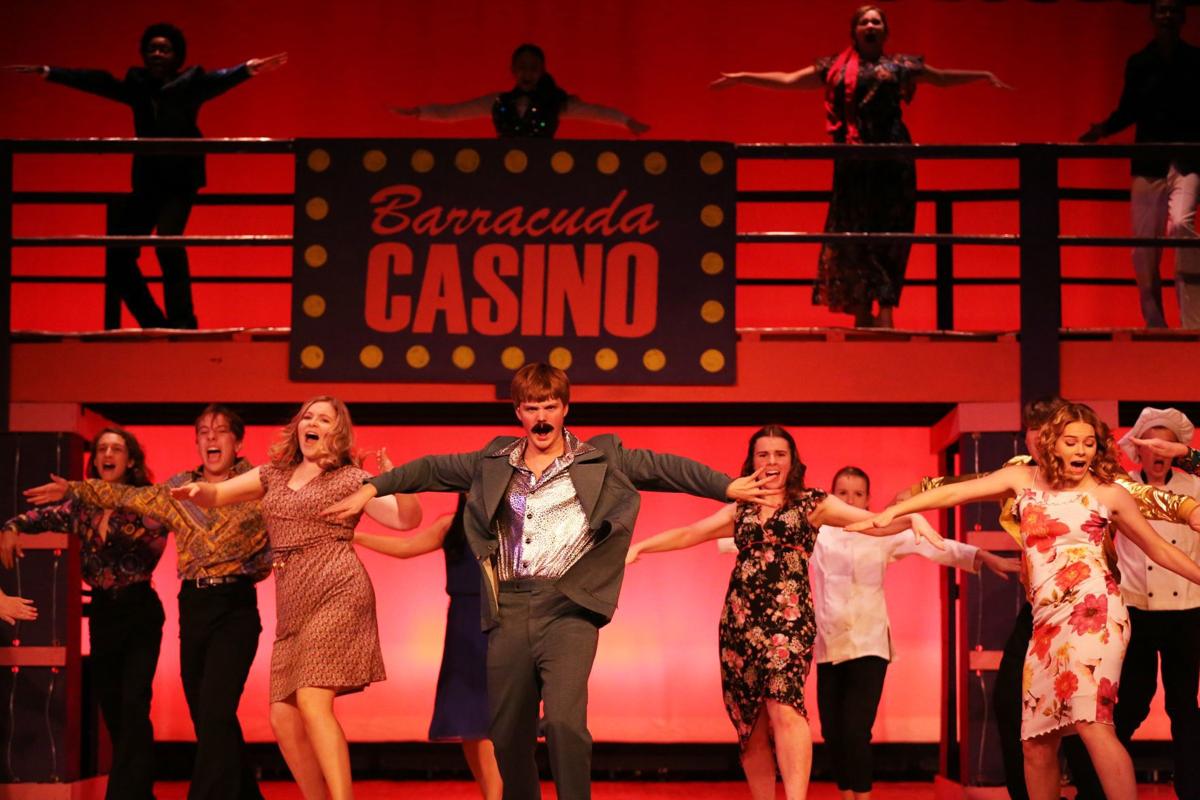 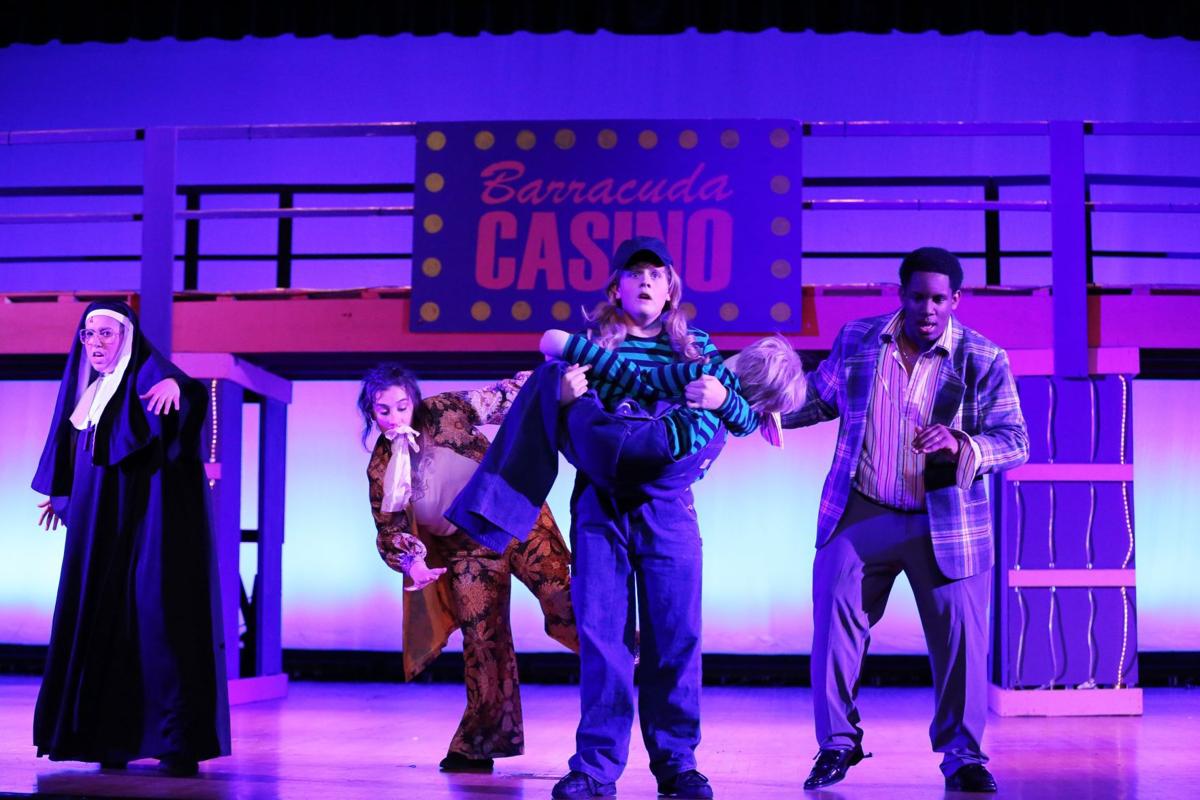 The characters in "Disaster!" weather earthquakes, tidal waves and infernos in the musical, which spoofs 1970s disaster movies.

In the opening moments of Jefferson Forest High School’s production of “Disaster! A ’70s Disaster Movie ... Musical,” a man is trying to put some finishing touches on a floating casino before opening night but can’t seem to complete his duties because of, well, something.

The ground keeps shaking, preventing him from screwing in several loose bolts high on the ship and, “it ain’t the West Side Highway,” he tells someone on the other end of his walkie-talkie.

The ship is booked beyond capacity, we soon learn, and safety precautions have not been a priority for its shady owner, Tony — setting the stage for a storyline straight out of the 1970s disaster movies the musical spoofs.

“Starring a rotating troupe of movie stars just starting to go a bit brown around the edges like old fruit, the films saw boats sink, airplanes crash, skyscrapers tumble, epidemics break out and … ahem … some bees, but aside from their interchangeable casts, they also shared an ethos,” according to IndieWire’s 2015 list of the 10 Defining 1970s Disaster Movies.

“Usually employing cross cutting between the blithe ‘before’ moments (picnics, romantic trysts, parades, instrument-strumming nuns/hippies/hare krishnas) and the fateful bomb on the tracks/crack in the dam/shivering stowaway sneezing onto food, they were marked by bloated spectacle, staggering disregard for human life and a barely-there approach to creating characters you actually gave a damn about.”

In “Disaster!,” guests of the floating casino must weather not just an earthquake but also a tidal wave and fire, among other catastrophes, all in the same night, with a soundtrack of 1970s songs guiding them along the way.

“It follows the central story of the earthquake and all the people who meet and survive the night together,” says senior McKenna-Kate Gaudio, who plays casino lounge singer Jackie.

The musical, which had a short run on Broadway in 2016, takes its inspiration from three movies in particular, says Spence White, director of JF’s Cavalier Theatre: 1972’s “The Poseidon Adventure” and 1974’s “The Towering Inferno” and “Earthquake.”

Those movies and others like them “play like comedies today,” White says, especially when compared to current big budget, effects laden films.

It’s something the script embraces.

“It’s probably the most aggressively silly show we’ve ever done,” he says. “… It’s willing to go to such great lengths to justify a song.”

The show opens with Donna Summer’s “Hot Stuff” as the characters are introduced. The lyrics apply to both Chad, who invites himself along to the ship’s opening night hoping to meet some ladies, and Ted, a disaster expert with some ominous warnings about the boat and its proximity to a fault line (the geological samples he’s taken, you see, also are “hot stuff”).

Jackie’s first big number is the Bay City Rollers’ “Saturday Night” — with it’s opening refrain of “S-A-T-U-R-D-A-Y night!” — and, at another point, a long-married couple profess their love for each other with Orleans’ “Still the One” (“We’ve been together since way back when ...”).

Later, a nun protesting the “floating den of sin” hilariously sings about her passion for both God and gambling in “Torn Between Two Lovers” (“Torn between two lovers, feelin’ like a fool/Lovin’ both of you is breakin’ all the rules), and “Knock on Wood” plays a key role right before disaster strikes.

The 1970s references also come fast and furious — some students were familiar with, like the popularity of the soft drink Fresca, while White had to pause rehearsals to explain others, like who exactly Horshack is (that would be a character on the sitcom “Welcome Back, Kotter,” which starred a very young John Travolta).

Everything about the musical is over-the-top and campy.

“It’s so ridiculous, you just kind of have to go along with it,” says senior Kamy Satterfield, who plays Shirley, a woman dealing with an unnamed disease that comes with a series of comical side effects.

“It’s intentionally low-tech, and that’s where the comedy is,” White says, referencing, among other elements, two shark puppets that play a pivotal role later in the show. “… It says in the script that the cheaper the effect, the better it is.”

And yet it’s still the most tech-heavy show they’ve done.

“You still have to produce earthquakes and tidal waves,” he says, standing not far from where pieces of foam rubble are suspended from the ceiling in anticipation of their eventual crash landing on the stage when the earthquake hits.

White and his students installed a mini fly system in order to make that happen.

“It’s really been fun to work all that out,” Satterfield says, “[and] how we’re going to make it all fall apart.”

When: 7 p.m. Wednesday, Thursday and Saturday and 3 p.m. Sunday

Tickets: $12 for adults and $8 for students and seniors