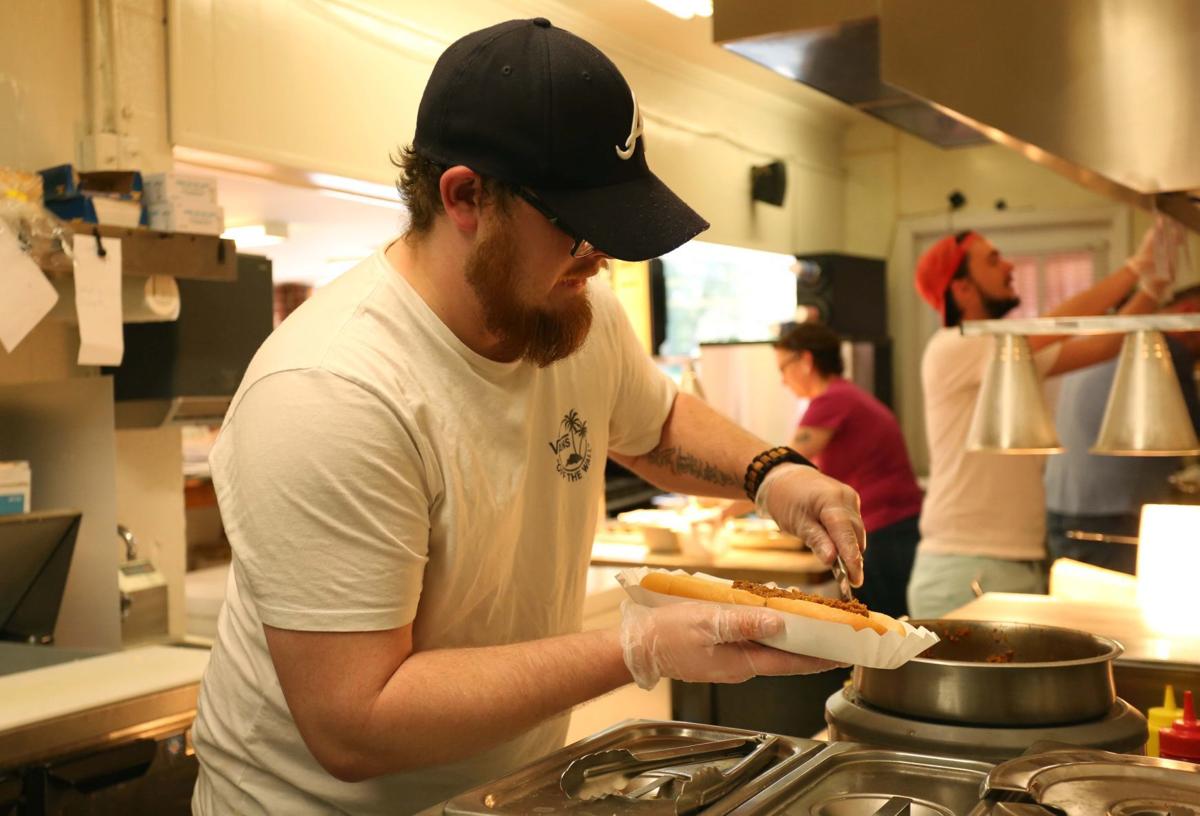 Jessie Dempsey, an employee, puts chili on a hot dog at Rainbow Drive-In in Bedford, Virginia, on Friday, April 3, 2020. 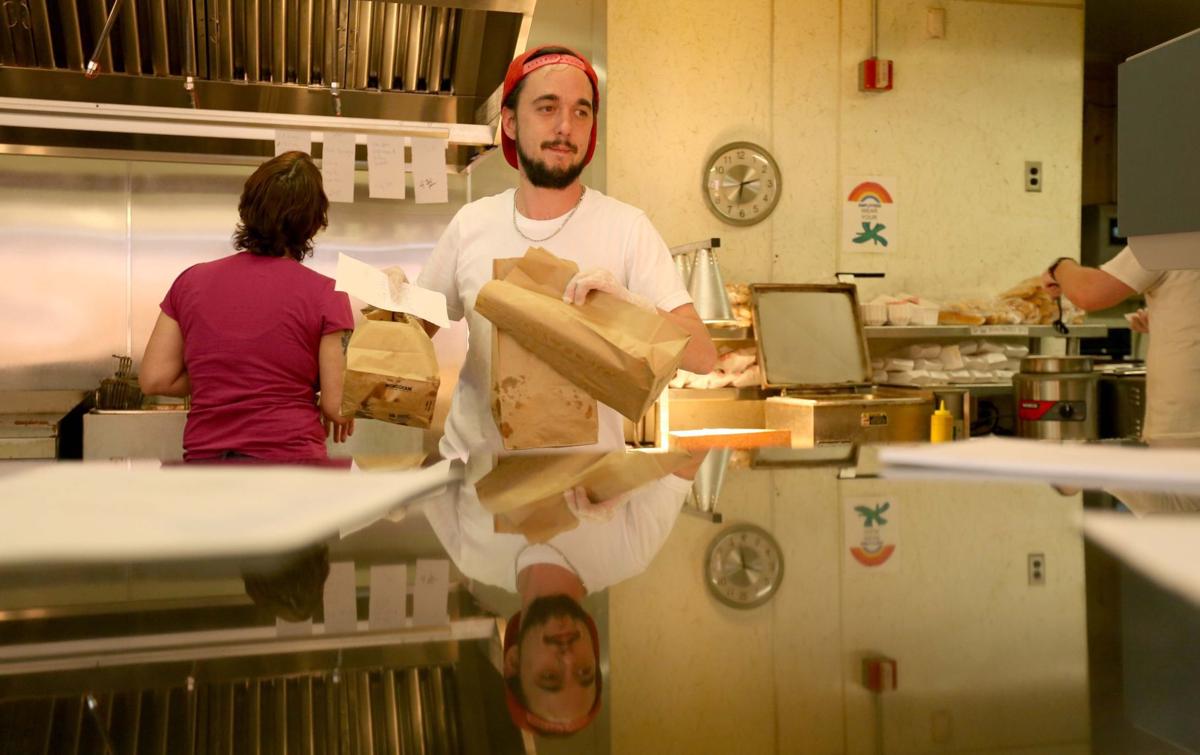 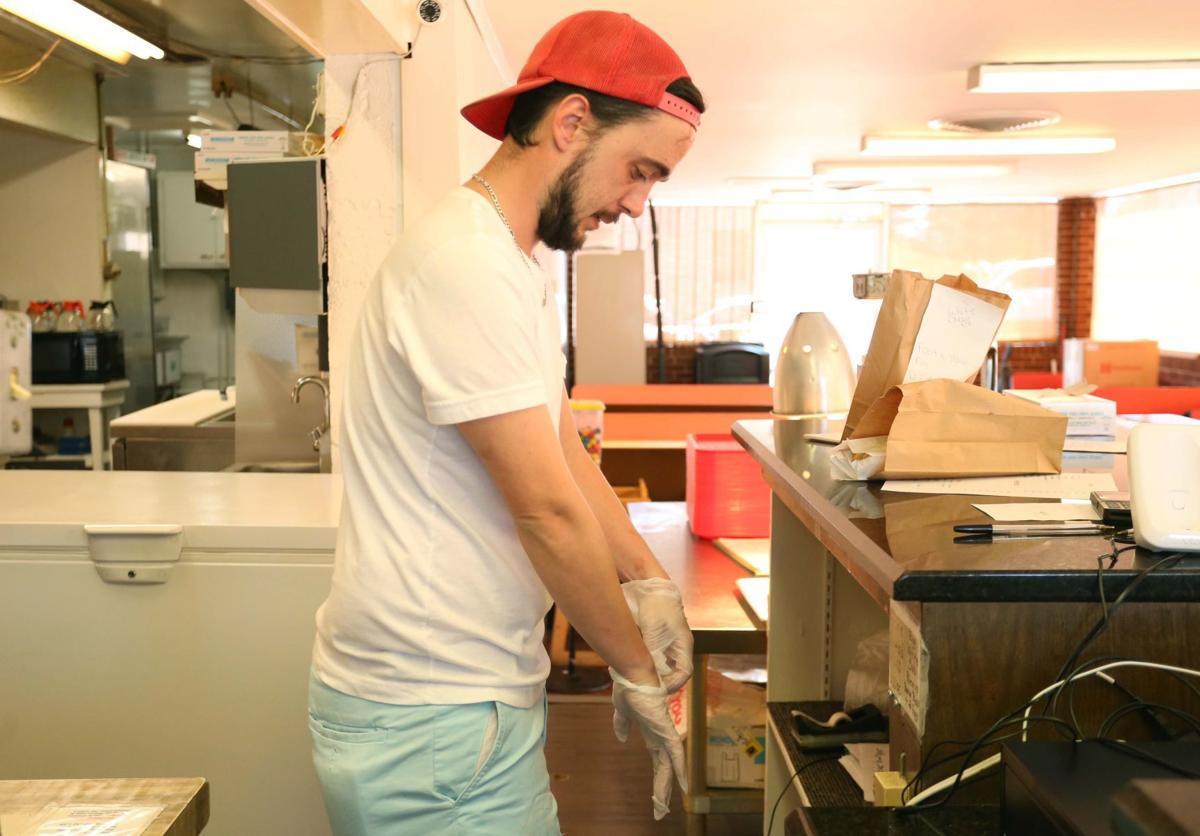 Jonathan McKinney, a manager, puts on gloves at Rainbow Drive-In in Bedford, Virginia, on Friday, April 3, 2020. 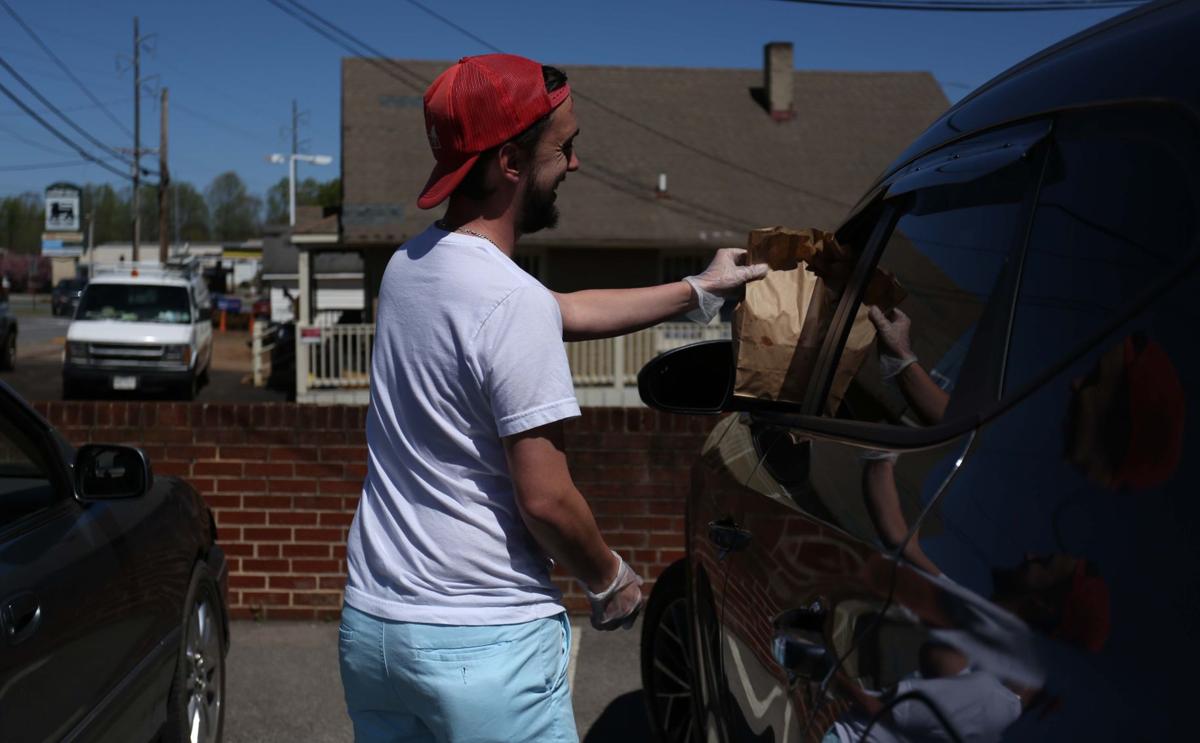 Jonathan McKinney, a manager, delivers food to a customer at Rainbow Drive-In in Bedford, Virginia, on Friday, April 3, 2020. 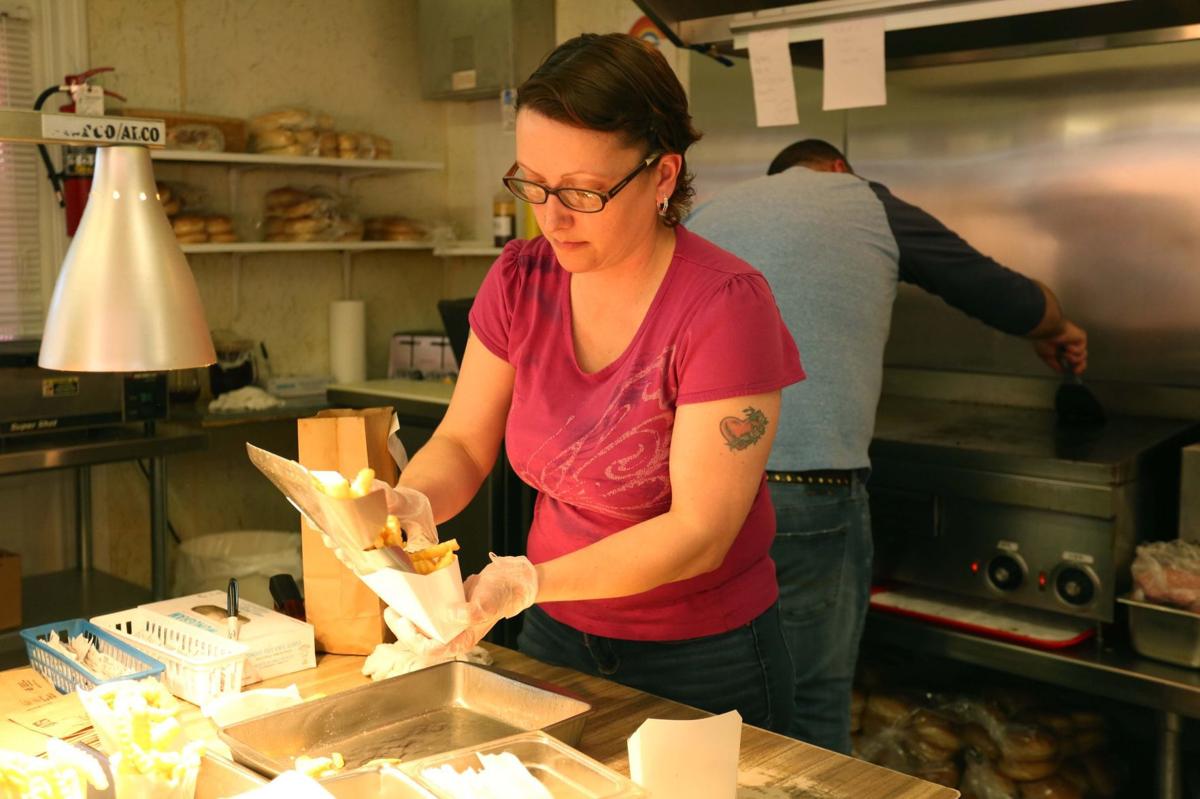 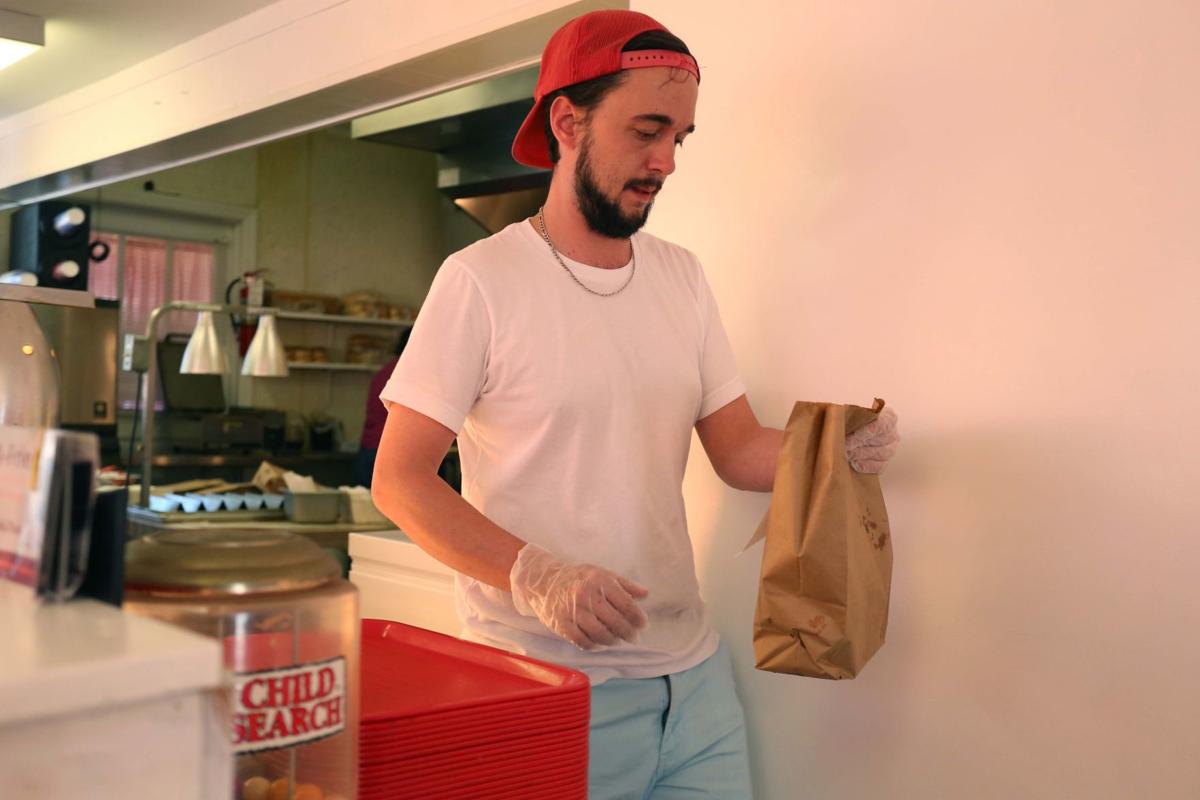 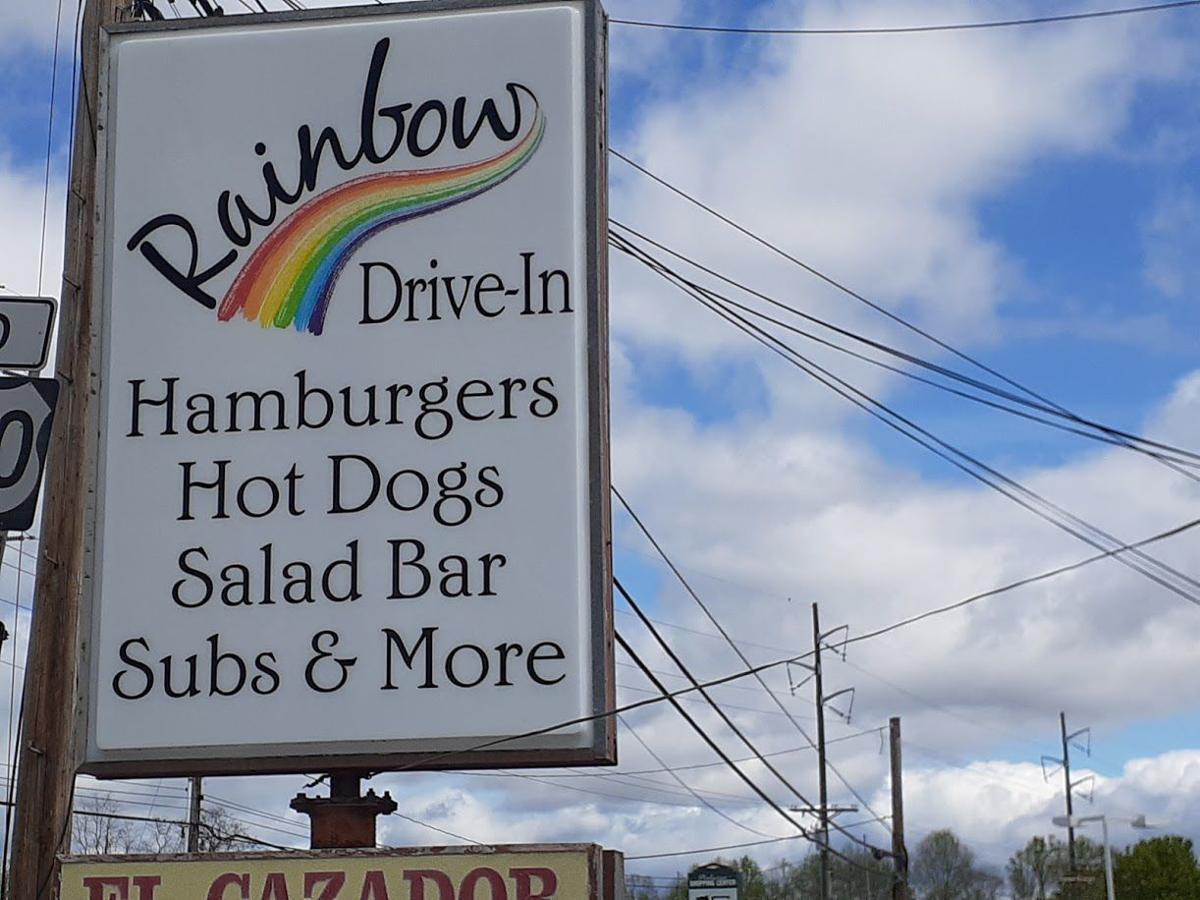 The Rainbow Drive-In re-opened in Bedford, Virginia, after closing nearly two years ago. In spite of the coronavirus pandemic, business has been booming. 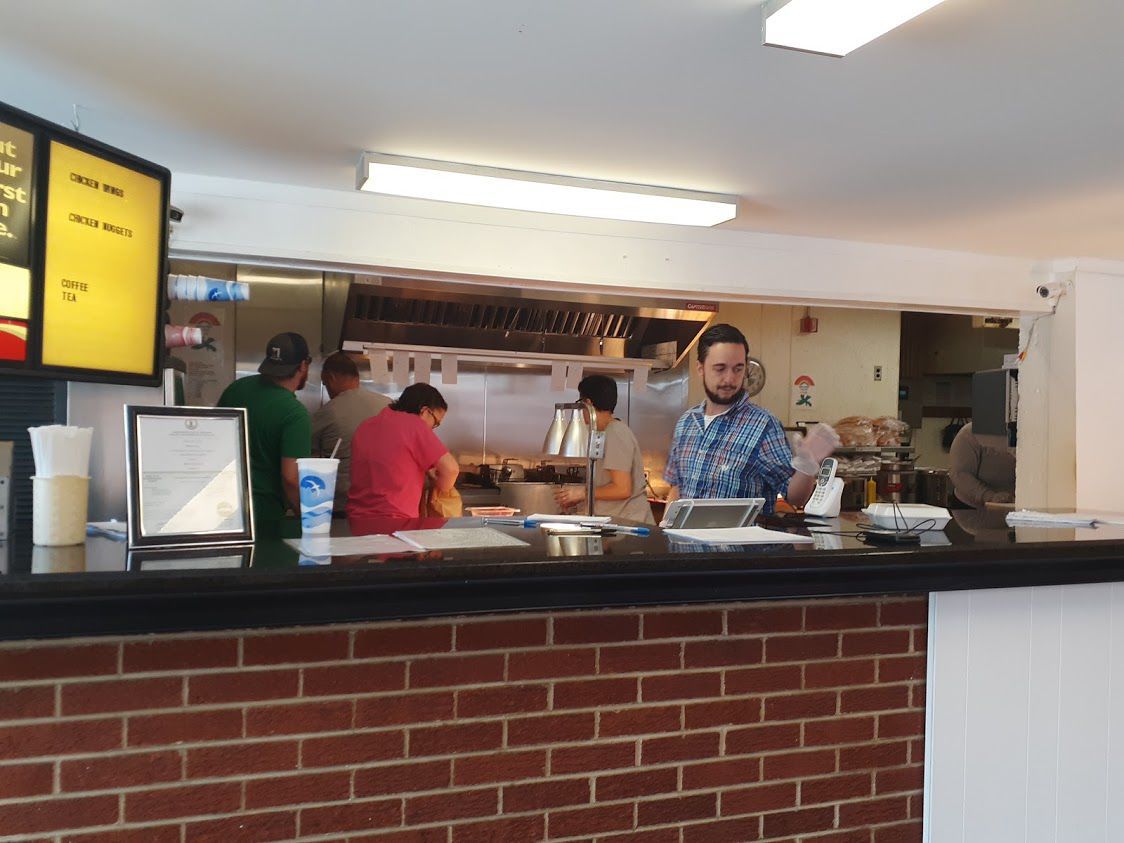 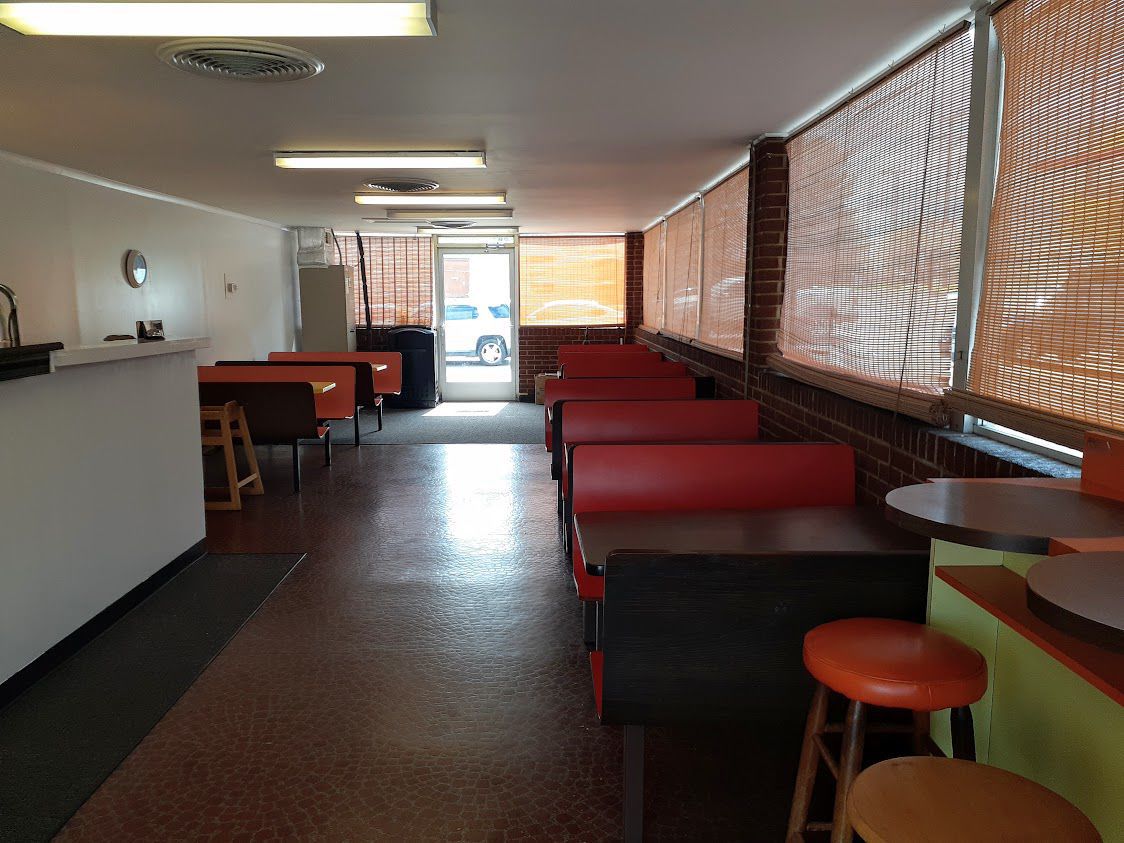 The Rainbow Drive-In in Bedford, now taking call-in orders with curbside pickup, is ready to invite customers inside again once restrictions related to the coronavirus pandemic are lifted. While the lobby was empty on Wednesday, April 1, 2020, customers drove up to retrieve their orders outside.

Jessie Dempsey, an employee, puts chili on a hot dog at Rainbow Drive-In in Bedford, Virginia, on Friday, April 3, 2020.

Jonathan McKinney, a manager, puts on gloves at Rainbow Drive-In in Bedford, Virginia, on Friday, April 3, 2020.

Jonathan McKinney, a manager, delivers food to a customer at Rainbow Drive-In in Bedford, Virginia, on Friday, April 3, 2020.

The Rainbow Drive-In re-opened in Bedford, Virginia, after closing nearly two years ago. In spite of the coronavirus pandemic, business has been booming.

The Rainbow Drive-In in Bedford, now taking call-in orders with curbside pickup, is ready to invite customers inside again once restrictions related to the coronavirus pandemic are lifted. While the lobby was empty on Wednesday, April 1, 2020, customers drove up to retrieve their orders outside.

After its closure nearly two years ago, a beloved Bedford restaurant has re-opened for business.

Now, people are flocking to the Rainbow, at 1504 Longwood Avenue, once again. The opening comes at an odd time, when restaurants are struggling because they cannot offer traditional sit-down meals due to the coronavirus pandemic. But the Rainbow is thriving by offering call-in orders and curbside pickup.

Jonathan and his wife, Carlee McKinney, have run the Rainbow Drive-in’s neighboring Dairy Queen — a walk-up joint open between April and October that serves ice cream only — for the last five years, but this is their first time taking on the Rainbow, where they both worked as teenagers. Both the Rainbow Drive-In and the Dairy Queen are owned by the DeSimone family, now a trust among the five DeSimone siblings.

“My grandfather opened the businesses because he always wanted his family to have a place to work. And it has been through everyone in the family,” Carlee, the daughter of one of DeSimone’s five children, said. “He opened them so his children and grandchildren would be able to work there, and we are hoping to continue that legacy so our children can work there.”

When Cheryl Bush felt ready to step down from operating the drive-in, the owners had hoped to keep things going by switching management. A property dispute with the owner of a neighboring lot dragged out the process, however, resulting in a longer break in business than anticipated, according to Corinne Richards, trustee and co-owner.

Although the family had not planned on closing the drive-in altogether, they are glad to be re-opening after overcoming a few hurdles. The re-opening did not come without a cost. During the period of closure, some health code changes were implemented that resulted in required upgrades that Jonathan estimates totaled at least “a couple thousand dollars.”

“We had a health inspection. He came, and he said, ‘Things have changed since you closed the doors,’” Jonathan said of the initial inspection. “We had to do a handful of upgrades in the kitchen, but of course we got it all taken care of and got it rolling.”

After replacing the sink to have rounded edges, getting a new hood system for a new oven, adding extra light fixtures in various places throughout the building, installing an extra hand-washing sink and adding a grease trap, the Rainbow Drive-In passed inspection and was ready for business, Jonathan said.

In spite of the coronavirus pandemic that has harmed or challenged many food establishments, the Rainbow Drive-In has been getting almost more business than it can handle, Jonathan and Carlee said. Because the pandemic resulted in closure of eat-in options at diners and restaurants, the Rainbow Drive-In dove into something it had never done before: taking call-in orders only, with curbside pick-up.

“With everything going on, we can’t have anybody in the lobby, which we thought that was really going to hurt us,” Jonathan said. “We are not lacking at all. I feel blessed to be able to say that, especially because so many places are closing or struggling to even pay the bills, and we are just doing outrageous business. I couldn’t be more blessed with it.”

In fact, Jonathan and Carlee said, the restaurant’s phone is ringing off the hook from the second they open till after closing time every day, so far.

“I tell people that it’s like winning a radio contest to get in right now. It’s overwhelming, but it’s awesome,” Jonathan said.

The staff take and fill as many orders each day as they are able to handle, and although there are plenty of customers unable to get through the busy phone line, Jonathan said the patrons are extremely patient and willing to keep trying until they manage to get an order in.

The drive-in currently is open from 11 a.m. till 5 p.m. Tuesday through Sunday each week.

“People are lining up. They’d like to get their food a little sooner, but they don’t care,” Richards said. “They’re just sitting there waiting, because they’ve waited so long to get their pizza burger; to get their footlong hot dogs; to get the things that they remember, some of them from childhood.”

“We’ve been waiting almost two years to re-open, and we’re re-opening under very crazy circumstances,” Carlee added. “We can’t complain at all. We have been so thankful, because a lot of places are having to close. We’re just thankful that we’re able to re-open, and people actually are supporting us.”

With many employees facing layoffs and furloughs as a result of the coronavirus pandemic’s economic impact, Jonathan and Carlee also are glad to have been able to hire five new employees to work at the Rainbow Drive-In.

Rainbow Drive-In features a familiar menu, offering customers the same hot dogs, cheeseburgers, chili and other favorites many in the community have loved for decades.

“Nothing has changed. If you ordered a hot dog, chili, a cheeseburger five years ago, you’re getting the same thing today,” Jonathan said.

Richards said Cathy Johnson, a woman working at the business office where she applied for a business license to operate Rainbow Drive-In again, was reminiscing on her meals at the restaurant growing up.

“She said, ‘You know, I was just a child when my dad would take me to the Rainbow,’” Richards said, recalling Johnson’s words. “This goes way, way back.”

Jonathan said he is grateful to be working with a few employees who worked at the Rainbow Drive-In for many years so they can help guide him as he learns the ropes.

“It’s been a fun adventure. Every day holds something new, being able to learn everything the way that it’s been done here for so many years. I wouldn’t change it. It’s just been a fun roller coaster ride,” he said.

In addition to the new call-in order and curbside pickup, Rainbow Drive-In is accepting credit and debit cards for the first time.

Jonathan and Carlee have plans for the drive-in once social restrictions are lifted and the pandemic has settled down.

“Once the governor says that we are able to open up the dining area, it will be back full service,” Jonathan said. “We’ll have our front dining, and we have what we call in the back, the ‘Roma Room.’ That will be back full blast, where we have a waitress again, and have the restaurant filled up with patrons. We’ll have our salad bar again. From there, it’s just seeing what it brings us. Seeing what upgrades we can do; how we can make things more exciting and fun for everybody while still keeping that same family vibe that everyone has for the restaurant that it had for so many decades.”

Call-in orders and curbside pickup services probably will remain an option as well, he added.

“People are going to get used to it, so it’s really going to be a service that we probably will have to keep offering. It does help especially elderly customers, or disabled customers,” he said.

“We have had so many customers that have supported us so much. It’s been great. We are just so thankful,” Carlee said.