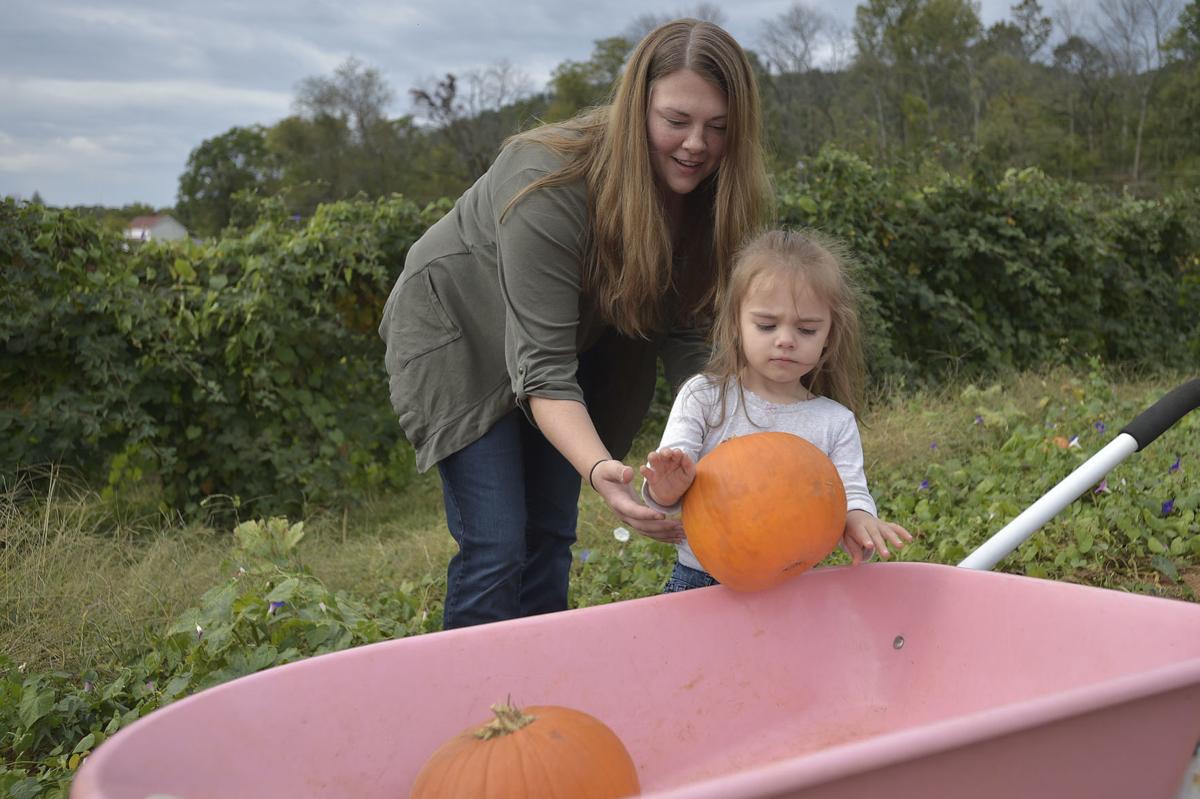 Ashley Thulin, left, of Lynchburg, helps her daughter Evangaline Thuilin, 2, puts a pumpkin in a wheelbarrow at Morris Orchard in Monroe on October 12, 2019. 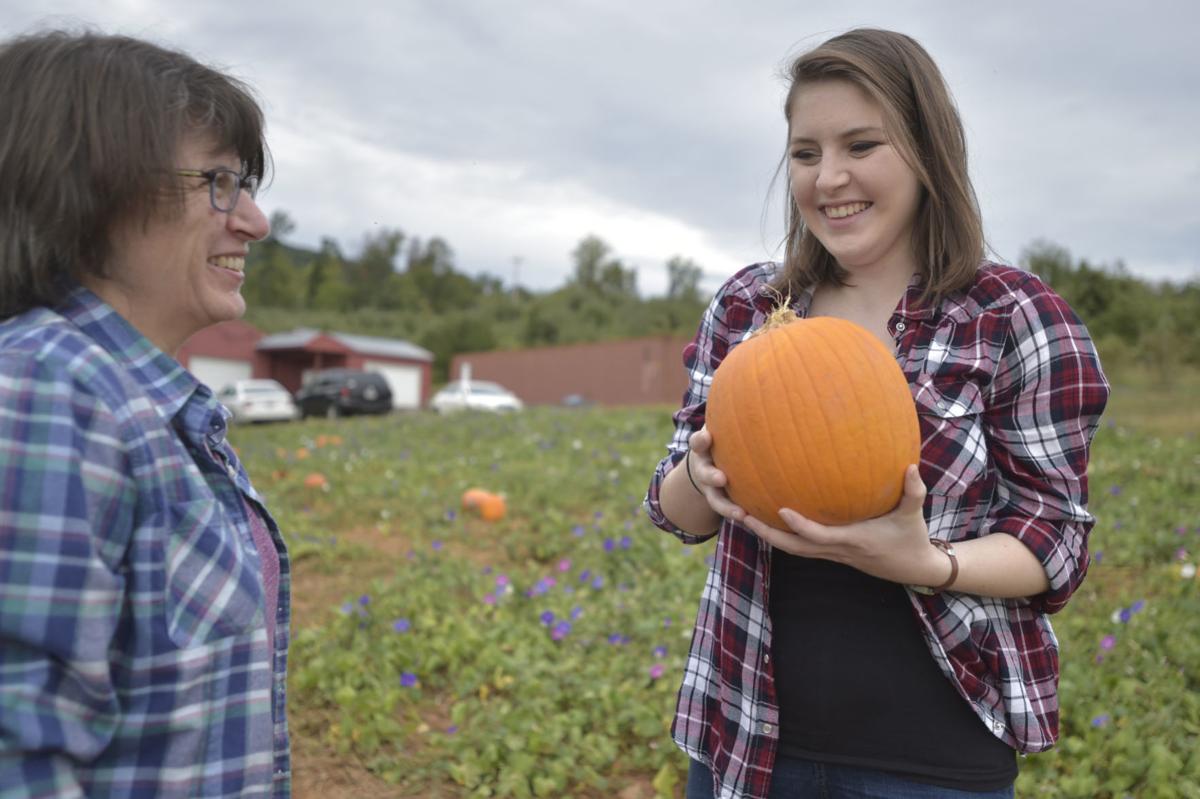 Sue Eick, looks on as Annie Eick holds a pumpkin at Morris Orchard in Monroe on October 12, 2019. 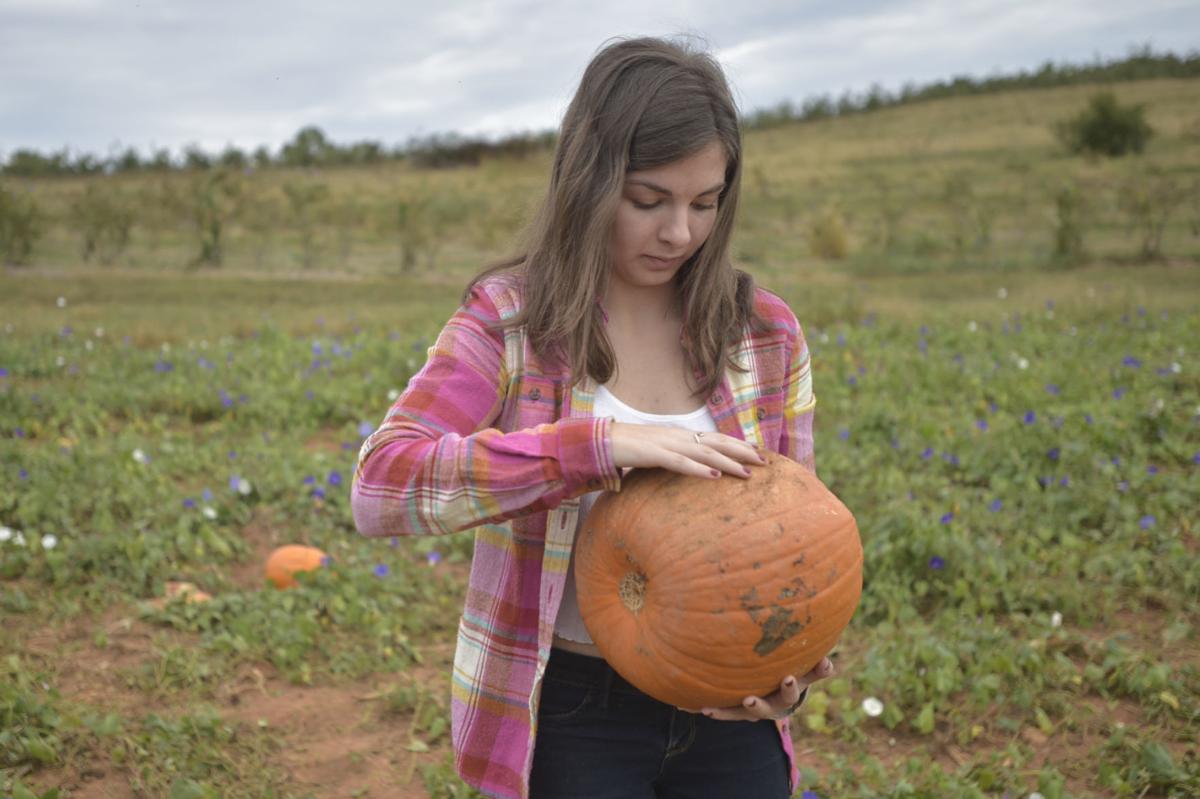 Leah Eick brushes dirt off of a pumpkin at Morris Orchard in Monroe on October 12, 2019. 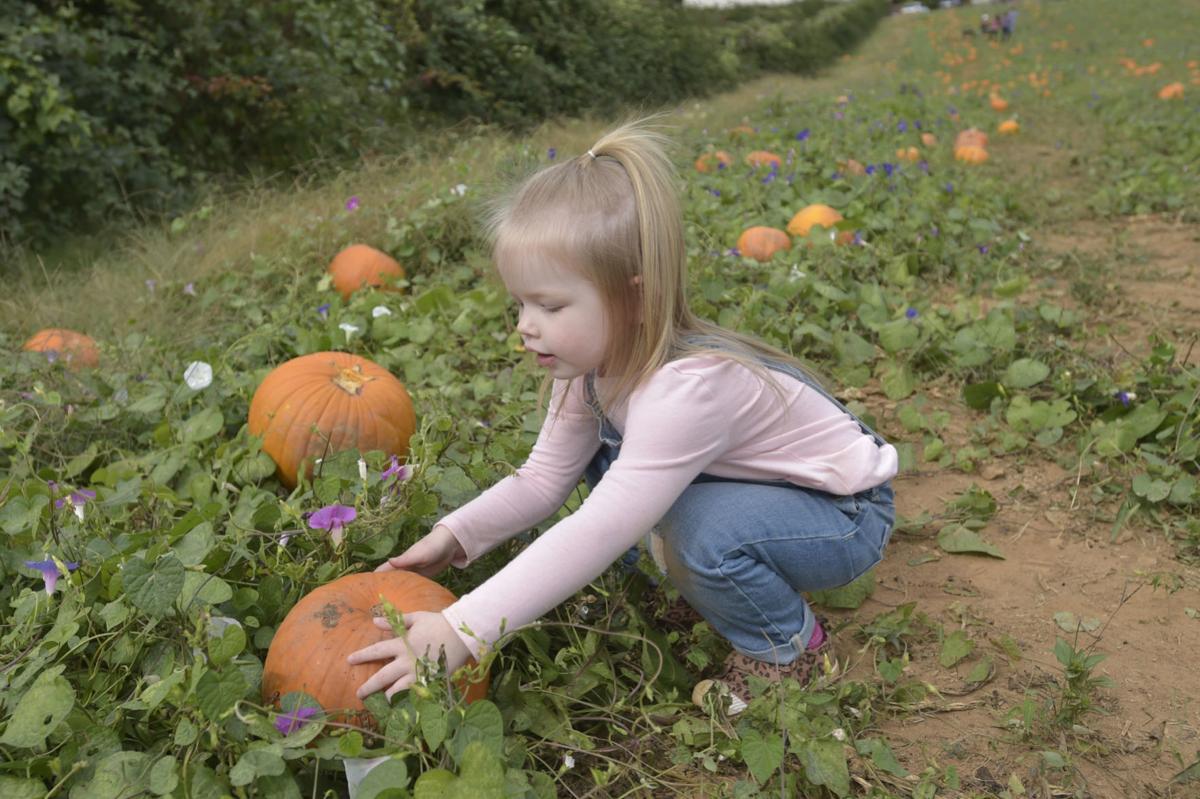 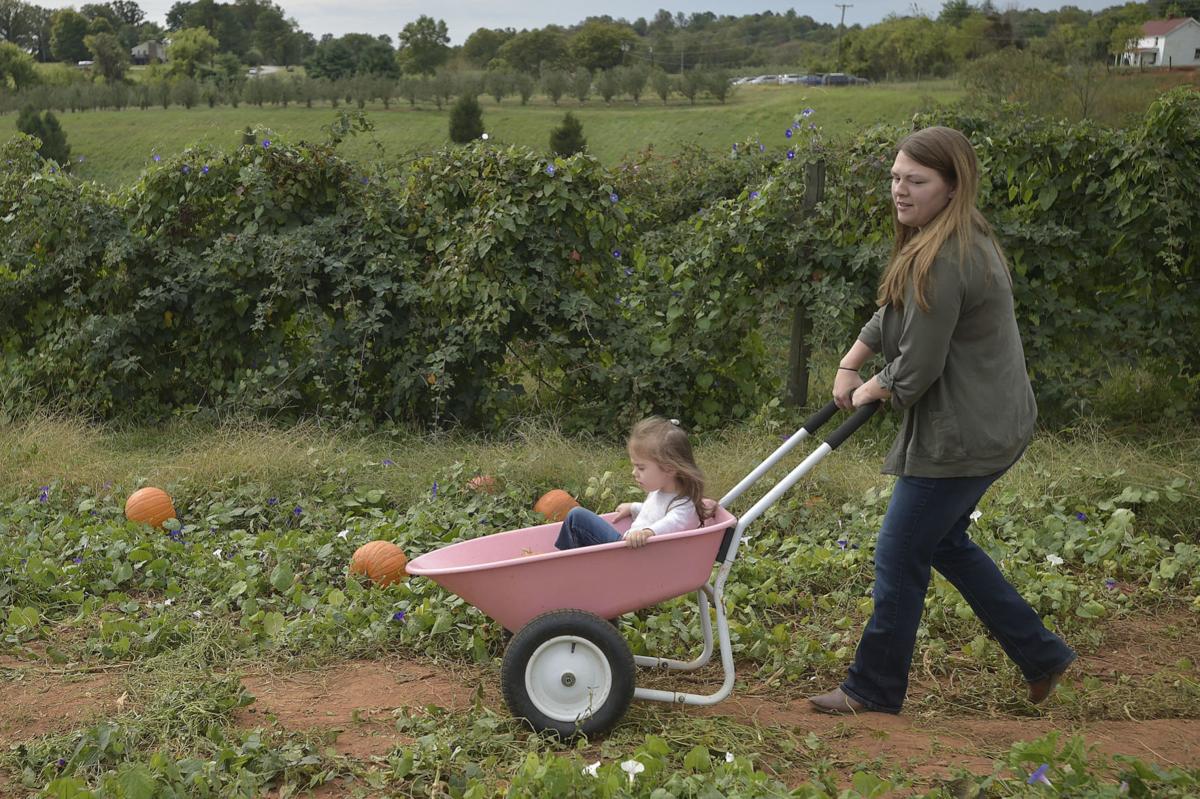 Ashley Thulin, of Lynchburg, pushes her daughter Evangaline Thuilin, 2, in a wheelbarrow at Morris Orchard in Monroe on October 12, 2019. 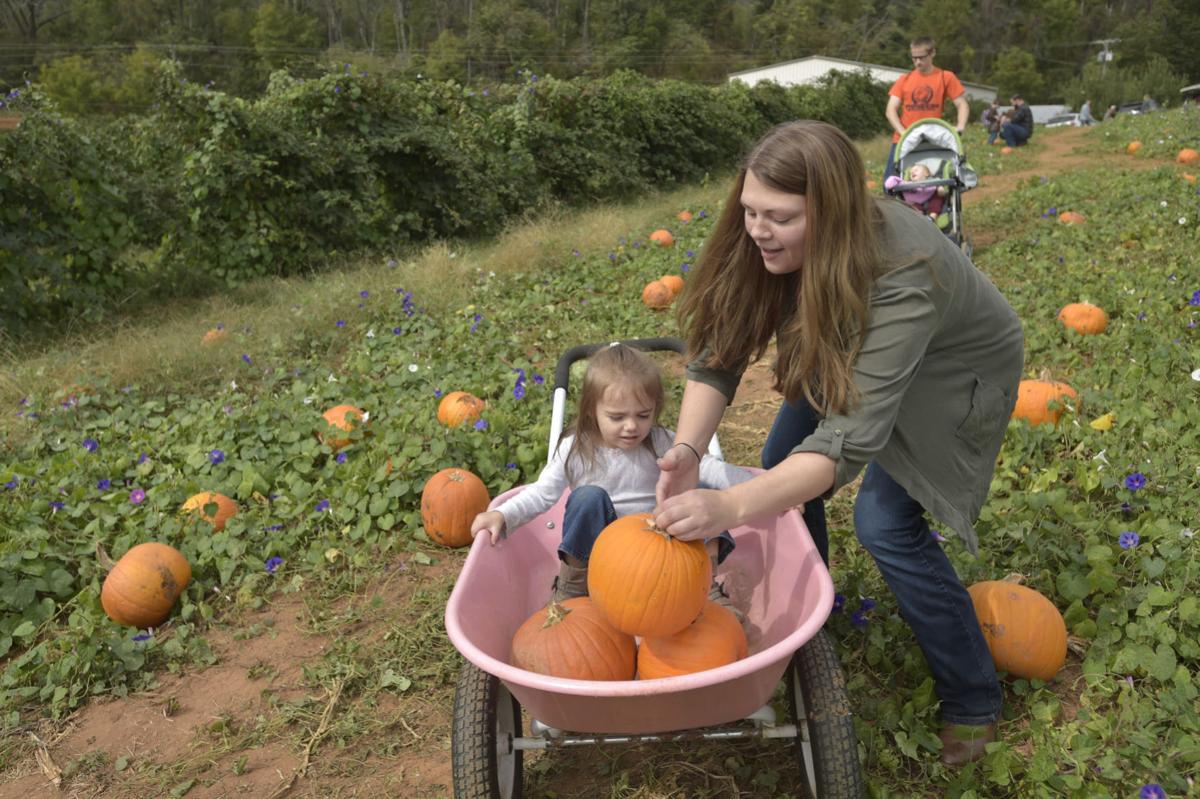 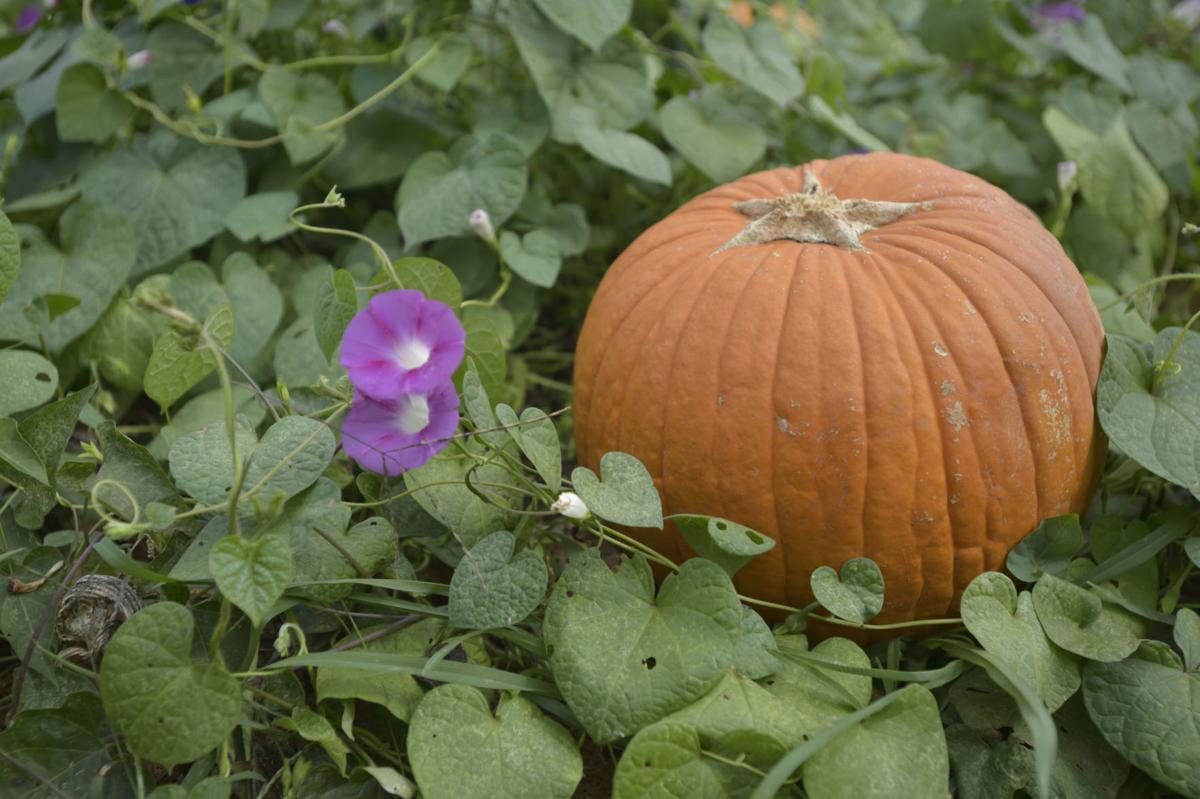 Ashley Thulin, left, of Lynchburg, helps her daughter Evangaline Thuilin, 2, puts a pumpkin in a wheelbarrow at Morris Orchard in Monroe on October 12, 2019.

Sue Eick, looks on as Annie Eick holds a pumpkin at Morris Orchard in Monroe on October 12, 2019.

Leah Eick brushes dirt off of a pumpkin at Morris Orchard in Monroe on October 12, 2019.

Ashley Thulin, of Lynchburg, pushes her daughter Evangaline Thuilin, 2, in a wheelbarrow at Morris Orchard in Monroe on October 12, 2019.

As Central Virginia rolls into its third week of October, many families are heading out to get their seasonal pumpkin ... or two or three.

Pumpkins are such a popular item in the fall they appeared in the list of the state’s top 20 agricultural products for the first time this year, landing at number 20 behind potatoes.

Pumpkins sold at pick-your-own farms, as well as wholesale pumpkins — bought by stores to turn around and sell — are included in the $10 million in farm cash receipts, said Elaine Lidholm, spokeswoman for the Virginia Department of Agriculture and Consumer Services.

Lowell Yoder, co-owner of Yoders farm in Rustburg, said he has a nice pumpkin crop this year, although it isn’t exceptional.

The farm plants about four acres of pumpkins, but only some of the fields are irrigated and get more water than others — signs of a great batch.

“We try to diversify as much as possible,” Yoder said. “And we incorporate that into pumpkin planting. We try to plant different varieties, and some years, some pumpkins do better than others depending on weather. So we have our bases covered.”

The challenge with this season’s hot weather is pumpkins won’t keep as long, Yoder said, and they will begin to sunburn. And if a pumpkin get too much sun, it will perish and rot.

Yoder said customers enjoy picking from a lot of different types of pumpkins — Yoders has about 50 varieties — which makes for a better farm experience.

Go to a grocery store, and you’ll see a typical variety of apples with names such as Red Delicious, Gala, Honeycrisp or Fuji. Pumpkins come in different varieties as well. Yoders Farm features not only the fan-favorite Jack-O-Lantern type, but also Gladiator, Orange Sunrise, Kratos and specialty pumpkins such as Cinderella, whose color leans more toward a vibrant red-orange than plain orange, or Jarrahdale, known for its blue-gray hue.

The farm has grown and sold pick-your-own pumpkins for a decade now and recently Yoder has found sales have increased.

“Seems like in the last five years, especially, people are using them for fall decorating,” he said.

Scott Barnes, owner of Morris Orchard in Monroe, said the pumpkins received plenty of rain until about the middle of August, which he said was a good thing because he didn’t want his pumpkins getting too much water.

“You don’t want a lot of rain on a pumpkin that’s maturing and getting orange,” he said. “The sun and dry weather help to toughen the skin.”

Though 5% to 10% of pumpkins were lost to the dry and hot weather, he said most came through healthy. The hotter-than-usual weather in September caused some sunburn issues in the pumpkins, which he said basically cooks them.

“We always allow for situations like that so we grow more than we need,” he said. “It’s just Mother Nature one way or the other every year. There’s no such thing as a perfect patch of pumpkins.”

The pumpkins were ripe and ready by the middle of September at Morris Orchard. But, according to Barnes, customers don’t want to pick pumpkins in a field in 95-degree heat. The orchard is making up for the loss now as the weather has cooled.

Barnes said 30 years ago, people typically purchased one pumpkin each. Now, he sees families buying as many as 10 for decorating around the house.

Jordon Johnson, farm manager at Johnson’s Orchard, said the century-old farm in Bedford County mainly known for its apple harvest did not have an overly successful pumpkin patch this year.

“We’re not the best to grow pumpkins; we do better with apples,” he laughed. “With it being hot and dry we had to pick everything two weeks earlier.”

“We never got much rain since the end of August and maybe a little in the beginning of September,” he said. “The weather makes or breaks everything on the farm. Last year, it just would not stop raining; now we’re so far behind.”